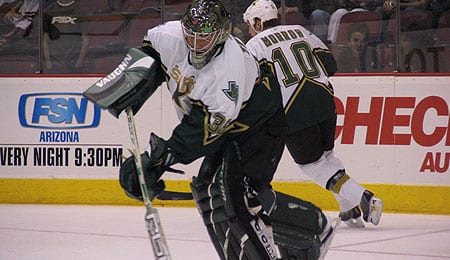 We advise steering clear of Marty Turco on Draft Day.

To supplement the 2009-10 RotoRob NHL Draft Kit, some of our hockey writers are participating in Fantasy Roundtables that are being organized by Kevin Orris at Fantasy Pros 911.

The Roundtables consist of writers from several noted Fantasy sites piping in with their opinions on various questions facing owners for the upcoming NHL season.

For the first edition, the writers were asked which goalies they planned to steer clear of on draft day. Steven Ovadia was representing RotoRob.com and he identified Marty Turco as someone he wouldn’t touch with a 10-foot pole.

Here is the complete Roundtable for your reading pleasure.

By RotoRob
This entry was posted on Saturday, September 19th, 2009 at 12:06 pm and is filed under Busts, HOCKEY, RotoRob, Steven Ovadia. You can follow any responses to this entry through the RSS 2.0 feed. You can leave a response, or trackback from your own site.