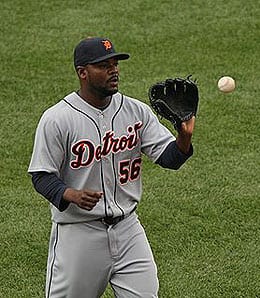 With his recent histrionics, Fernando Rodney has earned himself a mini break.

Jim Johnson has now racked up eight saves since taking over as closer from the traded George Sherrill. He did have an ugly outing (think Brad Lidge ugly) on September 2 against the New York Yankees who battered him around for five earned runs. Johnson failed to record an out in that game. He also took a loss on August 27 against Cleveland so he’s not been a shut down guy by any means. The Os will continue to run him out there to see what they have in Johnson, but I’m curious to see what would happen if Danys Baez got a chance — control problems notwithstanding, he’s pitched very well since the end of July. Consider Johnson a low-end Fantasy reliever going into next season with Chris Ray lurking in the shadows. In other words, don’t invest heavily.

After struggling, but finally nailing down a tough save on Friday, Fernando Rodney threw the ball into the press box out of frustration. He was handed a three-game suspension for his actions, but has appealed the decision, so it may get reduced. You would be wise to grab Brandon Lyon if you have the spot in the hopes that he give you a couple of cheap saves. While Rodney has had a fine season, blowing only one save, Lyon got back-to-back saves on the weekend when Rodney needed some rest. With the Tigers leading the American League Central Division, Rodney will be a big part in determining how far the Tigers go. He’s got to keep his cool and keep closing out games.

After a couple of sub par outings at the end of August, Joakim Soria has been back to his usual self and is now closing in on a second straight 25-save season. Unfortunately, he’s just not getting the opportunity to close out games because the Royals suck so bad. While I don’t subscribe to the theory that you have to have a closer on a winning team to rack up lots of saves, at least there is hope at getting a save when your team is winning. No such luck for Soria.

Normally, I don’t have to write much about the Twin pen because Joe Nathan is so dominant, but his outing on Wednesday. Nathan had one of the worst outings of his career when he gave up four earned runs to take the loss against the Chicago White Sox. I’ll probably never get to write something like that again about Nathan so it is worth noting. Yes, is was an ugly performance. No, I wouldn’t worry one bit. In fact, he’s bounced back since then with two flawless saves, giving him 37 in 42 tries.

While Mariano Rivera was dealing with a sore groin last week (that happens to us old people), Phil Hughes stepped into the closer role and looked fantastic. After lasting a month as a starter this year, Hughes has worked in middle relief and looked pretty damn good, lowering his ERA from 8.49 to the low 3s (although he gave up a key game-tying homer in the eighth Tuesday). Could this be the true calling for young Mr. Hughes? I’m not sure, but if something happened to Rivera the Yanks have to like the Hughes’ option. Keep in mind the Rivera turns 40 later this year. Taking a flyer on Hughes in 2010 would not be such a bad thing. He might turn into the dominant starter that the Yankees always envisioned him being, or he could turn into the next Rivera. Each option is pretty good. Of course I won’t totally throw out the possibility that he washes out completely in either role, but I’m thinking positive today. As for Rivera, he recorded a save and then earned his second win the next night, so he’s obviously just fine, thank you very much.

The Ray pen is starting to come apart at the seams. Closer J.P. Howell has blown one save and suffered another loss in September. Since the start of August, he’s scuffled along with a 1-3 record, three blown saves and an ERA north of 7.00. Fortunately for Howell, the rest of the pen hasn’t been any better, illustrated by Sunday’s meltdown — during which five Ray relievers combined to help blow a lead against the Detroit Tigers. Grant Balfour, Howell, Russ Springer and Randy Choate couldn’t shut the door as the Tigers the loaded the bases for Brandon Inge’s grand slam. Howell has pitched over his head this year and may have hit the wall. Dan Wheeler might be worth a look if you’re desperate for saves. Of course, the fact that Wheeler coughed up a game-winning homer to Nick Swisher Tuesday night didn’t exactly earn him points in Joe Maddon’s book.

Jason Frasor keeps getting the job done for the hapless Jays. Since taking over for the injured Scott Downs, Frasor has done a fine job in limited opportunities (he’s 7-for-9 in save chances) – so much so he’s kept the job even though Downs is now healthy (and racking up the holds). For those looking to next year, Downs and Frasor are both worth taking a long look at.

By Todd Habiger
This entry was posted on Wednesday, September 9th, 2009 at 3:02 pm and is filed under BASEBALL, Saving Grace, Todd Habiger. You can follow any responses to this entry through the RSS 2.0 feed. You can leave a response, or trackback from your own site.