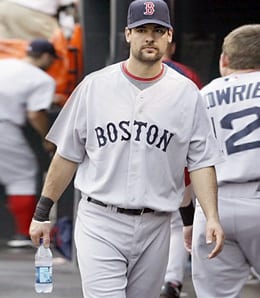 Since landing in Boston, Casey Kotchman has excelled at carrying water bottles.

Since arriving in Boston, Casey Kotchman has been all but buried on the bench, getting a mere 25 at-bats since August 10.

Of course, the fact that he’s managed just five hits in this stretch isn’t exactly prompting Terry Francona to dole out any more PT to him.

Obviously, it’s pretty hard to be productive when you’re not playing, so at this point Kotchman is completely useless in mixed leagues (unless you’re in one of those 45-team thingamabobs).

It’s a bit of a shame, because this still just 26-year-old enjoyed a huge July, batting .320 with a 934 OPS and four dingers. August, however, was a completely different story as Kotchman managed just a .216 mark.

Kotchman, who spent years as an injury waiting to happen, finally got a full season under his belt in 2008, and now that he’s landed on a deep Red Sox team (that also added Victor Martinez at the deadline), he’s been reduced to a part-timer.

But we should try to find something good to say about him. Alright, here’s two things: he’s raised his walk rate significantly this year, and he’s about to enter his “prime” power years. But Kotchman has slugged only .400 this season, and that ain’t gunna cut it as a first baseman, especially in the American League.

Modest power might have been a bit easier to swallow had Kotchman developed into the sure fire .300 hitter everyone and his brother projected him to be. But the sad fact is that his .275 mark this season represents an improvement, and unfortunately the way he’s going now, that BA could wind up much further south before this season has wrapped.

To make matters worse, his strike zone judgment – usually top notch – has not been as sharp since he arrived in Boston, although to be fair, it’s a pretty damn small sample size given his lack of PT opportunities.

Heading into the season, we projected Kotchman as a top 25 first baseman, but also expressed concern over his lack of power. With a month to go, he’s barely been a top 40 first baseman.

The BoSox head to Tampa Bay this week, so that might spur Kotchman, a St. Petersburg native. Right? Uh, maybe not. Over the past three seasons, his play at Tropicana Field represents his worst performance of any park that’s he’s had at least 15 at bats in.

The bottom line here is that Kotchman is barely worth owning even in AL-only leagues at this point. In fact, it would have to be a deeper league for me to even consider him as an option.

Sure, he’s still young enough to finally put it together, but it’s become obvious that he won’t ever approach the stardom we all once envisioned.

By RotoRob
This entry was posted on Tuesday, September 1st, 2009 at 10:41 am and is filed under BASEBALL, Daily Dump, RotoRob. You can follow any responses to this entry through the RSS 2.0 feed. You can leave a response, or trackback from your own site.