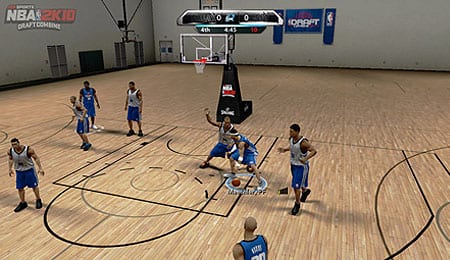 NBA 2k10: Draft Combine allows you to create your own NBA hopefuls.

Although the NBA season is still nearly two months away, 2kSports is giving hoops fans a chance to get a jump on the 2009-10 campaign and start their virtual professional careers early with the release of NBA 2k10: Draft Combine. Here you’ll create your own player from scratch and run them through a series of drills and games to increase their skills while attempting to climb up the draft board. When you’re done you’ll upload your created player, which will then allow you to import them into NBA 2k10’s “My Player” career mode when the full version is released in October.

Anyone familiar with the NBA 2k series will feel at home with the controls. Those that aren’t may find things slow going since there’s no built-in tutorial. All the in-game moves can be found under the “How to Play” tab, but it’s nothing more than a list of button and stick commands. However, once you get the feel for handling your player you’ll find a tight, responsive game that allows you to pull off some really fluid movements.

It’s not a flawless setup, as I do feel that there are times when I’m close enough to the hoop to enter into a layup or dunk animation and it doesn’t trigger. Needless to say, it can be annoying watching your player rim out a four-foot baby hook shot when he had a clear path for a jam. Also, when trying to lock down on defense the player you’re guarding seems to slip your defense unnaturally at times. They’re minor issues, though, and the overall controls are very good.

The player models look good and the animations are smooth, which are the most important elements when dealing with a basketball game. It’s worth noting that you’ll be dealing exclusively with computer generated players here, which means no running into Blake Griffin or Stephen Curry during the combine. Instead they’re all generic models with no real-life counterpart to compare them to, a fact that limits the amount of graphical flexing on display here.

You’ll be running all your drills and games in the Attack Arena in Chicago. The court itself looks fine, but it gets a little stale to have every single aspect of the game play out in one venue. It would’ve been nice if the scrimmages were moved outside to a park just to give things a bit of a different feel.

On the audio side, this game takes a minimalist approach. Since all the games are contested in an empty arena, there’s no commentary or crowd noise. Instead you’ll be hearing one of a handful of songs playing in the background accompanied with some on-court chatter. There were a few memorable moments during my run through the combine on the audio side, most notably a loud yell on an and-one dunk, but for the most part it’s just sort of there.

NBA 2k10: Draft Combine begins with you creating your virtual doppelganger in tremendous detail, selecting everything from height and weight down to what brand of shoe your player will wear (and yes, you can rock some sweet Jordans!). Beyond customizing your look, you’ll also be given the opportunity to tailor the way your player moves on the court, choosing how he executes a crossover dribble or shoots a jump shot. It’s a really deep interface that allows for a level of customization usually reserved for wrestling titles, and it helps make your player feel unique.

Once you’ve crafted your future superstar you’ll be thrown into the game itself. You’ve got four options, but only two of them (drills and games) affect your player (shootarounds and scrimmages have no impact on your player’s attributes). There are eight different drills to choose from, each targeting a different skill. You’re allowed to complete six drills total, and you’re free to do the same drill six times, six different drills once each or any other combination. There are three achievable levels per drill (gold, silver and bronze), and the better you do, the more your player improves.

You’ll also take part in six five-on-five games against other draft hopefuls. These are when you need to bring your “A” game as strong performances here equate to a lot of skills points, which are required to improve your player’s abilities. Before each game, the 2k Insider, which acts as an advisor, will give you three goals. One will be on offense (such as shoot better than 47 per cent), one on defense (hold the person you’re guarding to two or fewer three-point attempts) and one will be team oriented (achieve a teammate grade of C-plus or higher). The more of these goals you meet, the more points you’ll be awarded after the game.

Instantaneous feedback on your performance will be presented to you throughout each game. For instance, you might throw a nice pass to a teammate that leads to a basket. In that case you’d see “good pass” and “assist” in the corner of the screen, and your teammate grade would be positively affected. If you turn the ball over or hoist wild shots, your grade will go down.

It’s a good idea, and it is usually well executed, but you’re sure to encounter some instances where the feedback is unfair. One example occurred late in a quarter when I got the ball and held it near centre court to run down the clock and take the final shot. As I waited, the game dinged my grade for “holding the ball too long.” You’ll also see “good pass” turn into “bad pass” when your teammate fumbles the pass away.

On defense, the game never recognizes switching, which means if you’re a point guard you’ll be held accountable for all points scored by the opposing PG, even if you switched on a pick and roll and are defending the small forward when he scores. This is an oversight as it makes it more important to stick to your man no matter what, rather than play solid team defense. Thankfully, though, the grading system feels right much more than it feels wrong.

After each game you’ll see if your draft stock has gone up or down. Despite some pretty good games I never climbed out of the bottom half of the second round, which makes sense considering the top players on the leaderboard only achieved a 55 overall ranking — hardly first-round material. Once you’ve completed all of your games and drills you’re done until NBA 2k10 is released as the actual drafting of your player will take place in the full game.

For anyone planning on playing through the “My Player” mode in NBA 2k10, getting a head start with the Draft Combine is definitely a strong investment. You get to improve your player’s attributes and draft status all for the eminently reasonable price of 400 MS Points ($5). For those on the fence, there’s actually a lot of variety to the type of player you can create. Enough variety, in fact, that you could invest many hours trying different combinations all while brushing up on your skills for NBA 2k10, which makes this a solid value for more than just hardcore players.