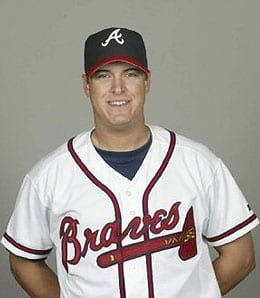 Kelly Johnson hasn’t had a hell of a lot to smile about this year; nor have his owners.

After taking two of three from the Florida Marlins on the weekend, the Atlanta Braves have now moved into sole possession of second place in the NL East. They’re just a half game behind the Giants in the NL Wild Card race, but Wild Card leader Colorado continues to surge, and has put 4.5 games between itself and Atlanta. And despite the fact that the Braves have played well lately, the Phillies have been that much better, opening up a seven-game bulge in the East.

But this coming week could very well dictate if the Braves have a legitimate shot at the postseason or will be playing out the string in September.

Starting Tuesday, the Braves host the scuffling Padres for a three-game set, and you’ve got to figure a sweep is a real necessity, especially considering that next weekend Atlanta heads into Philly for a crucial three-game set. By this time next week, we’ll have a much clearer idea of where Atlanta stands in the playoff race.

The Braves’ rotation has been very strong this season, but team speed has been a weakness. In fact, the only Brave with double digit steals is Nate McLouth, who has only been in Atlanta for a third of the season and is currently on the DL.

One of the team’s bigger disappointments this year has been Kelly Johnson, who has now gone more than two weeks since his last hit. On Sunday, he showed some signs of life, drawing two walks and scoring a pair of runs, yet his funk has grown to 0-for-13. Johnson also committed his ninth error as his glovework has slipped along with his hitting skills.

He’s batting just .154 with a 675 OPS for the month and has recently been losing playing time to Omar Infante. Johnson simply has not been getting on base enough to be useful. It’s a trend that’s been going on for a couple of years, actually, but the disintegration on his OBP this year is alarming. In 2007, Johnson’s breakout year, he had a very fine .375 mark. Last year that dipped to .349, but he somewhat compensated for that with more doubles, more steals and a higher BA. This season, however, Johnson’s OBP is an unacceptable .295.

Also alarming is his complete inability to come through in key situations. Johnson is one of the worst hitters in the NL when it comes to batting with runners in scoring position and two outs, having gone a mere 3-for-26 (.115) in this scenario.

He’s at that magical age 27, but we’re not seeing a significant hike in his power, so at this point, I don’t believe there’s much point of owning him in a standard sized mixed league.

Granted, Johnson was hurt most of July, and at that time Martin Prado took over for him, but if Johnson doesn’t get his act together pronto, Prado could steal the second base job outright once he gets over his headache issues. If there are better options out there – which is highly likely depending on how large your league is – I’d go ahead and dump Johnson.

By RotoRob
This entry was posted on Tuesday, August 25th, 2009 at 12:20 pm and is filed under BASEBALL, Daily Dump, RotoRob. You can follow any responses to this entry through the RSS 2.0 feed. You can skip to the end and leave a response. Pinging is currently not allowed.