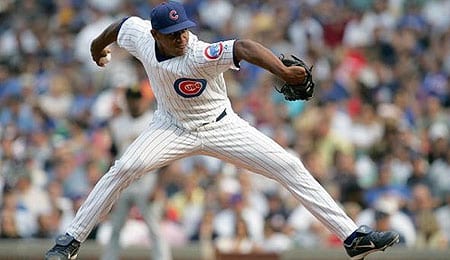 How long until new Cub closer Carlos Marmol’s control gets the best of him?

The Cubs’ most recent skid – combined with the Cardinals continuing to roll – has seen the NL Central deficit grow to eight games for Chicago. Houston, playing a bit better lately, has pulled within two games, even threatening the Cubs’ grip on second place in the division.

Of greater concern, the Cubs have now dropped to fifth place in the Wild Card race, two games behind the Marlins. It’s put up or shut up time for the Cubs.

Fortunately, the team kicks off a fairly easy (if anything can qualify as easy for these guys) 10-game homestand on Tuesday with the Nats (three games), Mets (three), Astros (three) and White Sox (one) all making stops in Wrigley over the next week and a half. The Cubs must win at least seven or eight games over this stretch, or it’s lights out.

Now that the Cub ownership has finally switched hands, it’s a reasonable first question by the new owners to ask “who’s to blame?”

Certainly the offense – not productive enough to overcome its lack of speed – has been a culprit, but today, we’re going to focus on the team’s bullpen failings. While the Cub rotation has been the saving grace of this team – and probably the only reason they don’t have a losing record – the bullpen has not gotten it done.

We’ve already discussed the failings of Kevin Gregg, recently yanked out of the closer role for Carlos Marmol – whose control issues may soon have Cubbie fans reaching for their Maalox. John Grabow is another arm we’ve already discussed – and he’s been a real stone wall since the Cubs acquired him, but today we’ll examine some of the team’s other relievers.

For starters, Aaron Heilman has been considered by many to be a serious waste of money for the Cubs this season. Things have been going somewhat smoothly for him lately, as Saturday he tossed 1 1/3 shutout frames for his third straight scoreless outing, helping bring his August numbers down to a far more respectable level. Heilman’s ERA was ugly in July despite a .245 BAA, yet he’s been hit at a .281 clip this month and come out with a far better ERA.

Of course, this is the lot in life of relievers, whose numbers are often skewed by a couple of bad outings. Then again, there’s nothing positive to extract when looking at Heilman’s 4.80 ERA since the All-Star break.

He’s been easier to hit this season, and his command has gotten worse, yet somehow his 4.45 ERA overall is much better than what he managed in 2008. That tells me he’s been extremely fortunate, and really hasn’t made any progress at all. Heilman might be worth a look in an extremely deep NL-only league, but when he got a chance to have real value last season with the Mets, he failed miserably. Small wonder the Mets dealt him away.

It will be very interesting to see if the Cubs are willing to risk Heilman getting a raise on his current $1.625 million salary in arbitration this offseason. Perhaps they will just cut their ties with Heilman, one of many players whose massive underachievement has helped the Cubs dig this whole for themselves.

Jose Ascanio, a young reliever we identified as someone who could help the Cubs last season, pitched decently this year, and the team was able to parlay him as part of the deal that landed them Grabow and Tom Gorzelanny, so that has to be considered a bonus. The fact that shortly after landing in Pittsburgh Ascanio wound up on the DL underscores that there are teams that are even more cursed than the Cubs.

Angel Guzman was another possible replacement for Gregg at closer, and why not? He’d been absolutely superb since May. And it may still happen, but right now Guzman’s value is taking a major hit. He got shellacked on Thursday against the Dodgers, serving up a gopher ball for the second straight game, and suddenly his August ERA stands at an unsightly 6.55. Not exactly the stuff closers are made of, right?

Still, having finally been converted to a reliever on a full-time basis this season, Guzman has really found his niche. He’s pitching to contact (his K/9 is at its lowest ever) and it’s working, as he’s inducing more ground balls than ever and has become nearly unhittable (.205 BAA) as a result. Unfortunately for those you that have been scooping Guzman up in deeper NL-only leagues in anticipation of Marmol’s stint at closer being a short one, Guzman’s recent performance isn’t going to convince Lou Pinella that he employed the wrong man to replace Gregg.

By RotoRob
This entry was posted on Monday, August 24th, 2009 at 11:16 am and is filed under BASEBALL, RotoRob, Team report. You can follow any responses to this entry through the RSS 2.0 feed. You can skip to the end and leave a response. Pinging is currently not allowed.