Saving Grace: Fuentes Back on Track 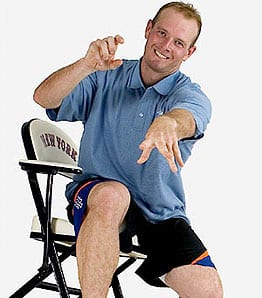 The Red Sox finally reeled in Billy Wagner, but don’t expect much.

Jim Johnson has done a fine job since inheriting the closer role after George Sherrill got traded. On Sunday, he gave up just his second run as closer, but still managed to hang on for a shaky save. The prevailing wisdom out there is that you have to be a closer on a winner to get lots of saves. That has been proven wrong time and time again, but people still spout it like it’s gospel. Johnson is a fine option in all leagues. Yes he’s going to get less chances than most because the Orioles will win less games than, say the Yankees, but there is no reason he can’t rack up a good number of saves in the meantime as long as he makes the most of his opportunities. And bear in mind that weaker teams tend to be involved in closer games when they do actually win, so virtually every W may result in a save chance.

The on again, off again saga of Billy Wagner to the Sox is back on. Wagner has waived his no trade clause and accepted the deal to Boston, now that the Sox have agreed not to pick up his 2010 option. However, Boston can still offer him arbitration, something that may lessen the demand for Wagner in the offseason, as any team signing him would forfeit a draft pick to the Sox, but if he pitches well in a playoff run some teams might still come calling. There are also reports that Wagner is supposed to pitch only once every three days. I wouldn’t go grabbing Wagner expecting help for this year, but he’s worth a flyer for next year. Jonathan Papelbon wasn’t real keen on bringing in Wagner, but he’s changed his tune since the deal was finalized. It makes me wonder how Papelbon is going to react to a guy with close to 400 career saves around. Is it an ego thing or does Paps think the pen is fine as it is? I believe you can never have too many good arms in the pen, and the BoSox have had one of the best bullpens in the league this year. Hideki Okajima has been great in 8th inning work (and he won’t lose his job to Wagner), while Takashi Saito and Manny Delcarman have done well to bridge the gap between starter and closer (you can toss Daniel Bard and Ramon Ramirez into that mix as well). Where Wagner fits in is anyone’s guess, but Terry Francona has been a master of massaging egos and finding playing time for all his guys. He’ll have his work cut out for him again.

Bobby Jenks seems to have gotten over his kidney stones and is back to racking up saves for the contending Sox. While he has been allowing way too many hits, he’s been turning it on at all the right moments. Jenks might not be good for your blood pressure, but at the end of the day a save is a save. And despite his vulnerability, Jenks is more or less getting the job done.

After some initial American League jitters, Chris Perez has been virtually unhittable since early July. He’s looking like the dude most of us thought he would going into Spring Training. With Kerry Wood around, Perez isn’t going to see any save opportunites (heck Wood hasn’t seen a save opportunity in 20 days), but he’s a good bet for the future.

Fernando Rodney keeps on chugging along. With only one blown save in 29 tries this year, he hasn’t got his due credit. His ERA and WHIP are a little higher than you would like to see, but the man has got the job done when it’s counted. I wouldn’t bank on Rodney long term, but for the rest of this season he looks like he could be money in the bank.

The normally dominant Joakim Soria has looked downright bad lately, giving up eight earned runs in his last seven games. Maybe it’s depression from watching the Royals slosh though another wasted season or maybe there’s something wrong. He did spend some time on the DL earlier this year, so an injury can’t be out of the question. There’s been a lot of shakeup in the Royal pen as Juan Cruz was placed on the DL, Ron Mahay was released and Kyle Farnsworth was activated from the DL. Farnsworth will get the first look if there is something wrong with Soria, although, he too was shellacked in his last outing.

After struggling at the end of July, Brian Fuentes has righted the ship and is pitching like the dominant closer he needs to be for the contending Angels. He’s got 35 saves, but an ERA and WHIP much higher than normal to go along with that. In reality, that often doesn’t matter in Fantasy baseball as long as he’s racking up the saves.

I never get to write about Joe Nathan because he’s so damn good. So what the heck, I’m going to mention something about him right here. He’s got an ERA well under 2.00, a WHIP under 1.00 – now that’s sweet. If you have him on your team you’re one lucky person. You don’t have to worry about his bad numbers affecting you because there are rarely any bad numbers (although he did actually blow a save last week). Nathan is truly one of the elite closers in the game.

I just realized the Mariano Rivera is four months younger than I am. He’ll turn 40 in November and he’s been outstanding this year. A sub-2.00 ERA and sub-1.00 WHIP are great from a 30-year-old, but for a guy pushing 40 it’s phenomenal. I guess if I had 15 million reasons to stay in shape I might do better than pushing down brewskis and HoHos like they’re going out of style, but at an age when lots of players start to lose it, Rivera’s accomplishments shouldn’t be overlooked.

Remember way back at the beginning of the season when Joey Devine was thought to have a leg up on the Oakland closer gig only to get hurt and turn things over to the immortal Brad Ziegler? That seems like such a long time ago given that Andrew Bailey has emerged as the go-to guy out of the Oakland pen. Although he’s pitching for a bad A’s team, he’s done his job well with outstanding numbers across the board, putting himself into the AL ROY picture. Bailey could establish himself as one of the top closers next year with a full season under his belt.

The wheels may be coming off for David Aardsma and his wild ride from obscurity. It shouldn’t taint what he’s accomplished this year, but lately Aardsma has been very hittable lately, taking a couple losses and giving up six earned runs in his last six outings. His numbers are still good and he could still right the ship, just tread very carefully here if you’re in contention for your league title and saves are tight.

The official unofficial closer of the Tampa Bay Rays, J.P. Howell, blew his sixth save of the year on Saturday. He hasn’t pitched since then so expect him to get some work soon be it in a save situation or otherwise. Howell’s numbers are still good despite being a little more hittable in August than he has been previously. For a closer on a contender, he doesn’t have a ton of saves which should be of some concern. Keep an eye on how the Rays use their bullpen the rest of the year. I wouldn’t expect Howell to be closing again next year despite his fine year.

Hey, Frank Francisco made it through an entire two weeks without getting hurt. We should throw a party or something. He did suffer through and ugly outing on August 14 when the Red Sox smacked him around for six earned runs to send his ERA and WHIP in the wrong direction. Francisco also looked pretty shaky Tuesday in nearly coughing up a lead to the Yankees. He’s still a viable option in all leagues as a couple of bad outings does not make a bad season, but just hurts your overall numbers. Still, beware of the injury bug. C.J. Wilson is still worth hanging on to in AL-only leagues. He can go longer than Francisco and has shown he has the stuff to close.

Poor Jason Frasor, he gets the opportunity to close and there’s nary a save to be had. On the bright side, Frasor hasn’t given up an earned run since early July. He’s worth using. The saves will come – someday. Note, however, that he’s been complaining of some shoulder tendonitis, so that’s worth monitoring.

By Todd Habiger
This entry was posted on Wednesday, August 26th, 2009 at 3:51 pm and is filed under BASEBALL, Saving Grace, Todd Habiger. You can follow any responses to this entry through the RSS 2.0 feed. You can skip to the end and leave a response. Pinging is currently not allowed.