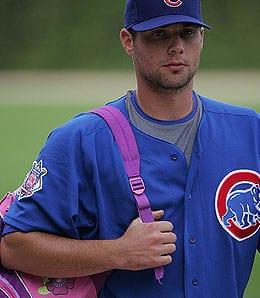 Don’t let Randy Wells’ taste in knapsacks deter you from adding him to your team.

Once again, I must express surprise by the lack of respect that rookie righty Randy Wells of the Cubs is receiving in Fantasy circles.

The 26-year-old won five games in July, and has sported an even lower ERA this month, despite taking one serious ass-kicking in Coors. Wells started the month by pitching shutout ball into the eighth inning in Cincy, good enough for him to win his fourth straight start. Then came the beat-down in Colorado, but since then he’s responded with back-to-back quality outings, including 6 2/3 innings without an earned run allowed in a tough-luck loss Friday night.

Okay, his .280 BAA this month is not sparkling, but Wells has overcome that by displaying solid command all season long, and he’s turned into a real workhorse in that Cub rotation.

So, why, oh why, is he still potentially available in some smaller NL-only leagues? And why hasn’t Wells been scooped up in more mixed leagues – especially those of the 4×4 variety?

It might be time for you to ask yourself that question should you be seeking some pitching help down the stretch.

By RotoRob
This entry was posted on Sunday, August 23rd, 2009 at 1:23 pm and is filed under Another Look, BASEBALL, RotoRob. You can follow any responses to this entry through the RSS 2.0 feed. You can leave a response, or trackback from your own site.