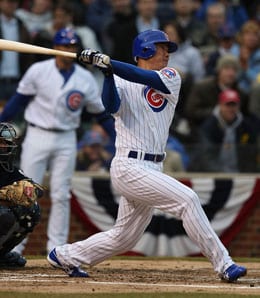 Kosuke Fukudome has been dropped to fifth in the Cub order, but he keeps raking.

Alfonso Soriano, who finally woke up last month (five homers, 16 RBI, .345 BA) after a couple of miserable months, has gone right back into the tank lately. A dreadful final three games against the Rockies (2-for-13) has left him batting just .194 this month with one homer, no steals and a pathetic 500 OPS. Soriano’s owners have to be pleased that he’s remained healthy this year – he’s on pace to have the most at bats he’s had as a Cub yet – but given that his overall numbers are down substantially, it’s cold comfort. Soriano’s current .250 BA would mark his lowest ever since he’s become a full-time player. And where in the hell has his speed gone? Yes, I get that the Cubs aren’t much of a running team in recent years, a fact borne out especially so this year as they are dead last in the NL in thefts. But, as Gob would say in Arrested Development: “Come on!” This dude swiped 41 bags in his one and only season in Washington in 2006 and since then has a combined 46 in nearly three seasons with the Cubs. Soriano’s never-exactly-awe-inspiring walk rate has dipped a bit, too, but not enough to explain his low numbers. Hell, he’s even struggling defensively. What’s even weirder was that Soriano got out of the gates blindingly fast, even earning a nod on our early-season All-Star team. Now, remember that Soriano has been a slightly better second-half player in recent years, so there is hope, but the fact that Lou Pinella yanked him out of the lead-off spot and dropped him to sixth in the order about a month ago does not bode well.

Speaking of struggling, the Cubs dropped three of four in Colorado, and have now fallen three games back of the surging Cardinals in the NL Central. Below them, third-place Milwaukee is inching closer. Fortunately, the Cubs have a glorious chance to turn things around in the next little stretch, with a home stand against suddenly struggling Philadelphia followed by a home series against always struggling Pittsburgh. It’s then off to San Diego for a three-game set against a Padres team that is playing better lately, but is obviously going nowhere fast. This next week and half is pivotal for the Cubs who really need to win six or seven of these nine games to make some headway on the Cards. The Cubbies, who are six games over .500, have had their trouble with the Phils, losing two of three in Philly last month, and four of their last five against them overall.

Once Soriano was shifted out of the lead-off slot, Kosuke Fukudome got his chance at the top of the order, but Pinella – who has been doing plenty of tinkering lately – made another switch on the weekend, installing Ryan Theriot as the number one hitter. Theriot has taken to the change immediately, delivering three hits Saturday to break out of a 1-for-12 skid, and recording his third straight multi-hit game on Monday (7-for-14 in three games since the shift). He had a decent July (.306, five steals), but he’s absolutely on fire in August, batting .379 with one swipe. The closest thing the Cubs have to a stole base threat (he’s done a better job picking his spots on the base paths this year, going 15-for-20), Theriot has already set personal bests in triples, homers and – unfortunately – strikeouts. And he’s definitely on his way to career highs in plenty of other categories, including at bats and runs. While his BA has slipped slightly from last season, the way Theriot is smoking the ball lately, he’s likely to reach or surpass last year’s mark. It’s conceivable that he’s been dropped from shallower leagues, and if so, he definitely deserves another look. Okay, the power he flashed earlier this season has waned, but that’s no big shock – we called that one. Regardless, Theriot is pretty darned close to being a top 10 Fantasy shortstop now, making him a must-own in standard leagues.

Another Cub who has benefited from Pinella’s experiments is the scorching Milton Bradley. Moved to the two-hole, Bradley has stepped up, and has now hit in five straight games. In fact, he’s batting .400 over his last 11 games as he continues to put a lackluster start to the season in the rear view mirror. There haven’t been many good things to say about Bradley’s first season as a Cub. Okay, okay, he’s cut his K rate. There…that’s positive. However, his overall numbers are way down – thanks in huge part to his massive struggles batting from the left side (.230 BA) and a groin problem early in the season didn’t help matters. But the dude sure looks healthy now, and he’s starting to rake. He definitely no longer looks like a platoon candidate, finally overcoming his season-long woes against lefties. If Bradley has been dropped in your league – and it’s quite possible – now is the time to consider rectifying that situation.

Derrek Lee has also put a crappy start well behind him. Check out his OPS by month: April 537, May 955, June 973, July 1027, August 1054. Notice a trend here? Okay, Lee is no longer a stolen base threat, and that affects his Fantasy value, but after a .189 April, he’s managed to get his BA right back to where we expected. He’s doing a great job of getting on base and is enjoying a very solid campaign. And despite going hitless Monday, Lee is still batting .328 with five homers and 14 RBI in his last 16 games. We projected him to be a top 15 first baseman, and he’s pretty much been exactly that, but if he finishes the season out as strongly as he’s performed in recent months, he’ll force his way back into the top 10.

By RotoRob
This entry was posted on Tuesday, August 11th, 2009 at 8:38 am and is filed under BASEBALL, Fantasy Notes, RotoRob. You can follow any responses to this entry through the RSS 2.0 feed. You can skip to the end and leave a response. Pinging is currently not allowed.