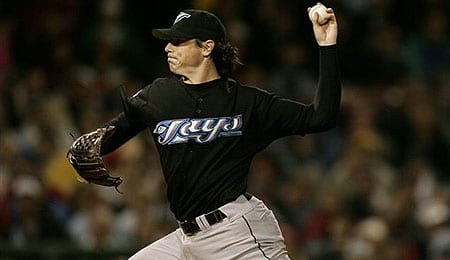 Scott Downs’ injury has once again spurred the DH vs. no DH argument.

Week 11 of the 2009 campaign proved to be a period of many firsts. The Blue Jays found a new way for a pitcher to end up on the DL when Scott Downs — that noted slugger — sprained his toe in an effort to prove that AL pitchers can be a force at the dish. Russell Martin managed to hit his first homer of the season Saturday. Who had June 20 as the day he’d break his 2009 power cherry? Certainly not the many Fantasy team owners that made Martin an early choice in Fantasy league drafts. Kenshin Kawakami and Daisuke Matsuzaka faced off at Fenway in their first matchup in North America with Kawakami getting the better of his former NPB rival. There is definitely something wrong with Dice-K. Sit him on your bench for now, but have patience grasshopper, the real Dice-K will return. The Tigers recalled the operatic Alfredo Figaro to replace the again squirrely Dontrelle Willis and he managed his first Major League win Saturday against the Brewers. Quite an accomplishment with the way Milwaukee has been pounding the ball.

Last, but certainly not least, another first is just around the corner as it’s time for that first road trip of the year for yours truly. I turn the Troll over to the trusty hands of our fearless leader, RotoRob, for the next couple of weeks as I venture south into the land of beer and brats. You just have to love them Miller Park brats!

Scott Rolen, 3B, Toronto Blue Jays: In an effort to wake up the sleeping bats of both Vernon Wells and Alex Rios, the Jays have moved Rolen into the clean-up slot and he has responded in fine fashion. In the past week, he’s gone 12-for-28 at the dish, with one homer and five RBI. We’ll probably never again see the power that Rolen demonstrated earlier in his career, but that great batting average and the improved RBI opportunities that come from batting fourth makes him an attractive investment in all formats.

Kyle Blanks, 1B/OF, San Diego Padres: The Padres have looked to the farm in an effort to boost their struggling offense, recalling top prospect Blanks. At Triple-A Portland, he hit 12 homers with 38 RBI. The Padres already have Adrian Gonzalez entrenched at first base so they’re converting the 6’6″, 285-pound Blanks into an outfielder. Stumbling San Diego isn’t going anywhere this year so the opportunity for regular playing time for this giant should not be an issue. Blanks should be owned in NL-only and keeper leagues, and be on the radar in 12-team mixed formats.

Ryan Church, OF, New York Mets: In the past week, Church has managed a solid .304 BA with three RBI and a couple of thefts. It seems that Jerry Manuel is committed (or at least he should be) to using Church on a regular basis in the Met outfield. If you remember his solid start last season before being derailed by multiple concussions, then you know that Church is definitely a player to watch. He should be rostered in NL-only leagues and monitored very closely in the next week or so in standard 12-team leagues. He has done it before, so why not again?

Alfredo Figaro, SP, Detroit Tigers: The Tigers have turned to the 24-year-old Figaro to fill the slot in the rotation formerly occupied by Willis who hit the DL with, yes, you guessed it, another anxiety disorder (I believe the Latin terminology for this condition is Ikantthrowstrikesasitis). In his first start Saturday against the Brewers and the hot-hitting Prince Fielder and Ryan Braun, he allowed eight hits, two walks, only two earned runs while striking out seven in five IP. It was a definite improvement over what we’ve grown accustomed to seeing from Willis and a performance that definitely makes Figaro worthy of a waiver wire bid in AL-only formats.

John Mayberry, Jr., OF, Philadelphia Phillies: If you’re looking for a short-term fix in your outfield, Mayberry could be just what the doctor ordered. The son of former Royal/Blue Jay slugger John Mayberry, Sr., the youngster comes by his power honestly. Jr. hit his second homer of the year this past week and seems to be the favoured choice over veteran Matt Stairs in the Phillie outfield while Raul Ibanez is on the DL until early July. Mayberry is a solid acquisition in NL-only and keeper formats.

The Blue Jays Bullpen: Welcome to the game of “Spin the Closer.” This week’s contestants from north of the border are Jason Frasor, B.J. Ryan and Jeremy Accardo. As discussed above, this past week, Downs has proven beyond a shadow of a doubt why AL pitchers shouldn’t be subjected to ever holding a bat in their hands, let alone approaching the batters box. His injury has created a void in the closer role for the next several weeks and I’m giving the edge to Frasor at this time, but all three have a history in the role so don’t be surprised to see the dreaded closer-by-committee situation until Downs returns from the DL.

Khalil Greene, SS, St. Louis Cardinals: This past week we’ve seen the return of Greene from his stint on the DL with a social anxiety disorder (Greene was afflicted with the equally rare Ikanthitmywayoutofapaperbagitis). This is almost getting redundant isn’t it? Since returning, he’s flashing some of that power we saw earlier in his career with the Padres, with homers in back-to-back games this weekend. The Cardinals have moved him to third base in their latest attempt to find a replacement for Troy Glaus, something they haven’t been able to accomplish yet this year. Greene’s power potential out of the middle-infield could be a huge asset down the stretch for many a Fantasy team, making him a solid gamble in all formats.

Juan Rivera, OF, Anaheim Angels: Very quietly, Rivera has been enjoying a very solid 2009 season. Currently he has 10 long balls, 36 RBI and a great .316 BA. In the past week, he has been on an absolute tear with four homers, seven RBI, and seven runs scored. Get Rivera rostered quick if he’s still available in your league.

Brian Bannister, SP, Kansas City Royals: In his past three starts, Bannister has allowed a scant three earned runs. In 63 1/3 IP this year he has five wins, 40 Ks and a decent 4.10 ERA. The Royals are going to need his arm if they are to enjoy a solid second half. Bannister should be added in AL-only leagues and put on the radar in mixed formats.

Brad Bergesen, SP, Baltimore Orioles: In four of his past six starts, Bergesen has allowed no free passes. In his past five starts, he’s also allowing less than a hit per inning. Hmm, maybe the kid’s found a recipe for success? He’s currently sporting a 4-2 record with a 3.79 ERA. This 23-year-old is showing poise beyond his years and should be grabbed in all formats.

By Tim McLeod
Tags: Scott Downs
This entry was posted on Sunday, June 21st, 2009 at 12:29 pm and is filed under BASEBALL, The Wire Troll, Tim McLeod. You can follow any responses to this entry through the RSS 2.0 feed. Both comments and pings are currently closed.