Once again, like clockwork, Rotoman’s annual Fantasy Football Guide has hit the shelves, and once again, many of the fine pigskin pundits at RotoRob.com played a big role in making this excellent publication a reality. 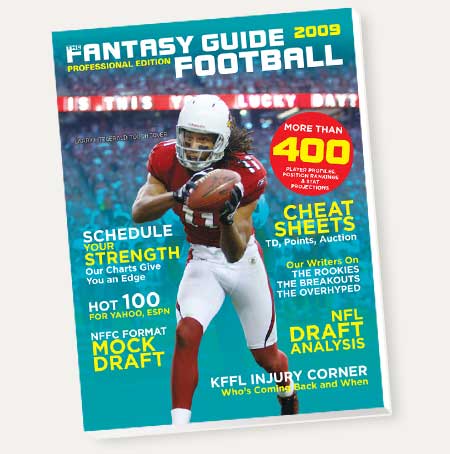 Andy Goldstein was instrumental in making the position pages come to fruition, while Derek Jones and Matt were among the contributing writers.

Everyone contributed to the front of the book Overlooked, Overhyped,
and Writers Poll.

Also included in this must-own book are sections on rookies, strength of schedule and projections.

A big change to the 2009 edition is that the capsules are split up by position, a feature we’re sure you’ll appreciate greatly.

When you march into your draft this year, make sure you are armed with The 2009 Fantasy Football Guide. Forget your beer? That’s okay – mooch off someone else. Forget your clothes? Hey, maybe it’s some kind of off-the-wall strategy to distract your opponents, but whatever works for you. No judgments here. But whatever the hell you do, do not forget this mag, available in stores now.

By RotoRob
This entry was posted on Wednesday, July 29th, 2009 at 8:04 pm and is filed under FOOTBALL, Magazine promo, RotoRob. You can follow any responses to this entry through the RSS 2.0 feed. You can skip to the end and leave a response. Pinging is currently not allowed.