Knicks Too Big (and Slow) For Their Britches 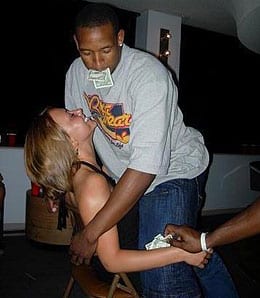 If Chris Duhon loses his starting PG gig, he has his career as a stripper to fall back on.

Do you know how you can tell a Knick fan?

Listen carefully. In quiet moments, the true Knick fan will start to quietly chant “2010” in times of stress and hopelessness.

This has been an especially brutal summer for Knick fans as the team was totally unable to sign any free agents. In fact, all of the interested free agents seemed to be using the Knicks as leverage with the teams they truly wanted to sign with. Witness Jason Kidd turning some Knick interest into a huge re-signing with the Mavs. Witness Grant Hill magically turning a Knick offer into a Phoenix offer. Heck, even Andre Miller walked away from New York, choosing instead to try his luck in Portland. Most impressively of all, Steve Nash used the notion of a possible Knick offer to get an extension from the Suns.

And so New York heads toward the start of the regular season appreciably comparable to last season.

Point guard Chris Duhon will once again have the fate of the Knicks heaped upon his shoulders, unless the Knicks can finally pull one out of the bag and sign Ramon Sessions away from Milwaukee, something they are apparently working on. However, the Bucks are likely to match any offer — which would be appropriate given the Knicks’ other scorned advances. Duhon started last season strong, but quickly burned out under the extraordinary number of minutes he had to play for a team with no other PG option.

The Knicks have reportedly retained Nate Robinson for another year (however, he could still leave in a sign-and-trade scenario), but he is streaky and a defensive liability. At best, he’s a good shooting guard off of the bench. Rookie Toney Douglas showed some promise during the summer league, but he’s very much an unknown quantity. The team loves him, however, and is hoping by 2009-10 that he can replace Duhon.

If the Knicks guard situation is still frighteningly bad, the frontcourt situation is a bit more upbeat. Centre Eddy Curry, his bloated contract and previously bloated belly, showed up to summer league having lost a lot of weight and seemingly ready to run in coach Mike D’Antoni’s speed-intensive system. Just two years ago, Curry seemed ready to erupt as a legitimate NBA big man. Then, Isiah Thomas traded for Zach Randolph, the paint got too crowded, and Curry receded and regressed. Then, under D’Antoni, Curry was simply never in good enough condition to play. To be honest, he didn’t look in good enough condition to change out of his clothes.

Danilo Gallinari and his fragile back are expected to make more of a contribution this season, too. Don’t sleep on this guy; he can still be a huge part of the Knicks’ future. If New York manages to retain restricted free agent David Lee (doubtful given all the rumours of him being dealt), the double-double machine who has no impact on games and interests no one else in the NBA, the Knicks could look good upfront for the first time since Patrick Ewing patrolled the Garden.

Factor in Darko Milicic, the centre who is, unfortunately, best known for being picked before Carmelo Anthony, Chris Bosh, Dwyane Wade and others in the deep 2003 NBA Draft, but who could finally become a monster along the boards; Wilson Chandler, an important team building block who took a major step forward last season; and Jordan Hill, who’s biggest crime is that he isn’t Stephen Curry, but will turn Knick fans in time — and you can see that the Knicks may actually have some talent up front. Which is pretty funny, since D’Antoni’s run-and-gun system hinges on talented guards and doesn’t require much size.

So going into the season, so far, the Knicks have size they don’t need and still require better guards. The odds of anyone coming in aren’t great as the Knicks are firmly committed to clearing as much cap space as possible for the 2010 free agent class — a class that might not ever see free agency. After all, why would LeBron James leave Cleveland for a team without a genuine NBA point guard?

So we have a big Knick team playing for a small-ball coach waiting to sign players who might not ever be available.

By Steven Ovadia
Tags: New York Knicks
This entry was posted on Thursday, July 30th, 2009 at 10:12 am and is filed under BASKETBALL, Steven Ovadia, Team report. You can follow any responses to this entry through the RSS 2.0 feed. Both comments and pings are currently closed.