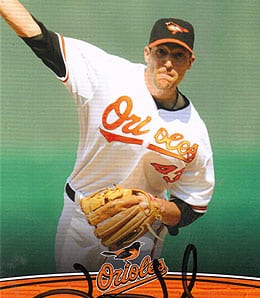 Jim Johnson could soar in value if George Sherrill is traded.

It’s a volatile time in the closing world. The trade deadline is just days away and names are flying around like sparrows. Some closers that were safe just a couple of weeks ago have suddenly hit hard times and, despite proclamations to the contrary, sometimes a manager has to make a change no matter how stubborn he is (are you listening, Ozzie Guillen?). So let’s take a quick look what’s going down.

George Sherrill has been far more hittable in July and has seen his name mentioned regularly in the rumour mill (to Philly, for instance). A Sherrill trade would send his value spiraling since it’s unlikely he’d land any place he could close. Looking at the Oriole pen, you can see there’s not a clear successor. Chris Ray is on the DL and has been ineffective this season coming back from Tommy John surgery. While his velocity is back he’s not been consistent in hitting his spots. I wouldn’t view him as an option to close this year, but he might be worth a flyer for next.

Jim Johnson has decent numbers, but he too has been very hittable as of late and is suddenly surrendering too many long balls. Danys Baez might also be another candidate to closer given his history in the role. The trouble is, he’s still nowhere near the pitcher he was back in his Ray days, and he suffered another loss Monday night. Working in his favour is he’s cut his walks this season, but that doesn’t help him if Baez can’t get an out (opponents batting over .290 against him this month).

Jonathan Papelbon is one of the top closers in that game, but it’s hard to get saves if your team isn’t winning games. The Red Sox’s recent troubles have hindered Papelbon’s value lately, but obviously that’s not to say you should go and drop him – I’m just saying. While I don’t talk about Paps much in this column since he’s as safe as they come, he has been allowing a few too many baserunners this season and he got rocked in blowing a save Monday night. While he has a sparkling ERA his WHIP is a little higher than you would like to see — especially from a pitcher who had the lowest WHIP through 200 career innings of anyone in MLB history.

Guillen says he’s going Tammy Wynette on all your asses and he will “Stand by Your (His) Man,” Bobby Jenks. Of course, Ozzie’s been known to flap his jaws just to make sure they still work. The point is, there may come a time when Jenks leaves him no choice but to make a switch. In seven July outings, Jenks has given up runs five times. Sure he’s nailed down four saves, but they sure haven’t been pretty and he can’t expect to keep his job with such crappy performances.

Octavio Dotel would seem to be next in line for saves, but after his brilliant April and May, Dotel was very hittable and saw his ERA climb in June. This month, despite control problems, he’s settled down. The Sox bullpen is fairly deep with Matt Thornton (currently away from team with wife giving birth), Tony Pena (recently acquired from Arizona, but getting smoked in Chi-town) and Scott Linebrink.

After Dotel, I would think Linebrink would get the next crack at the job since Pena hasn’t set the world on fire since his trade from Arizona and Thornton fills the situational lefty role just fine.

For those of you holding out hope that someday Joel Zumaya will be the next monster closer – just forget it. The guy has never stayed healthy and from the looks of it, never will. Some injury is always popping up to derail his once-promising career, and this latest one could possibly keep him out the rest of the season. Zumaya is what he is — a tantalizing talent that will only tease. In the meantime, Fernando Rodney keeps plugging along. He’s not a top of the line closer by any means and if you’re looking at options beyond this year, I wouldn’t invest heavily in Rodney. But he’s solid enough right now (pitching particularly well lately after a shaky June) and will help you this year.

The Mariners are in sell mode and that could mean some changes in the Seattle pen. While I don’t expect David Aardsma to go anywhere, guys like Mark Lowe and Sean White (Minnesota is interested him) might get dealt to some bullpen-needy teams. While on the surface that doesn’t seem to amount to a hill of beans in Fantasy terms, the fact is, that if bridge between the starters and Aardsma gets weaker, there could be a lot fewer save opportunities in Seattle because of lack of quality guys in the middle. Just keep that in mind.

J.P. Howell continues to build on his breakout season. Only twice all year has he given up more than one earned run in a game and he’s now over double digits in saves after posting just three in his career prior to this season. It’s safe to assume that he’s the man in Tampa. Like I mentioned with Rodney in Detroit, don’t go out and get Howell and expect him to be the closer for the next five to 10 years. Hell, I wouldn’t expect him to make it to next season as the closer, but for now enjoy the ride – it won’t last. Meanwhile, Randy Choate, who has four saves, has hit a rough patch lately. Often called on to get one out, Choate has failed to do just that on six occasions in July. While he hasn’t taken a loss or anything, his ERA has climbed steadily and he’s clearly failing to get the job done.

The frustrating Frank Francisco saga continues and he hit the DL for the third time this season. If I were in charge of things in Texas, I would quit jerking C.J. Wilson around and just name him closer for the rest of the season. Francisco’s injuries are taking their toll. In his last go around, he wasn’t the dominant pitcher who started the season. And now, down with pneumonia, it may take a while for Francisco to build his strength back to where it needs to be.

Wilson just continues to plug away. He’s done nothing to lose the closer job this year, it’s just been a case of Francisco being a better pitcher. I think those days are gone for the rest of the season. If I were a betting man, I’d put my money on Wilson. Fool me once, shame on you. Fool me twice shame on me. There won’t be a third time, Frank.

Scott Downs hasn’t looked like the same pitcher since he was activated from the DL. He’s been smacked around in four of his last five appearances, taking two losses and suffering a pair of blown saves. Maybe he just needs to get his groove back or maybe he’s still not right. Manager Cito Gaston has said he’s sticking with Downs. The only place you should stick Downs is on your bench and back him up with either Jason Frasor or Jeremy Accardo if he’s still out there in your league. Accardo wasn’t brilliant when he took over for Downs earlier this year, but as long as he’s not worse than what Downs is now, he’ll get a look.

By Todd Habiger
This entry was posted on Wednesday, July 29th, 2009 at 2:42 pm and is filed under BASEBALL, Saving Grace, Todd Habiger. You can follow any responses to this entry through the RSS 2.0 feed. You can skip to the end and leave a response. Pinging is currently not allowed.