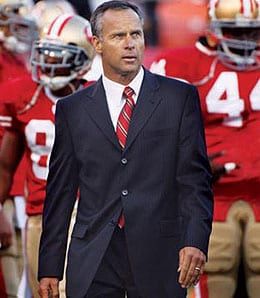 We’re back with more of the 2009 RotoRob NFL Draft Kit with yet another team preview (we’re on the home stretch now, with just five teams to go). We’re going to try to shoot out all these team previews and then start releasing the kit’s other goodies (cheat sheets, sleepers/busts lists, etc.). Before we figure out if the San Francisco 49ers can snap their skid of six straight losing seasons, let’s try to get a mental picture of Plaxico Burress in an orange jumpsuit, because the DA in charge of his case is hellbent that Burress will do some time.

Humour me for a moment. Go back in your mind to the days of science class when you had to listen to the sounds of a seashell. It had a hollow noise and reminded one of emptiness. That is a comparable feeling when trying to find something the ‘Niners did correctly in 2008. The team took a slight leap on defense by the season’s conclusion; holding opponents to 16 points or fewer in four of the its final five games. Amazingly, San Francisco scratched out seven wins despite firing Mike Nolan and replacing him with the stern Mike Singletary. By season’s end, Singletary’s press conferences were arguably the highlight of an otherwise disappointing season.

San Francisco’s offense failed to move the ball consistently. Yet again, the team struggled to find consistent quarterback play and star running back Frank Gore wasn’t able to spring many big plays for an offense that ranked 23rd in the league and 27th on the ground. With the running game lagging and the quarterbacks combining for 21 touchdowns against 18 interceptions, the receiving corps did not contribute big plays to the offense. No receiver topped the 1,000-yard barrier, with veteran Isaac Bruce leading the way with 835 yards.

The 49ers desperately needed to fix their offense, which has been routinely awful for nearly six years. Brandon Jones joins the team after four seasons with the Tennessee Titans. San Francisco also addressed its offensive line needs by bringing in former Steeler Marvel Smith and re-signing tackle Joe Staleyto a multi-year deal.

Offense, offense, offense. The ‘Niners selected an offensive player with four of their first five picks. They added speed demon Michael Crabtree to the receivers group with the 10th overall pick and then nabbed Glen Coffee to serve as a backup to Gore. While Coffee might not be an immediate impact player, Crabtree is a different story. Slim pickings abound for the ‘Niners at receiver; Crabtree must give them something in his initial campaign. Considering the state of San Francisco quarterbacks, fifth-round pick Nate Davis is a name to keep an eye on long term.

The 49ers flirted with Kurt Warner in the offseason, but once he went back to Arizona, the team was left with Shaun Hill and Alex Smith as the primary contenders for the starting job. Last season, J.T. O’Sullivan began the year as the starter but was ineffective. The scrappy Hill was better, tossing 13 touchdowns in eight starts; and then there is Smith. The 49ers have most of their position battles resolved as training camp approaches, but Smith is out to make sure he can turn the battle in his favour. Last September, he broke a bone in his shoulder and subsequently landed on IR. However, he has received positive reviews for his preparation for 2009 during the offseason. When considering what to do with this dilemma, follow the old John Madden axiom, “When you have two quarterbacks, you have none.”

Three years ago, Gore posted over 1,600 yards rushing, but over the past two seasons the former Miami Hurricane barely eclipsed 1,000 yards. Playing on a bad one-dimensional team continues to hurt Gore’s Fantasy value. However, he remains in that second tier of backs toward the beginning to middle part of the second round. Fullback Moran Norris returns to the team, which could be important for the running game since he was the lead blocker during Gore’s best season. The rookie Coffee and veteran Michael Robinson will provide depth and see their fair share of action, stealing touchdowns in the process.

Today’s NFL features bad tackling and average pass defense. Thus, it’s extremely alarming that none of the 49er receivers broke the 1,000-yard mark in 2008. Crabtree, Bruce, Josh Morgan and Jones could pose a respectable group, but much will hinge on who is throwing them the ball. As for Crabtree, rookie receivers typically don’t typically burst onto the scene. The only two players of recent vintage who did were Randy Moss and Anquan Boldin; in my opinion, he’s not in their class. If you grab Crabtree in a draft and get within shouting distance of DeSean Jackson numbers (62 receptions, 912 yards, two TDs) for his rookie campaign, take it and like it. Otherwise, this group is a grab bag. Keep an eye on Morgan, Jason Hill and the veteran Jones, who might give the group a shot in the arm. The ancient Bruce is a waiver wire fill-in at this point.

Vernon Davis’ 2008 season will likely be remembered for setting off Singletary’s epic post-game presser following a drubbing from Seattle instead of any on the field production. The fourth-year player has not developed into the weapon San Francisco thought it drafted. He averaged fewer than two receptions per game in ’08 which isn’t what the 49ers had in mind when they used the sixth overall pick in the ’06 Draft. Until Davis does it on the field, he is a back-up tight end on Fantasy rosters. Backup Delanie Walker isn’t much to write home about either.

Take 30 seconds and try to figure out who led the ‘Niners in sacks last season. Defensive end Justin Smith? Nope, he came close with seven. How about former first-round pick Manny Lawson? Wrong again, just three. If you guessed outside linebacker Parys Haralson with eight, you’re a winner! He is a part of an active and very productive linebacking troupe. Patrick Willis is a tackling machine, leading the team in tackles during his first two seasons. The downside to the 49er defense is they don’t make big plays, finishing 28th in the league in forcing turnovers. Consider them a middle of the road group.

By Derek Jones
This entry was posted on Monday, July 27th, 2009 at 12:20 pm and is filed under 2009 RotoRob NFL Draft Kit, Derek Jones, FOOTBALL, Team report. You can follow any responses to this entry through the RSS 2.0 feed. You can leave a response, or trackback from your own site.