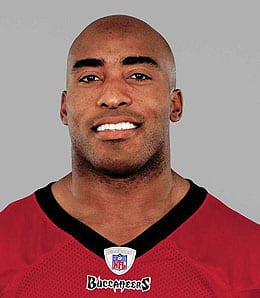 Ronde Barber will again be the key playmaker for the Buc D.

We’re back with more of the 2009 RotoRob NFL Draft Kit with yet another team preview (we’re on the home stretch now, with just a half a dozen teams left). We’re going to try to shoot out all these team previews and then start releasing the kit’s other goodies (cheat sheets, sleepers/busts lists, etc.). Today also marks the first column from our newest writer, Matt Wilson. Help me welcome Matt to the site; he’ll be contributing baseball and football content.

Before we figure out what the Tampa Bay Buccaneers have actually kept from last year’s 9-7 team, one must wonder what the hell Michael Vick was thinking visiting a strip club on the night he’s released from house arrest.

The Buccaneers did not win the division like they did in 2007, but they did have a winning record at 9-7. Antonio Bryant was the biggest bright spot on the roster. In points-per-reception leagues, Bryant was the No. 9 rated receiver in the game. In fact, 83 receptions, 1,248 yards, and seven touchdowns gave Bryant better numbers across the board than Reggie Wayne. With Bryant proving to be a viable No. 1 receiver, Jeff Garcia was a viable Fantasy quarterback in the right matchup. The Buccaneers actually averaged more passing yards per game than the New England Patriots last season. On the other side of the ball, the Buccaneer defense, led by playmaker Ronde Barber, was one of the top 10 units in the league. While this was not the same Buc defense that carried a team with Brad Johnson at quarterback in 2003, they did rank third in the NFL in interceptions.

The emergence of Bryant stemmed from the disappointment of oft-injured wideout, Joey Galloway. Galloway had averaged over 1,000 yards per season over the previous three years for the Bucs, but managed a measly 13 receptions for 138 yards in an injury-riddled campaign. Earnest Graham joined Galloway as a disappointment due to injury. After a hot start that included at least 90 yards rushing in three of his first four starts, Graham started to get beat up and split time with Tampa favourite Warrick Dunn. The workload took its toll on Graham, as he did not dress for the final six games of the season. While the defense was a bright spot during much of the season, they were also a disaster when it mattered to Fantasy owners. The Buc defense allowed 38 points in Week 14 and 41 points in Week 16. For Fantasy owners expecting solid defense in their playoff matchups, the Bucs were a major letdown.

This offseason has provided Tampa Bay with a new look to its team. While it did not get new uniforms, that is just about the only thing that did not change in Tampa. Jon Gruden was fired and defensive mastermind Monte Kiffin fled to be the defensive coordinator for his son at the University of Tennessee. The philosophy for the Buccaneers should not change too much with the appointment of Raheem Morris as the new head coach. Morris worked as the defensive backs coach in Tampa for the past two seasons under Kiffin, so there should be a sense of continuity.

As far as the player personnel goes, there has also been widespread changes. Garcia and Brian Griese are out, while Byron Leftwich has been signed to compete with Luke McCown for the starting quarterback position. In an effort to bolster the run game, Derrick Ward, who ran for 1,000 yards as a “back-up” for the Giants last year, has been signed to replace the departed Dunn. The Buccaneers have also acquired one of the most talented tight ends in the league in Kellen Winslow. He replaces Alex Smith, who was traded to the Patriots. On the defensive side of the ball, the Bucs have cut ties with Tampa legend Derrick Brooks and fellow linebacker Cato June.

Tampa hopes to resolve its revolving door quarterback issue with the selection of Josh Freeman out of Kansas State. Freeman, the 17th pick in the draft, reminds some scouts of JaMarcus Russell. He has a powerful arm and possesses great size for the position (6’5”, 248). The big question is whether Freeman will get his chance to shine this season. Wide receiver Sammie Stroughter was the only other skill-position player selected by the Bucs in April. Typically, seventh-round selections do not appear on the Fantasy radar, but the Buccaneers lack a true No. 2 receiver next to Bryant, so it’s worth keeping an eye on Stroughter.

If the season were to start today, McCown would be the starting quarterback. The Buccaneers cannot be all that comfortable with that idea since they went out and signed Leftwich. Just two weeks after signing Leftwich, the Bucs drafted Freeman in the first round. Freeman possesses the most upside of these three quarterbacks long term, but the Buccaneers are not going to be a passing team. Offensive coordinator Jeff Jagodzinski has already stated that he plans to put together a run-heavy scheme for the Bucs. Jagodzinski coached Matt Ryan at Boston College, so he should have a good idea of how the two compare developmentally. Freeman will not start this year unless the coaching staff really feels he’s ready. None of these quarterbacks should be relied on for Fantasy purposes except in the deepest of leagues.

Graham might be the incumbent, but the Bucs did not sign Ward to sit on the bench. Ward is slightly bigger than Graham, so Ward may pick up some extra carries in the red zone (he scored just two touchdowns on the ground last year…mostly because of Brandon Jacobs). For a running back, Ward has a good set of hands and that makes him even more valuable in PPR leagues. In a role where he split time, Ward had 41 receptions last year. Look for that number to increase to 50-to-60 receptions this year. The third back in Tampa is Cadillac Williams. He is a feel-good story, as some doctors expected him to never play football again, but he may open the 2009 on the PUP-list again. He’s nothing more than a mid-season waiver wire claim at best.

Bryant finally put it all together last season. In standard scoring, he outperformed Wayne, Terrell Owens, Randy Moss and Brandon Marshall to name just a few. Unfortunately for Bryant, the system is becoming run heavy this season. Wide receivers are historically full of hot air and Bryant is no exception to this rule. That’s why it should be particularly alarming when he is the first to admit that he expects his stats to slip in 2009. All that said, he will still be the No. 1 receiver in Tampa, if only because the alternatives are weak. Michael Clayton has never regained his form from his rookie season. Maurice Stovall, Dexter Jackson and Stroughter were all talented college receivers. Pay attention in training camp to see who will start opposite Bryant; odds are the winner will be a bye-week spot starter at best.

With the transition to a young and/or less talented quarterback comes the need for a safety valve for him to check down to for an easy completion. Tampa went out and acquired one of the best tight ends in the league in Winslow. He has had a history of being injury prone, but many of the injuries are rather fluky (e.g., motorcycle accident, staph infection). When he is healthy, Winslow is capable of being the top performing tight end in football. He will act as the true No. 2 receiver in this offense and should be one of the first tight ends off the board.

As the team that pioneered the Cover 2 defense, this unit has always been good at producing turnovers. The pass rush, on the other hand, has been very weak since Warren Sapp left the team. Brooks is gone, but Barrett Ruud and Barber are still on the roster. If the run game plays well, it will keep the defense off the field for extended periods of time. This Buc team plans to win games 13-10, if at all, so the Buccaneers D/ST should be a safe addition after the top units are off the board. As for their kicker, this is always a crapshoot anyway, but it is worth noting that Matt Bryant was fourth in the league in field goals last year. On the downside, he did not hit one longer than 50 yards. If the quarterback play is inept but the defense is excelling, Bryant could be the beneficiary of good field position and hit a few extra field goals.