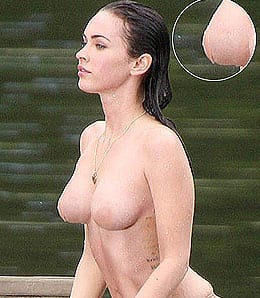 Is drafting Brandon Marshall akin to trying your luck with Megan Fox and her skimpy nipple coverings?

To win it all, you have to risk it all. Nobody ever achieved greatness by playing it safe. These theories hold true in just about every walk of life, but they are especially pertinent in the world of Fantasy sports. No matter how knowledgeable you are about a particular sport, you will always need a little luck to truly get over the top. All that you can do is put yourself in a position to actually get lucky. Think about the guy who stays out at the bar until last call, talking to girls that are way out of his league. Sure, there are safer moves than trying to pick up a Megan Fox clone, but the risk/reward of the conversation is worth the gamble.

Keeping this theory in mind, I am here to personally implore you to take a look at Brandon Marshall in your upcoming Fantasy draft. Your natural response to this idea should be to assume that I am crazy. That’s fine. I am aware that I am crazy; insanity allows me to think outside the box. After Marshall’s antics in practice, many Fantasy owners are using the “avoid at all costs” way of thinking. It certainly is understandable because Marshall does not have a track record that would lead you to believe a change of attitude is on the horizon. The trick is trying to understand what is going through Marshall’s head right now, which is no easy task.

Personally, I believe that this pre-season suspension is the best thing that could have happened for Marshall owners. Previously, he was injured, caught up in a judicial case and desperate for a big payday. Like any person, he was distracted by all this extracurricular activity and it really started to jade him. None of this even takes into account the fact that Marshall had lost his star quarterback and is being forced to learn a new offense.

The cynic in all of us says “He is being paid plenty of money to play a game; he needs to just shut up and play.” I am on the same page with everyone making that argument. Realistically, it all had to come to a head at some point and the Broncos are fortunate that it happened in the preseason. If it had not, Marshall owners would be waiting for the other shoe to drop all season long. He was on a collision course with Josh McDaniels and finding some sort of resolution sooner rather than later is ideal.

Look at it this way: it cannot get any worse.

I took a semester of Intro to Psychology in school, so I am obviously somewhat qualified to look into the way that this guy is thinking. With all of the mounting frustration in his life, Marshall lost his sanity and decided to put on one of the worst practice displays in history. I am not arguing that he was right to act like Veruca Salt in pads, but if you take away the fact that he is a professional athlete, you probably know somebody like Marshall. He expected to get everything he wanted immediately.

The driving force behind all this lunacy is money; it’s just simple greed. For as long as Marshall is suspended, not only will he hurt his chances of signing a lucrative contract for next season, he will also lose out on money this season. While he will hardly miss $2,000 for his pre-season suspension, he would lose over $100,000 per regular season game that he misses. All that this suspension really amounts to is his coach, McDaniels, making a stand against rebellion within the organization. Jay Cutler threw a fit and he got exactly what he wanted; why wouldn’t Marshall try the same thing?

McDaniels’ problem is that he set a precedent for acquiescing demands from his players and now he is trying to right that mistake. Marshall gambled that his temper tantrum would result in the Broncos giving in once again, but it turned out to be a horrible miscalculation.

The night after his foolishness in practice, Marshall told ESPN’s Trey Wingo that he acted out in frustration and just wanted a fresh start with the Broncos. Maybe I am just extremely gullible, but I believe that he will not be a problem again this season. Members of the media might tell you differently when Marshall is reinstated to the Bronco roster, but this guy needs to play. There is no chance in hell he gets his payday if he is unwilling to play under his current contract.

As it is, the lucrative contract Marshall expects is a long shot at best. If Marshall expects to be paid like the star wide receiver that he is, he will have to drop all the baggage like Randy Moss did in New England, and show that he can become a team player. NFL owners have no problem paying for talent (Michael Vick got a contract less than a month after he was officially released from prison), so Marshall has not destroyed his chances of getting the Greg Jennings’-like contract he desires.

If there is just one person (just one) advising him that has any semblance of how the NFL works, Marshall will shut up and get back on the field.

Some Fantasy owners are acting like it is the end of the world that Marshall is missing the preseason. He’s actually getting a vacation, a chance to clear his head, and time to work out on his own schedule. For anyone that has ever seen Marshall, you know that his body is clearly his temple and he will not be sitting and watching television for these two weeks. By the time the preseason is over, he’ll be itching to get back on the field and should become a sponge with the new system.

I do not begin to presume that he will be a key factor in Week One, but remember that he did not even play last year in Week One and still ended up with over 100 receptions. Kyle Orton is not Cutler, but he’s also not as horrible as some people make him out to be. Last year, Marshall was targeted over 170 times and he caught just over 100 of those passes. That means about 40 per cent of the throws towards him resulted in incomplete passes.

No matter what you think of Orton, even he can get the ball to Marshall half the time. You should not expect 100 receptions again, nor should you expect 170 targets, but you cannot expect those numbers from any receiver that is available in the fifth round, where Marshall has been going since his suspension.

The beauty of acquiring Marshall is his No. 1 wide receiver upside. By the time you draft him, you will likely already have your stud receiver and possibly even your No. 2 receiver. If you only use two active receivers in your league, he makes for a phenomenal flex player. If he bottoms out, you will hopefully have struck gold with a later draft pick or a waiver wire all-star.

It’s easy to throw these theories at you, but it all means nothing if you don’t see proof that I have faith in the theory. My proof comes from the RotoRob Regulars league. One of the owners in the league had a real life (whatever that is) conflict with the draft time, so he was “stuck” with Marshall. When he expressed his displeasure at acquiring the malcontent, I jumped on the opportunity to bring him into the fold. With Anquan Boldin as my No. 1 and Chad Johnson (I am bothered by the whole Ochocinco thing) as my No. 2, Marshall represents a guy that I would use in my flex.

In order to obtain Marshall, I traded the very capable Lee Evans. Evans is about the same age as Marshall, has elite speed, and will benefit from more single-coverage with Terrell Owens playing on the opposite side. He’s a nice player, but we kind of know who he is at this point. With Evans having Trent Edwards at quarterback and a sieve for an offensive line, the upside of Marshall outweighs him in my eyes.

In spite of my faith in Marshall, there are plenty of signs that indicate he just “doesn’t get it.” Rumour has it that in high school he quit on his basketball team, much like he quit on the Broncos in practice last week. This type of character issues scared away more prestigious college football programs and landed Marshall at the lesser known University of Central Florida for his collegiate experience. After proving to be a man among boys in college, he still was unable to convince teams that he was worth a first round pick.

Marshall clearly possesses first-round talent and is one of the most physically gifted wide receivers in football today. If a team were willing to give Denver a third round pick today, they could probably acquire this No. 1 receiver, but the baggage remains too heavy for most teams. Marshall is a certifiable game changer, yet his attitude has caused him to become nothing more than an enigma.

Since history tends to repeat itself, it’s no wonder that general managers are not interested in making the gamble. However, the difference between a general manager and a Fantasy owner is quite significant. You’re playing to win this year, but if you fall short, you’ll be able to draft again next season. A general manager would have to tie his job to Marshall, and if it does not work out he could very well find himself unemployed. But if you’re truly looking to win a simple Fantasy league, Marshall’s talent versus his average draft position offers tremendous upside.

So sit down at that bar and take your chances with Megan Fox. You just might get lucky.

Brown is a toolsy outfielder who has the potential to be a 20/20 guy.

The Marlins roster is filled with prospects every year. The minute a guy turns 27 on this roster, they immediately get shipped out for another influx of prospects.

When your team is 17 games back in the division and half your roster is on the disabled list, it is a great opportunity to see if any of your farm system is ready to play in the show. You know things are going bad when you have players on the disabled list with valley fever.

Let’s review how some of the big prospects around the Junior Circuit have fared this season and who might be coming up next month that’s worthy of monitoring.