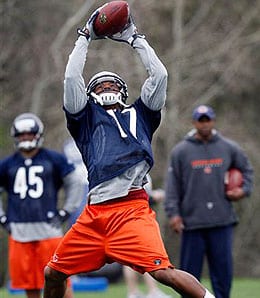 How does Juaquin Iglesias stack up against some of the other rookie receivers?

Do you think Juaquin Iglesias is worth a look at pick 176 in a dynasty draft? The best remaining rookie wide outs include Mohammed Massaquoi, Ramses Barden, Brandon Tate and Jarett Dilliard, and Jordy Nelson is getting heavy consideration from me. Nate Washington, Lee Higgins and Sidney Rice are left as well. Let me know via e-mail if you get this…thanks.

Here are my thoughts on your options…

Iglesias — All the buzz has centred on Johnny Knox, though things are wide open there, which is good. I’m not sold, though.

Massaquoi — Browns have no one outside of Braylon Edwards, but I think Brian Robiskie gets that job. Meh.

Dillard – David Garrard does nothing for me and Jacksonville doesn’t have much of a track record with WRs not named Jimmy Smith.

Nelson – He’s very interesting to me. Donald Driver is 34, and Nelson is the kind of tough possession receiver that excels in a West Coast offense. He’s a pick for 2010, but if you’re in a point-per-reception league I’d consider it even more strongly.

Higgins – He finished strong and has the most chemistry with JaMarcus Russell outside of Zach Miller. You could do worse.

Washington – He’s a third banana trying to be a first or second banana on a team that likes to run and rarely stretches the field, which is his strength. Move along.

Rice – I’m not sure what to make of him. He makes some spectacular plays, and should get a better effort from the QB position this year, but he’s also a little girl, which is a problem. To me he’s the top risk/reward guy of the eight you listed in that he could blow up with Brett Favre (assuming he does come to Minny) or just blow up when a DB bumps him and his knee shatters.

That’s all I got. Good luck.

By Herija Green
This entry was posted on Saturday, July 25th, 2009 at 12:11 pm and is filed under Dear RotoRob, FOOTBALL, Herija Green. You can follow any responses to this entry through the RSS 2.0 feed. You can leave a response, or trackback from your own site.