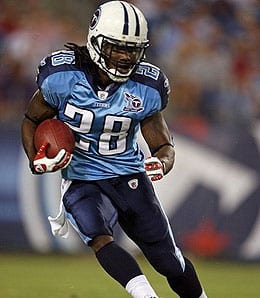 Alex targeted Chris Johnson with his first rounder and got his man.

As part of the 2009 RotoRob NFL Draft Kit, we wanted to present you with the results of the 2009 Fantasy Football Expert Mock Draft No. 3, hosted by the folks at MockDraftCentral.com on Tuesday. I represented RotoRob.com in this mock draft and I picked seventh overall. The expert panel consists of 12 guys representing various media outlets, including Mock Draft Central, KFFL, Fantasy Pros 911, Roto Experts, Sports Illustrated and Time Warner. The 15-round draft included the following starting positions: QB, RB, RB, WR, WR, WR, TE, FLEX, DEF, K. This is a non-PPR mock with QB touchdowns worth four points, one point for every 20 pass yards, one point for every 10 rushing or receiving yards, and six points for a rush or receiving touchdown.

5:08 p.m.: Just starting to do some pre-mock preparations when I notice that the guy picking 10th, Scott Swanay, has an Applied Math & Computer Science degree from Harvard. I expect him to fool us all with his mathematical trickery.

5:14 p.m.: When I prepare for a draft, I like to take a look at my position and try to get a feel for what options I am going to have for the first five rounds. I will be picking sevent, 18th, 31st, 42nd, and 55th overall. My first five rounds could look like this: Chris Johnson, RB, Tennessee Titans; Randy Moss, WR, New England Patriots (I almost wrote Vikings; apparently, I am stuck in 2003); Jonathan Stewart, RB, Carolina Panthers; Braylon Edwards, WR, Cleveland Browns. I am not sure how much I would love this draft, but I do love me some young and energetic running backs. The draft is scheduled for 8:00 p.m.

5:26 p.m.: Taking a closer look at the first round pick, I will most likely have to choose from the following: Steven Jackson (RB, St. Louis Rams), Johnson (RB, Titans) and DeAngelo Williams (RB, Panthers). Under this scenario, I think I would lean towards Johnson. I love his game, but he could be overvalued this early.

5:29 p.m.: As far as quarterbacks go, my strategy most likely will be to wait until late and grab two starting QBs with the potential for breakout years and have the ability to pick based on matchups throughout the year. I think once you get past Tom Brady, Drew Brees and Peyton Manning, there is not a huge difference between someone you can steal late. My plan is to get these two guys in the late rounds: Trent Edwards (QB, Buffalo Bills) and Jason Campbell (QB, Washington Redskins). I would take a look at Carson Palmer if the price was right.

6:08 p.m.: Looking at the top 20 rankings from a bunch of different sites, it is amazing to me that Steve Slaton was taken so late in the actual NFL Draft last year. He is arguable the ninth or 10th best Fantasy running back coming into this year, which is exactly how many running backs went before him in last year’s draft.

6:13 p.m.: I think Jackson and LaDainain Tomlinson will bounce back with amazing years, if healthy.

6:15 p.m.: This year’s rookie running backs to watch include Knowshon Moreno, Donald Brown, LeSean McCoy, and Chris “Beanie” Wells. This group probably won’t best the 2008 class of Matt Forte, Stewart, Johnson and Slaton, but it will be interesting to see how their situations play out. I think Wells could easily beat out Tim Hightower and be the starter from Week One in Arizona. Brown is an amazing runner and will push Joseph Addai for playing time. McCoy could see a ton of action if Brian Westbrook keeps getting hurt. Moreno is a stud, but Josh McDaniels likes to have a stable of running backs and use them all.

6:21 p.m.: Note to all Willie Parker fans and owners: Rashard Mendenhall is awesome and, if healthy, will leave Parker with fewer carries.

6:23 p.m.: My pre-season vote for NFC Rookie of the Year goes to Michael Crabtree of the 49ers. In the AFC, I have Brown of the Colts. The stat that typically gives the best idea of whether a receiver will translate to the next level: receiving touchdowns in college. Crabtree had 41 in two years at Texas Tech.

6:31 p.m.: My sleeper of the year is Earl Bennett, WR, Chicago Bears. Bennett was a teammate of Jay Cutler during their Vanderbilt days, so Cutler trusts him. Plus, the Bears have a lack of depth at WR, so Bennett is sure to see the field a ton. Think Eddie Royal-type performances.

7:00 p.m.: My main target for TE is Greg Olsen of the Chicago Bears. Cutler loves using his TE and Olsen is actually the best target they have. I am ready to have my annual “laugh at the guy who takes Tony Gonzalez way too early” moment. This is an expert’s draft though…I might have to wait until August.

7:15 p.m.: 45 minutes until go time. I fully expect Adrian Peterson to go No. 1, but after that it could get interesting. This is not like other years where there is basically no guesswork in the top three. I think Maurice Jones-Drew could see a huge spike in production with Fred Taylor heading north to New England.

7:25 p.m.: I am convinced that I am going to go RB in the first round and then WR in second round. Wow, I absolutely hate picking between fifth and eighth in a 12-team league.

7:53 p.m.: After some technical SNAFUs I am in the draft room and ready to rock it!

Round One: No real surprises here except Jackson fell all the way to 11, about four to six spots farther than he really should land. I end up taking Johnson with the No. 7 pick. Late in the first round, Moss and Andre Johnson go off the board. I think Slaton going No. 10 is a little high.

Round Two: Wide receivers dominate the deuce by filling seven draft spots. The biggest surprise here for me is Brees going 13th overall. I think that you will overpay for him this year and if you want a top tier QB, it may be best to wait another couple rounds and snag someone like Aaron Rodgers, who may even give Brees a run for his money. I took WR Steve Smith (Panthers) in the second round — a player I usually shy away from because of candy-armed Jake Delhomme.

Round Three: After taking a RB and WR, I was planning on taking another wide out in this round until I saw Brady was still on the board. I am a huge advocate of waiting on QBs for the later rounds, but I just think Brady is worth more than a mid-third round pick. I ended up taking him and passing on a running back such as Pierre Thomas, Thomas Jones, Darren McFadden, or Marshawn Lynch, all of whom went in this round after my pick.

Round Four: Going into this round, I had three guys on my list to take with this pick. Since I needed a running back they were, in order, Larry Johnson, Moreno and Stewart. All three were available and I took LJ, banking on him staying injury free and happy. The first rookie went off the board this round when Moreno was drafted with the 10th pick. So after four rounds, my roster looks like such: QB Brady, RB Chris Johnson, RB Larry Johnson, WR Smith. I think that is a fairly explosive squad thus far.

Round Five: Just like last round, I had running back on the mind. I wanted to take either Stewart or the rookie Brown. Stewart gets picked third, leaving me to see what Brown can do for me. Many would question this move, but I think Addai will be phased out and the Colts did not spend a first-round pick for the guy to ride the pine. I love having Brown as my third running back.

Round Six: Nothing too crazy here. I drafted Santonio Holmes to shore up my receiving corps. It was a tough decision between Holmes and second-year guy Donnie Avery. I like the fact Avery plays on turf at least eight times a year, but I think Holmes will put up better numbers. Lee Evans, my target pick for this round, was snagged a couple slots ahead of me.

Round Seven: Instead of filling my starting positions, I took a fourth running back here in Felix Jones. This second-year guy is super talented and will get every opportunity to get as many touches he can handle. I like the depth my squad has and Jones is a wildcard who could pay off greatly. I did not see any WR that I had to have in this round, so I will wait to fill the starting WR and TE spots I have left.

Round Eight: Needing a TE, I selected Olsen of the Bears. I believe he is the best option for Cutler and he will use him to the fullest. I really think Olsen will have a Pro Bowl year and put up numbers comparable to new Falcon TE Gonzalez. Call me crazy. FYI: Crabtree was selected late in this round. He may be a better option in keeper leagues, but we’ll see.

Round Nine: I go WR and take Jeremy Maclin, a rookie for the Eagles, who will surely see the field a lot this year. The Eagles love to pass and Maclin gives them another option. The first defense (Pittsburgh) goes off the board with the next pick.

Round 10: I like what I have so far. I added another rookie wide receiver when I take Hakeem Nicks of the Giants. I think he will try to replace Plaxico Burress in that offense. I saw Nicks play a lot in college and I think he has what it takes. My hope would be that either Maclin and Nicks step up and play a prominent role in their respective offense.

I would like to thank the guys at Mock Draft Central for putting on the mock draft; I had a blast. Here is a link to the results.

By Alex Hardin
Tags: 2009 NFL Draft Kit
This entry was posted on Thursday, July 23rd, 2009 at 12:00 pm and is filed under 2009 RotoRob NFL Draft Kit, Alex Hardin, FOOTBALL, Mock drafts. You can follow any responses to this entry through the RSS 2.0 feed. Both comments and pings are currently closed.