The Wire Troll: The Return of Mr. Mota 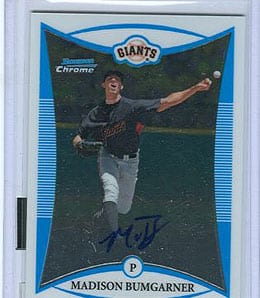 The way Madison Bumgarner is handling Double-A suggests the majors can’t be far away for this young phenom.

It is that time of the year again, with the mid-season classic just around the corner, and the Futures Game, Home Run Derby and the game itself are events that should not be missed. Enjoy the festivities, but don’t relax too much as we are entering a very volatile period of time in baseball with the trading deadline fast approaching. The contenders and pretenders over the next several weeks will be sorting themselves out and making the required moves to shore up their weaknesses heading into the stretch run. One doesn’t want to be caught off guard from a Fantasy perspective as it can certainly either make or break one’s chances to claim victory.

Without further ado let’s take a look at this weeks recommendations.

Madison Bumgarner, SP, San Francisco Giants: The Giants are in the process of building one of the finest starting rotations in the game, and the next piece to that puzzle was recently promoted to Double-A Connecticut. Bumgarner, a 19-year-old phenom, has made the move without skipping a beat. Since the promotion he has a stellar 1.74 ERA and 45 strikeouts in 57 IP. That’s not too shabby for a kid that doesn’t turn 20 until August 1 of this year. He should be rostered in all keeper formats and a guy that everyone should be watching for down the road.

Guillermo Mota, RP, Los Angeles Dodgers: Jonathan Broxton is hurting with a toe injury and it appears that the cortisone injection he got back in mid-June has not gotten the job done. This explains the five earned runs Broxton has allowed in his past two outings. Joe Torre has given the All-Star the weekend off and Mota has temporarily been handed the job of closer for the Dodgers. Mota has been on a roll and toe injuries can be notoriously slow to heal, so an investment in Mota is a solid move in all formats for those Fantasy squads in search of saves.

Drew Stubbs, OF, Cincinnati Reds: The injury to Jay Bruce Saturday is being reported as a fractured right wrist, but we are still waiting for a timeline as to how long he’ll be missing from the lineup. The Reds have already announced that Stubbs would be the first guy they look at to replace Bruce in the lineup. Can you imagine an outfield consisting of Chris Dickerson, Willy Taveras, and Drew Stubbs? Not a lot of power potential out of that lot. Stubbs has managed 33 stolen bases at Triple-A Louisville with very little in the way of power. Jonny Gomes, who has stepped up his game recently, could also figure into the mix for increased playing time. If you’re looking at gambling in the stolen base category, Stubbs should be rostered awaiting, of course, further news on the Bruce situation.

John Grabow, RP, Pittsburgh Pirates: Matt Capps turned a non-save situation into a loss Saturday with one of the ugliest outings of his career. He allowed six hits, two walks, and was charged with five earned runs in one-third of an inning. Capps has already suffered through minor discomfort in his right elbow this season and missed some time at the end of May while missing seven weeks with bursitis and internal rotational deficit last summer. It appears that a trend has developed and Grabow is next in line for saves for the Pirates and a solid addition in all formats.

Kyle Lohse, SP, St. Louis Cardinals: Lohse has been sidelined since June 3 with a forearm strain and is scheduled to return to the rotation Sunday against the Cubs. In his last rehab start Tuesday for Triple-A Memphis, he tossed six innings of two-hit ball, allowing no runs with six strikeouts. Lohse is pitching for a solid offensive club that will give him the opportunity to win every time he takes the hill. If he’s available in your league, now is the time to make a move.

Josh Willingham, OF, Washington Nationals: In his past 10 games, Willingham has hit three homers, driven in 10 runs, swiped two bags and, more importantly, is playing on a regular basis. The former Marlin has always had the potential to be a strong force with the stick, but with his defensive skills he is probably more suited to life in the AL as a DH. Are the Nationals showcasing Willingham as potential trade material? Elijah Dukes is at Triple-A Syracuse and Austin (lack of powers) Kearns is currently riding the pine and this should guarantee solid opportunities for both Willingham and your Fantasy squad to boost those power numbers in the immediate future.

Jose Contreras, SP, Chicago White Sox: A horrendous start to the 2009 campaign had many wondering if this might possibly be the end of the road for Contreras. He was sent to Triple-A Charlotte to get his game back on track and since being recalled at the beginning of June has pitched like the Contreras of old. In 43 2/3 IP, he has allowed only 10 earned runs and in his past three starts has an amazing 25/3 K-to-BB ratio. It is time to start believing and get him rostered in all formats.

Manny Parra, SP, Milwaukee Brewers: Those 42 walks in 64 2/3 IP pretty well tells the story for the poor start to the 2009 campaign for Parra and his subsequent demotion to Triple-A Nashville. He was recalled this past week and on Thursday, against a strong offensive club (the Cardinals), he allowed only three hits, one walk and racked up seven strikeouts with no earned runs in seven IP. It’s all about limiting the walks for Parra. The 147 strikeouts in 166 IP in 2008 had a lot of Fantasy owners anticipating a potential break-out year for the 26-year-old southpaw this season. Parra is certainly worthy of a pick up in NL-only leagues and should be on the radar in mixed formats.

Edwin Encarnacion, 3B, Cincinnati Reds: This situation caught me completely off guard. Encarnacion was sidelined for May and June with a wrist fracture and is currently available in nearly 60 per cent of the leagues playing at CBS. He returned this past week and hit a three-run homer Thursday against the Phillies. This is the same 26-year-old that hit 26 long balls in 2008. It’s worth a quick scan to see if he’s out there on your league waiver wire and, if so, make a move and get him rostered quick.

By Tim McLeod
This entry was posted on Sunday, July 12th, 2009 at 11:16 am and is filed under BASEBALL, The Wire Troll, Tim McLeod. You can follow any responses to this entry through the RSS 2.0 feed. You can skip to the end and leave a response. Pinging is currently not allowed.