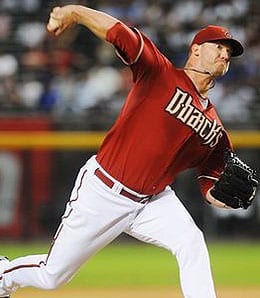 If Chad Qualls is dealt, don’t be shocked if Jon Rauch becomes valuable.

Tony Pena did not have a good June and saw his ERA jump from 1.78 to 4.36. He’s since whittled it down a bit and continues to get holds, but Chad Qualls remains the closer despite his inconsistency. Since our last NL column, Qualls suffered a loss and blew a save, but he’s come back with back-to-back saves, giving him 15 in 19 tries for the season. Pena has done nothing to entice the D-Backs to make a change and is barely worth owning in NL-only leagues now. If anything, Pena could lose his spot in the pecking order to Jon Rauch, who’s gotten better and better after a simply ugly April. Holding leads has been a problem in Arizona, and it’s important to note that Qualls is being shopped around (to the Yanks?), so if he’s dealt, look for Rauch or Pena to take over by acclimation. At this point, my money’s on Rauch.

Since our last NL column, Mike Gonzalez has given up six earned runs in six games, winning one, saving another, taking a loss in his most recent outing and earning a pair of holds. Rafael Soriano has racked up a couple saves since then, though on Friday he made things interesting, giving up two earned runs but still getting the save. Gonzalez is losing Fantasy traction, but both are still worth owning since they each continue to have excellent numbers, but note that since the beginning of June, Soriano has four saves to Gonzalez’s two. If you have to choose one at this point, take Soriano.

As Matt Lindstrom hit the DL, Leo Nunez and Dan Meyer have each recorded two saves during that time. While some sites have speculated that Nunez is the closer I don’t buy that just yet. Meyer has the better numbers (take a look; I dare you), but that’s not to say Nunez hasn’t been good; in fact, he’s been very sharp since recovering from that ankle woe. Both are solid pick ups now have been better than Lindstrom all season. Given the confidence that Freddi Gonzalez is showing in these two, Lindstrom (who is about two weeks ahead of schedule in returning from his elbow problem) may never get his old job back.

Jose Valverde has recorded five saves while blowing two others since coming off the DL after two months. He hasn’t exactly been very good this season, blowing four saves in 11 tries. Still with 40+ games in each of the past two seasons, Valverde has earned some leeway. The fact thathe looked extremely sharp Monday, striking out the side for the save, tells us that we needn’t worry at this point. LaTroy Hawkins may still get an occasional save when Valverde is unavailable, and thanks to his holds and superb numbers, even acting as Valverde’s set-up man, Hawkins is worth owning in NL-only leagues.

Jonathan Broxton’s outing on Sunday was a disaster as he failed to hold a 6-2 lead — entering in the ninth in a dreaded non-save situation. It’s only one bad outing though, as Broxton still has outstanding numbers across the board, including 20 saves — good for fourth in the NL. Don’t let one bad outing influence you — Broxton is headed to the All-Star Game for a reason. In other Dodger bullpen news, Guillermo Mota has a run of seven straight scoreless outings comprising eight innings of work. With just one earned run allowed in his last 22 innings, Mota has worked his ERA down to 3.89.

Trevor Hoffman has allowed earned runs in three of his last six games, twice giving up multiple runs. Given his age (41), that’s something to be concerned about. Hoffman has been outstanding all season long so he’s earned a long leash. Still, monitor him closely. Carlos Villanueva, meanwhile, got hammered just over a week ago, but has come back and pitched well since. He might be worth another look if he starts heating up.

In four appearances since coming of the DL, Brad Lidge has nailed down three saves, finally looking like the man who was arguably the most important Phillie last season. Since Ryan Madson failed to impress during Lidge’s time on the DL, consider Lidge pretty safe right now. Though Lidge’s overall numbers are still pretty sad, it’s looking likely that the injury that was affecting his play, and now that he’s healthy, Madson can be cut from most leagues.

After going a month without allowing an earned run, Brian Wilson got smacked around on June 27 to the tune of three earned runs to take the loss against Milwaukee. He’s been solid all year and mostly looked very sharp in June, so he should be safe, but the fact that he was burned for three hits, a walk and another two runs in a shaky save Monday against the Fish is worrisome. Righty set-up man Bobby Howry didn’t exactly look sharp in June, but LHP Jeremy Affeldt has been money, hurling 21 straight scoreless outings to emerge as one of the top set-up options in the NL.

So much for my prediction that Chris Perez was the closer of the future in St. Louis. The future was traded to Cleveland to torment Kerry Wood owners. Meanwhile Ryan Franklin is doing his best 1990 Dennis Eckersley impression (trust me, it was good). He’s among the best closers in the game right now; not bad for a dude who wasn’t even expected to keep the job all season.

Mike MacDougal has come in and stabilized the Nats’ bullpen situation (how sad is that?). Mad Mac will be an adventure each time out and usually doesn’t do himself any favours, but right now he’s pitching well and has firmly entrenched himself at the closer. He’s come a long way from the pitcher who worked his way out of the White Sox plans with his wildness. Pick him up in NL-only leagues, and consider him as a mixed league option.

By Todd Habiger
This entry was posted on Tuesday, July 7th, 2009 at 12:53 pm and is filed under BASEBALL, Saving Grace, Todd Habiger. You can follow any responses to this entry through the RSS 2.0 feed. You can skip to the end and leave a response. Pinging is currently not allowed.