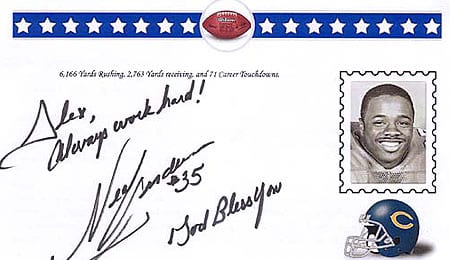 Not since Neal Anderson have Bear fans seen a performance like Matt Forte’s rookie effort.

We’ve been a bit quiet on the pigskin front this week, but we’re back with more of the 2009 RotoRob NFL Draft Kit with yet another team preview (we’re now basically two-thirds of the way through this now, with just 11 NFC teams left to tackle). We’re going to try to shoot out all these team previews and then start releasing the kit’s other goodies (cheat sheets, sleepers/busts lists, etc.). Before we wonder if the Chicago Bears can build on last season and make it back to the playoffs for the first time since 2006, let’s pass along our respects to the family of Steve McNair, the former Titan great who was buried Friday night.

The Bears stayed in the playoff hunt until the season’s final week on the strength of a pair of overtime wins in Weeks 15 and 16. Rookie Matt Forte led the offense with 1,715 total yards and a dozen touchdowns, authoring arguably the best all-around performance by a Bear back since Neal Anderson. Chicago’s passing game was efficient as Greg Olsen continued to live up to his first-round status, and Devin Hester progressed after his switch from defensive back to receiver.

Ultimately, Chicago missed the playoffs for the second straight year when it lost to the Texans in Week 17 — as it turned out, losses by Dallas and Tampa Bay left the Bears in a spot where a win in that game would’ve earned them a Wild Card bid. The once-vaunted defense struggled for the second straight season as well, including finishing 30th against the pass. The Bears were also thin at key positions as a true No. 1 receiver never emerged and their options behind Forte were ineffective, leaving him fatigued down the stretch.

After suffering through a seemingly endless parade of mediocre quarterbacks, the Bears finally pulled the trigger on a legitimate franchise signal caller when they pried a disgruntled Jay Cutler away from the Broncos. They paid a heavy price, however, dealing a pair of first-round picks along with a third-rounder and incumbent Kyle Orton. To protect Cutler, the team signed veteran Orlando Pace, who at 33 still should have some juice left in the tank. The Bears were also rumoured to have interest in free-agent receivers Plaxico Burress and Marvin Harrison, though such talk has quieted considerably.

Already without a first-round pick, the Bears traded down out of the second round and finished the draft with nine selections — two each in Rounds Three through Five. For Fantasy purposes, the names to know are wide receivers Juaquin Iglesias and Johnny Knox. Iglesias is the higher selection, but it has been Knox garnering the praise since the draft, recently drawing comparisons to former Bear Bernard Berrian. Given the lack of established talent at wideout, both rookies deserve watch list designations in deep leagues.

It’s pretty safe to say Cutler will be among the most heavily debated Fantasy performers this year. The fourth-year pro put up gaudy numbers last season (4,526 passing yards, 25 touchdowns), but he was also mistake prone (20 turnovers) and will be dealing with a less imposing assortment of weapons in the passing game…and that’s where the questions really start. Will Cutler’s arrival elevate Chicago’s existing group of receivers? Or, will that unproven group drag Cutler down? The truth probably lies somewhere in the middle, but those expecting another 4,500-yard performance from Cutler are being unrealistic. Draft him as a low-end No. 1 or very strong No. 2 Fantasy quarterback with the hope one of Chicago’s young wideouts emerges.

Forte was a revelation for Fantasy owners last season, carrying the ball 316 times for 1,238 yards while adding a team-high 63 receptions for 477 yards for a combined 379 touches, which was good for third in the NFL behind Adrian Peterson (384) and Michael Turner (382). The Bears have predictably expressed a desire to decrease Forte’s workload in his sophomore season, but given his receiving skills it’s hard to imagine that happening. If anything, look for Kevin Jones to take a few of his carries while Forte’s involvement in the passing game increases. Jones is coming off his worst season (34 carries, 109 yards), but when healthy he’s a capable backup and a worthwhile handcuff option for Forte owners. As for Forte, he should be a first-round pick in all formats and could be a top three pick in point-per-reception leagues — he’s as close to a lock for 350-plus touches as anyone in the NFL.

While Chicago’s receiving corps is certainly short on proven commodities, they’ve quietly done a nice job of stockpiling young talent in the hopes a couple of them will develop with Cutler at the helm. Hester (51 receptions, 665 yards, three TDs in ’08) is the top option, and his deep speed should be a great fit for Cutler’s ability to throw the deep ball — something that was largely M.I.A. last season. Opposite Hester in 2008 was Rashied Davis, who set career highs in receptions (35) and yards (445). Davies turns 30 before the season, however, and lacks the upside of many of the Bears’ other wideouts. Also in the mix are Iglesias, Knox and Earl Bennett. As previously noted, Knox has been opening eyes during off-season activities, but don’t overlook Bennett, who played with Cutler at Vanderbilt and has been working as a starter during the offseason. Despite that, Hester remains the only surefire Chicago receiver to draft in standard leagues as a No. 3 option with upside. Bennett should find a home as a sixth receiver in deeper versions, while Knox carries some final-round potential.

Considering the uncertainty at receiver, Olsen (54-574-5 in ’08) could emerge as Cutler’s top option, which may elevate him to the upper echelon of NFL tight ends. Veteran Desmond Clark also posts solid numbers, but Olsen clearly surpassed him last year and it’s hard to imagine that gap not expanding in 2009. Consider Olsen a mid-range No. 1 option.

Talk about overrated. The “Monsters of the Midway” finished 21st in total defense (16th in scoring) and managed 28 sacks, leaving takeaways (32 – second in the NFL) as their only legitimate contribution to Fantasy owners. Chicago’s special teams were also mediocre, accounting for only one return touchdown. This is a group I could see pulling the trigger on in the final round if you’re one of the last few owners to select a defense, but don’t hesitate to cut them loose if they’re underperforming…of course, on the flip side, if they go undrafted and start playing back to pre-2007 form, scoop them up immediately.