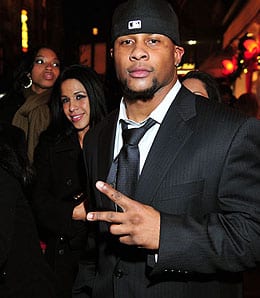 With Derrick Ward taking his HCWDB-worthy act to Tampa Bay, Brandon Jacobs should be huge this season.

After a few days off to revel in Canada Day and 4th festivities, we’re back with more of the 2009 RotoRob NFL Draft Kit with yet another team preview (we’re on the home stretch now, with just a dozen NFC teams left to tackle). We’re going to try to shoot out all these team previews and then start releasing the kit’s other goodies (cheat sheets, sleepers/busts lists, etc.). Before we wonder if the New York Giants can recover from last season’s playoff disappointment, it’s important to acknowledge the death of the great Steve McNair, who was tragically murdered Saturday at the age of 36. I always admired his resiliency, and he’ll be missed.

Umm, not too much went well for Giant Fantasy interests in 2008. Sure, Brandon Jacobs and Derrick Ward both surpassed 1,000 yards, but both effectively took the Fantasy potency away from the other. Jacobs’ 15 touchdowns allowed him to rank 12th at running back (in standard scoring) while Ward’s impressive yardage numbers boosted him to 23rd despite a measly two touchdowns.

Eli Manning continued his inconsistent career as he had 10 games of under 200 yards passing. He did manage to complete better than 60 per cent of his passes for the first time in his career and he remained a solid Fantasy backup, but it’s looking more and more likely that Manning just isn’t a Fantasy starter. Oh, and then there was the whole Plaxico Burress shooting incident. Burress’ absence left a void mostly unfilled last year. Domenik Hixon was the most able replacement, leading the team with a measly 596 receiving yards. Finally, Kevin Boss got some buzz as a sleeper last year (not by myself, mind you) and that went rather poorly. He was an apt blocker, but no Fantasy team cares about that.

While the Giants flirted with just about every free agent wide out that came onto the market, they ended up holding off on any Fantasy impact additions. On the plus side, they did let Ward scurry off to Tampa Bay, which is encouraging for the Fantasy potential of Jacobs. Ahmad Bradshaw will see a bigger part of the pie, but Jacobs should be in line to at least approach 300 carries in 2009, assuming he can stay healthy.

While New York passed on free agent wide outs, it did feel a need to use its first round pick on one in the form of UNC’s Hakeem Nicks. Nicks was pegged by some as perhaps the most NFL-ready of the wide outs in the draft (aside from Michael Crabtree, I assume). For now, he’s entrenched behind Hixon and Steve Smith (NYG) for a starting spot. And yes, I’m pretty sure Smith’s (NYG) legal name includes the ‘(NYG).’ Seriously, look it up.

Manning is going to be the starter for a long time, no matter what I say. So I’ll just be nice and say that he definitely is better than David Carr. Probably.

As previously mentioned, it’s all about Jacobs now. He’s dealt with injuries in the past, but if he’s healthy, he will outperform his draft position. Aside from that, Bradshaw is a worthy handcuff in deeper leagues.

Nicks is one of those late first round wide outs getting positive press from the off-season workouts. He’s definitely a sleeper candidate, although the normal rule that rookie wide outs tend to not be great Fantasy options still applies. Of the two starters on paper, I’m personally more intrigued by Smith (NYG) as it is his third year. I think he might surprise moreso than Hixon. But any of the three could step up as the top option.

Little to no Fantasy value here. Boss will contribute with the odd good game, but he’s not worth drafting. Just avoid this group.

It was nice to see the Giant defense get back to the strong play last year that the team has historically been known for. The past few seasons have actually been a defensive struggle for New York, ranking 25th in yards allowed a few seasons ago and only 17th in points allowed two years ago. There’s no reason to think it won’t be a solid value defense again in 2009.

By Andy Goldstein
Tags: 2009 NFL Draft Kit
This entry was posted on Sunday, July 5th, 2009 at 1:52 pm and is filed under 2009 RotoRob NFL Draft Kit, Andy Goldstein, FOOTBALL, Team report. You can follow any responses to this entry through the RSS 2.0 feed. Both comments and pings are currently closed.