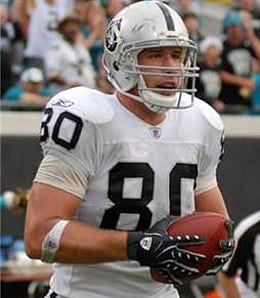 Zach Miller’s emergence was one of the best things to happen to the Raiders in 2008.

We’re got more of the 2009 RotoRob NFL Draft Kit for you today with yet another team preview. We’re going to try to shoot out all these team previews and then start releasing the kit’s other goodies (cheat sheets, sleepers/busts lists, etc.). While you wonder whether Donte’ Stallworth’s NFL punishment was just or not, let’s examine whether the Raiders can snap a streak of six straight losing seasons.

The Raiders actually closed 2008 fairly strong, beating in Week 16 a streaking Houston club that had won four straight and preventing the Buccaneers (and former coach Jon Gruden) from reaching the postseason with an improbable 31-24 win in Tampa Bay on the final Sunday of the year. Zach Miller emerged as a very solid NFL tight end, comfortably leading the club in receptions (56) and receiving yards (778), and the team appears to have the makings of a quality backfield with last year’s first-rounder Darren McFadden, veteran Justin Fargas and Michael Bush, who ran for 177 yards and two scores in that fateful Week 17 encounter with the Bucs.

For the sixth consecutive season, the Silver and Black lost at least 11 games while turning to their fifth head coach in that time following the bizarre firing of Lane Kiffin. Al Davis was once again foolish with his money, signing injury-plagued Javon Walker to a six-year, $55 million deal, and DeAngelo Hall to a seven-year, $72 million contract, only to cut him in mid-November to avoid paying out approximately $16 million in injury-guaranteed bonuses. Former No. 1 pick JaMarcus Russell continued to have problems with his accuracy, contributing heavily to a passing game that ranked dead last.

Tom Cable, who took over for Kiffin, had the interim tag removed and will be the head coach this year, though both coordinators and several assistants departed. The Raiders were also unusually quiet on the personnel front, limiting their involvement in free agency to some occasional dabbling, highlighted by the additions of veterans Jeff Garcia and Greg Ellis. It was a different approach for the Raiders, who have been the poster boys for fiscal irresponsibility in recent years, but it’s unlikely Oakland will be pushing for a playoff berth with a roster eerily similar to the one that managed just five wins in 2008.

While the Raiders may have elected to sit on their pocketbooks in free agency, they still managed to create some jaw-dropping decisions on draft day. The selection of unpolished burner Darrius Heyward-Bey with the seventh overall selection — with Michael Crabtree and Jeremy Maclin still on the board — was perhaps the draft’s most scrutinized pick, and if it wasn’t, second-rounder Michael Mitchell may have taken that honour. Heyward-Bey does possess prototypical deep speed, but it remains to be seen if that’s enough to overcome inconsistent hands and an inaccurate quarterback, albeit one with a great arm.

The optimist will point to Russell’s final three games — 626 passing yards, six touchdowns, two interceptions and a 62.8 completion percentage — as signs of growth. The realist will look at his full body of work and see a quarterback that completed fewer than 10 passes in a game four times and threw for fewer than 70 yards three times. The development of Miller and drafting of Heyward-Bey helps, as should a healthy Walker, but off-season reports continue to stress Russell’s poor accuracy. Garcia’s arrival gives Russell a veteran presence, though it’s not like Garcia is the NFL’s most fundamentally sound passer. Expect improvement from Russell, just not enough to make him draftable in standard leagues.

This is easily Oakland’s most intriguing position from a Fantasy perspective, as the Raiders boast three legitimate options. McFadden has the most potential despite an underwhelming rookie year. He has game-changing speed and is their best receiver out of the backfield. He’ll need to prove he can stay healthy after missing three full games and playing sparingly in three others, but he should be Oakland’s top offensive weapon. Bush missed all of 2007 after suffering a catastrophic knee injury at Louisville and got inconsistent work last season, seeing more than eight carries in a game just four times. However, in those four games, he averaged 92.5 rushing yards and 0.75 touchdowns. Fargas paced the Raiders in both carries (218) and yards (853) last season, but scored just once. He has battled injuries throughout his career, and at 29 has the least upside. For Fantasy purposes, McFadden is a solid No. 3 that could emerge as a legit No. 2, while Bush and Fargas are better suited to reserve roles — Fargas being the steadier of the two and Bush holding more potential.

One word: ewwwwwwwww. The Raiders receivers were awful last year with Johnnie Lee Higgins pacing the group with 22 receptions…22!!!??!? Walker was a total bust (15 receptions, 196 yards) and has now played a grand total of 33 games over the past four years combined. On the other side, Heyward-Bey is raw, and the most polished rookie receivers struggle to make a ripple in the Fantasy world. I could see using a late-rounder on Walker in case he returns to form, and Heyward-Bey is of interest in keeper leagues, but other than that there’s nothing to see here.

One could make a pretty compelling argument that Zach Miller is the only player associated with the Raider passing attack that should be owned in all leagues. The third-year pro is a reliable option for Russell — as tight ends so often are for young quarterbacks — and even his lack of touchdowns (one in 56 catches last year) shouldn’t keep him from being drafted as a low-end No. 1 tight end.

The Raiders generally do a good job of covering opposing receivers, but their run defense is akin to Swiss cheese…only without the cheesy parts surrounding the holes. On the other hand, their return game is phenomenal with Higgins and Justin Miller accounting for five touchdowns last season. As a combined unit, however, it’s hard to endorse them as anything but a match up play to cover bye weeks.

By Herija Green
Tags: Oakland Raiders, Zach Miller
This entry was posted on Saturday, June 20th, 2009 at 8:46 pm and is filed under 2009 RotoRob NFL Draft Kit, FOOTBALL, Herija Green, Team report. You can follow any responses to this entry through the RSS 2.0 feed. Both comments and pings are currently closed.