The Wire Troll: But Can He Play Guitar? 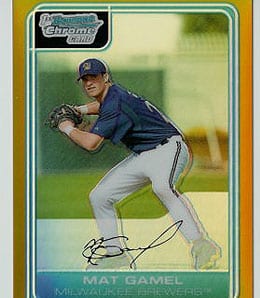 With the Brewers playing in AL parks this week, Mat Gamel will get more PT.

Week 11 of the 2009 schedule finds us looking at a full slate of inter-league games. For the Fantasy manager playing in leagues with weekly changes, we’re faced with the conundrum of keeping active lineups in place. This week we have the Brewers, Braves, Astros, and Diamondbacks all playing full schedules in AL parks. The Blue Jays, White Sox, Rays, and Athletics are on the road playing in the NL. All other squads are playing a split schedule in the upcoming week. Some of the players to watch are Mat Gamel, Eric Byrnes, and Jim Thome who stand to both gain and lose at bats in the upcoming week. And here are our waiver wire recommendations for the week:

Carlos Santana, C, Cleveland Indians: The 23-year-old Santana is currently enjoying a solid season at Double-A Akron, with 10 homers and 40 RBI. Acquired in the Casey Blake deal, Santana has vaulted to the top of the Indians prospect list, threatening to become almost as famous as the original Carlos Santana, the guitar god. Back in Spring Training, Mark Shapiro was raving about Santana’s catching skills and quality arm. Santana is blocked by both Kelly Shoppach and Victor Martinez, but with the Tribe in free fall and currently last in the AL Central, changes are going to be made. Looking down the road a bit, is moving Shoppach a possibility? Santana should be owned in all dynasty formats and is a name to be filed away for future reference in all other formats.

John Smoltz, SP, Boston Red Sox: It’s quickly becoming decision time for the Boston Red Sox. Smoltz is currently at Triple-A Pawtucket and his 30-day rehab assignment is coming to an end June 19. Daisuke Matsuzaka and Brad Penny are both struggling badly and after five rehab starts, Smoltz looks ready. He is definitely worthy of a pick up in all formats in the hopes that he can coax another half-season out of that surgically repaired shoulder.

Scott Feldman, SP, Texas Rangers: Since moving into the rotation at the end of April replacing Kris Benson, Feldman has been a model of consistency. In 65 2/3 IP, he is sporting a 3.70 ERA and 1.17 WHIP with five wins and 34 strikeouts. He’s only allowed more than three earned runs in one of his 10 starts. Brandon McCarthy is currently on the DL with a stress fracture in his right shoulder, further guaranteeing playing time for Feldman down the road. Feldman should be added in all formats.

Dan Meyer, RP, Florida Marlins: It appears that that Braves’ former round first round draft pick has finally found his niche in life. The Marlins plucked Meyer off waivers from the Athletics this past offseason and he has flourished in a short relief and set-up role. In 27 2/3 IP, he has allowed only 15 hits, six walks, and has 27 strikeouts. Meyer is a solid addition in NL-only leagues, and a must-own in leagues that use the holds category.

Kevin Kouzmanoff, 3B, San Diego Padres: In a span of 24 games from mid-April to mid- May the “Kouz” had no homers and only three RBI. This would explain why only 39 per cent of the teams playing in CBS leagues have him rostered. After this abysmal streak to start the season, the Kouzmanoff is finally starting to heat up. In the past week, he’s batting .400 with three homers and 12 RBI. He’s always been a streaky player and now that he’s on a bit of a tear get him going while the going’s good.

Gaby Sanchez, 1B/3B, Florida Marlins: The Emilio Bonifacio experiment appears to be drawing to a close for the Fish. The 25-year-old Sanchez is currently getting some action at third base for Triple-A New Orleans. Is this a precursor of things to come? He has hit six dingers, driven in 22 runs, and compiled a superb .325 BA down on the farm and continues to display his solid strike zone judgment with a 19/14 strikeout-to-walk ratio in 114 AB. Sanchez should be added in NL-only leagues and on the radar in deeper mixed formats at this time.

Cody Ross, OF, Florida Marlins: Ross has become a huge fan of the Great White North this weekend. In two games at the Rogers Centre, he has gone 4-for-8 with two homers and six RBI and is absolutely tearing the cover off the ball. If an outfielder that has 25-85 potential is an asset on your Fantasy squad’s roster, grab Ross quick before the rest of your league figures it out.

Delmon Young, OF, Minnesota Twins: Michael Cuddyer’s hand injury is flaring up again, Jason Kubel is dealing with a wonky knee, Carlos Gomez is still struggling to figure out the strike zone, and Denard Span is suffering through dizzy spells. The Twins are struggling in the outfield and Young is the benefactor of this mess. The 23-year-old is batting .348 BA with four RBI and four runs scored in the past week. The Twin outfield situation should guarantee steady playing time over at least the next several weeks, making Young a solid acquisition in all formats.

Sean Rodriguez, 2B, Los Angeles Angels: The Halos finally tired of the struggling Howie Kendrick and sent him packing this week. Let’s face it: when your principle asset is your batting average and you’re currently hitting .231, something has to be done. The 24-year-old Rodriguez was promoted to fill the vacancy. In 205 AB at Triple-A Salt Lake, he managed to clout 21 homers and 60 RBI. The power potential is obvious, but with 69 strikeouts we are not looking at a hitter with great strike zone judgment. Rodriguez should be added in all leagues just for that middle infielder power possibility.

By Tim McLeod
This entry was posted on Sunday, June 14th, 2009 at 12:24 pm and is filed under BASEBALL, The Wire Troll, Tim McLeod. You can follow any responses to this entry through the RSS 2.0 feed. You can skip to the end and leave a response. Pinging is currently not allowed.