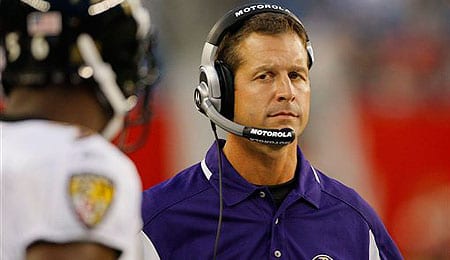 John Harbaugh perfected his annoyed look while leading the Ravens to within a win of the AFC Championship.

It’s Monday, and what better a way is there to kick off the working week than with more of the 2009 RotoRob NFL Draft Kit? Today, Todd checks in with his first football article for the site. Once we wrap up these team previews (this is the fifth already), we’re going to start releasing the kit’s other goodies (cheat sheets, sleepers/busts lists, etc.). Are you transfixed with excitement yet?

Going into last season, no one was sure what to expect from the Ravens. Little known John Harbaugh was hired as head coach and handed the reigns of the offense to rookie QB Joe Flacco. Together they made beautiful music together to the tune of an 11-5 record, a Wild Card berth and an appearance in the AFC championship game. The rushing game was strong with Willis McGahee and La’Ron McClain leading the way to the tune of 148.5 yards per game, good for fourth best in the league.

There was the little problem of not being able to beat the Steelers. Three times the Ravens lost to Pittsburgh and that cost them the division and a trip to the Super Bowl. While Flacco guided an efficient offense, from a Fantasy perspective it wasn’t one that put up numbers to get excited about.

Defensive coordinator Rex Ryan left to become the head coach of the New York Jets. He was soon followed by LB Bart Scott who chose to leave Ray Lewis’ shadow and lead a defense he could call his own. After a flirtation with free agency, Lewis re-signed with the team.

The Ravens took advantage of a tackle-heavy draft and had Mississippi’s Michael Oher fall into their laps at 23. While he may not start right away, Oher’s a great talent who should protect Flacco for years to come. Third round pick CB Lardarius Webb is said to be dynamic in the return game and a real ball hawk on on defense.

Give credit to Harbaugh and offensive coordinator Cam Cameron for putting Flacco in a situation where he could succeed. Flacco ran an efficient, but not a very dynamic offense. We’ll find out this year if Harbaugh is a play it safe kind of guy or someone willing to take some risks with his QB. We do know that Cameron had some pretty sweet offenses in his Charger days and he helped Phillip Rivers develop. Expect Flacco to take a small leap forward this year. His weapons aren’t that spectacular, but the kid has the skills.

While McClain led the team in rushing and TDs last season, The Baltimore Sun reported that he showed up to training camp about 20 pounds overweight and has been relegated to fullback. McGahee is the most talented back on the roster, but injuries and attitude have held him back. It’s been reported that 2008 second round pick Ray Rice, not McGahee, has been working with the first team. This situation is worth keeping an eye on as Cameron knows how to get his RBs into the endzone.

The conservative nature of the Baltimore attack last year limited the effectiveness of its wide receivers. Still, Derrick Mason had a fine season with 80 receptions for over 1,000 yards and five TDs. You can expect those numbers to improve as Flacco grows into the QB position this year. Mark Clayton was an effective second target with 41 receptions and three TDs. Still, you don’t want to have anything to do with him Fantasy-wise.

Todd Heap has never lived up to his potential as a former first round pick. It’s possible that much of that lies in the crappy QB play he’s had to endure since he turned pro. You would think that a rookie QB would find a security blanket in a good TE, but Flacco and Heap only hooked up 35 times. That may say as much about Heap’s ability as it does Flacco’s.

When you think of great defenses the Ravens undoubtedly come to mind. B-More’s D gave up only 261.1 yards per game last year, second to only the Steelers, including 81.4 on the ground, again second only to the Steelers. They also gave up an average of 15.3 points per game, good for third best in the NFL. Those numbers will keep any team in a game. Kicker Matt Stover is pretty much money from inside 40 yards. A more effective offense should give him more scoring opportunities. The Ravens scored six defensive TDs last year, but didn’t muster any in the return game.

By Todd Habiger
This entry was posted on Monday, June 15th, 2009 at 10:37 am and is filed under 2009 RotoRob NFL Draft Kit, FOOTBALL, Team report, Todd Habiger. You can follow any responses to this entry through the RSS 2.0 feed. You can leave a response, or trackback from your own site.