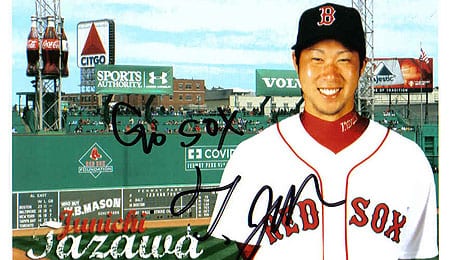 The way Junichi Tazawa is dealing at Double-A, it won’t be long before he’s casting a shadow at Fenway.

When we last discussed Junichi Tazawa he was embroiled in controversy and single handily was being held responsible for rewriting the rules of the game in the Far East. We have now completed the first two months of the 2009 campaign and it’s time to take a look at how the former Industrial League phenom is adapting to life on this side of the Pacific.

The 23-year-old right hander enjoyed a very strong spring in his first MLB training camp. In nine IP, he allowed only one earned run, with 10 strikeouts and one walk. He was optioned to the Double-A Portland Seadogs on March 22 for his inaugural season in North America.

Tazawa is currently sporting a 7-3 won-loss record, good for a tie for first in wins in the Eastern League. The Red Sox are being very patient with Tazawa so far and obviously are working him into their system and allowing him to build arm strength, a prudent move. His longest outing has been seven innings, so obviously a strict pitch count is being observed. In 67 1/3 IP, Tazawa is sporting a ERA of 2.67, while allowing 53 hits and only 19 walks, good for a 1.07 WHIP. He has 63 strikeouts, leaving him tied for third overall in the league. Only twice in his 12 starts for the Dogs has he allowed three runs or more — a rather impressive debut I’d say!

Tazawa has been extremely consistent and over his last eight starts his walk totals by game read: 2, 1, 1, 1, 2, 2, 0, 2. It appears that the control problems that plague many of his fellow countrymen upon arriving here are not currently an issue. The Red Sox and Tazawa must be extremely pleased with his early development and it looks like other than building arm strength and familiarity with the North American game he currently has very little left to prove at the Double-A level.

This then brings us to what’s on the horizon for Tazawa. A promotion to Triple-A is probably in the offing, with my guess that this happens around mid-July as he continues his trek to the big league club. The Red Sox will undoubtedly be very careful in not rushing the youngster, a very prudent organizational strategy. What does this then mean to the Fantasy player? “Get on the bus, Gus,” because it’s leaving the station for what could be a very long and enjoyable ride. In deep dynasty keeper leagues, Tazawa should be snatched up quick. He’s currently a bit off the radar, but with the successes he’s had you can be sure he won’t be for much longer.

The Red Sox continue to build an effective arsenal of young starting pitching through their minor league system. The trio of Clay Buchholz, Michael Bowden, and now Tazawa provides the Red Sox with an exceptional talent base heading into the future. Boston’s scouting department is second to none and I take my hat off to Craig Shipley, Senior Vice President of International Scouting, for another job well done.

Good fortunes, or should I say “gambatte,” Junichi Tazawa as you continue your journey towards the ultimate goal, a spot in the Boston Red Sox starting rotation.

By Tim McLeod
This entry was posted on Sunday, June 14th, 2009 at 11:35 am and is filed under BASEBALL, Prospects, Tim McLeod. You can follow any responses to this entry through the RSS 2.0 feed. You can leave a response, or trackback from your own site.