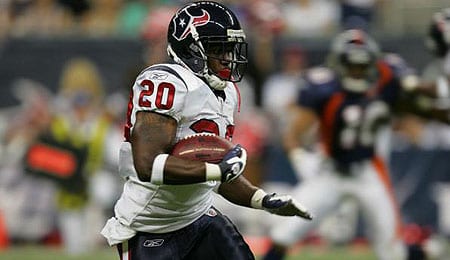 Can Steve Slaton build on his impressive rookie season?

We’re on a roll now with the 2009 RotoRob NFL Draft Kit as we release yet another team preview. We’re going to try to shoot out all these team previews and then start releasing the kit’s other goodies (cheat sheets, sleepers/busts lists, etc.). Stay tuned.

After being in existence since 2002, the Houston Texans learned what happens when good pass protection mixes with good run blocking. Only New Orleans and Denver averaged more yards per game than the Texans. Led by wide receiver extraordinaire Andre Johnson, the Houston passing attack finished fourth in the league despite starter Matt Schaub missing time due to an injury and Sage Rosenfels being well…Sage Rosenfels. The running game was nearly equal to the task, led by rookie runner Steve Slaton, who ran for over 1,200 yards and compiled 10 touchdowns.

Apparently, the Texans’ franchise can only handle one big problem at a time. They finished 8-8 with a good offense while the other side of the ball laboured again. The defense, which has never lit the world on fire, once again played sub par, ranking 22nd overall. While that issue could certainly help keep them out of the playoffs, the quarterback position is not helping matters. Schaub missed five games for the second year in a row. However, in 2009, they will not have Rosenfels to fall back on or to watch implode in the fourth quarter of games. Okay, I’ll chill with the Rosenfels jokes…at least until I reach the quarterbacks section.

Houston’s attention went to defense during the offseason. The Texans signed former Arizona Cardinal defensive end Antonio Smith to play opposite of star defensive end Mario Williams. They also signed veteran linebacker Cato June and added former USC standout backer Brian Cushing. The moves should help enhance a previously underwhelming front seven. Offensively, Houston tried to offset the Rosenfels loss by signing former Lion quarterback Dan Orlovsky. You remember him, don’t you? He is the guy who ran out of the endzone last season at Minnesota for a safety. Uh oh.

Along with the Cushing selection, Houston used three of its first four picks on defensive players. In fact, all but three of the Texans’ eight picks came from the defensive ledger. Wisely, Houston addressed depth issues on defense, while taking a couple of gambles on offensive players like tight ends Anthony Hill and James Casey, whom along with veteran Owen Daniels, should provide more depth and versatility at the tight end spot.

Fantasy pundits keep waiting for Schaub to have that breakthrough season. It hasn’t happened yet, though. He has missed 10 games over the past two seasons and needs to prove that he’s durable. Unlike last season when Sage “I’m going to jump over the entire Colts’ defense late in the fourth quarter” Rosenfels stepped in for Schaub, the new back-up quarterback is Orlovsky, who helped author an 0-16 Detroit season. That’s not a comforting thought for Texan fans.

Entering 2008, some pundits believed that Slaton would be used as a third-down back. Yet, opportunity came calling after Ahman Green went into the tank. Slaton amassed over 1,200 yards rushing on the way to an impressive rookie campaign. The biggest question mark at running back is the depth behind the second-year star. Ryan Moats and Chris Brown, who hasn’t carried a football since 2007, are among the contenders to help give Slaton a breather. When it comes to Fantasy value and the Houston backs, it’s Slaton or bust due to the lack of solid depth.

Houston’s receivers are dangerous and versatile with Johnson at the forefront. Lost in the barrage of the NFL media’s “Larry Fitzgerald is the ruler of the universe” campaign, Johnson led the NFL in receptions and yardage during the ’08 season. Entering his seventh season, he shares the same middle name as yours truly (Lamont), which earns a few brownie points with me. Don’t forget about fellow wideout Kevin Walter, who hauled in eight touchdowns and is a respectable receiving option especially in larger leagues. Besides those two, the Texans are light in depth at receiver with Jacoby Jones and Andre Davis best suited as special teams players.

Owen Daniels serves as one of the most reliable Houston receiving options outside of Johnson. Daniels is a bit stubborn these days, however. He owns the dubious honour of being the only unsigned restricted free agent over his desire for a long-term deal. Don’t expect this to hold up, he will return. Rookie tight ends Hill and Casey will be pressed into duty until Daniels returns, but don’t expect them to have a significant impact with or without Daniels in the lineup.

As mentioned earlier, Houston’s defense left much to be desired in 2008. In order for the Texans to develop into a good defensive team, they will need far more than linebacker DeMeco Ryans and Williams creating havoc. Moves to improve the linebacking group should improve the defense and make it a bit more active than in years past. Return man Jacoby Jones can be a game changer with his speed and ability to take punt returns the distance as he did twice in ’08. Kicker Kris Brown is likely to have plenty of chances to produce with one of the AFC’s top offenses at his disposal.

By Derek Jones
This entry was posted on Thursday, June 11th, 2009 at 1:22 pm and is filed under 2009 RotoRob NFL Draft Kit, Derek Jones, FOOTBALL, Team report. You can follow any responses to this entry through the RSS 2.0 feed. You can skip to the end and leave a response. Pinging is currently not allowed.