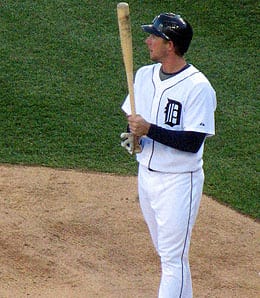 Thankfully, the Tigers sent Clete Thomas back where he belongs, to Triple-A. I’ve been wondering what the deal is lately; why has Detroit been platooning Thomas in right field, starting him against righties in favour of Magglio Ordonez? Thomas, the strikeout machine (another two Ks in an 0-for-4 performance Thursday), is batting just .230 vs. RHPs. Ordonez, meanwhile, is batting .267 against righties. Oh, I get it. So, let’s keep sitting an All-Star and in his place, keep trotting out a dude hitting .120 with a 465 OPS in June. Uh, yeah. How are the Tigers in first place in the AL Central again? Good thing it’s the worst division in baseball.

Another Tiger back-up outfielder who has failed to wow me is Ryan Raburn. I wasn’t exactly bullish on his prospects when he was called up, but he hit well in May in limited action (.300 BA, 914 OPS). However, he’s been awful in June, batting just .160 with a 516 OPS. He’s currently mired in a 3-for-21 slump, but one of those hits came Thursday night and, followed by a stolen base, it helps sparked a rally as the Tigers scored twice to tie the game in the top of the ninth, only to lose it in the bottom of the inning. I can’t really figure out Raburn’s career trends. He’s improved his strikeout rate and his batting eye just keeps getting better, yet his BA continues to slip. He’s on pace for a career high in at bats and his extra-base pop has bounced back somewhat this season, so the news isn’t all bad. But at this point, Raburn has essentially zero Fantasy value, regardless of the format you play in. Okay, maybe in a 40-team AL-only league, you might find him useful. Maybe.

Still with the clawless Tigers, Placido Polanco’s slow start has stretched into June, and while that might make him a tremendous buy-low candidate, we’re still waiting to see that career .303 hitter rear his head. On Tuesday, Polanco showed some signs of life, going 2-for-4 with a double, walk and three ribbies, but he was 0-for-3 with a walk Wednesday and then was given the day off Thursday. He did appear as a defensive replacement in the ninth after Ramon Santiago had to shift over to shortstop to replace Adam Everett, lifted for a pinch-hitter. Anyways, it was kind of ironic that Polanco was put in for defensive reasons, given that he was unable to make a diving stop of Scott Podsednik’s game-winning single in the bottom of the ninth. Polanco has been getting dumped in some leagues as owners grow impatient. I can’t say I blame them – after all, he’s barely a top 40 second baseman so far, a far cry from the top 15 where we had him ranked in the preseason. But the fact is Santiago is now outplaying him and if Polanco doesn’t get his act together soon, you have to wonder how often Polanco will be sitting in favour of Santiago.

Yet another Tiger enduring a very slow start is Magglio Ordonez, who as discussed above, has been sitting against righties with regularity in recent games. Can someone explain to me why he’s batting cleanup for Detroit? Sure, the Tigers are still atop the division, but if just one of those teams below them finally wakes up, this team is in trouble. The fact that Maggs is struggling in the four-hole is not helping. He hit .241 with a 649 OPS in April, and while he bounced back in May (.315), he failed to go yard in the entire month. Where is his power? He’s struggling again (654 OPS) in June, and even a date Wednesday against one of his all-time favourite pitchers to hit against, John Danks, failed to spark Ordonez. He came in a 10-for-17 career hitter against Danks, but went just 1-for-4 with a run and a strikeout on Wednesday. And then Thursday, he was on the pine. Small wonder that Ordonez has started to get jettisoned from some shallower leagues. We projected this dude as a top 30 outfielder, and while he’s doing a great job of drawing walks, with his power MIA, Ordonez is barely playing like a top 80 outfielder right now.

Hell, even Miguel Cabrera, who was impossible to get out the first two months of the season, has suddenly gone into the tank. He’s chilled considerably in June, currently mired in a 3-for-26 slump which has seen him drop to sixth in the American League hitting race. While Cabrera is hitting better than his first season in Detroit, his power is at its weakest since he was a rookie. Perhaps that’s because he’s hitting fly balls less often than ever before in his career.

While his OPS has dipped this year, Fantasy owners are not going to complain about Curtis Granderson, considering he’s headed for career highs in both home runs and stolen bases. Thursday, Granderson snapped a 5-for-30 slump with a big night, going 3-for-4 with a double and a game-tying, two-run homer with two outs in the ninth. It looked like Grandy would be the hero until, of course, the Tigers allowed the White Sox to score the winning run in the bottom of the frame. Granderson started sluggishly, batting .241 in April, but he upped that to .270 in May and is raking at a .310 clip with an OPS of 824 in June. The key for him has been good health so far this year, and that’s one of the reasons why an outfielder we expected to be a top 20 flyhawk has been nearly good enough to be among the top 10. One caveat: don’t expect Granderson’s home run rate to continue at this pace. Currently, he’s hitting at any extremely high flyball rate, but I’d be shocked if that can proceed for much longer. It may be reasonable to think Granderson will hit 30 bombs this year, but approach 40? I don’t think so.

By RotoRob
This entry was posted on Friday, June 12th, 2009 at 11:15 am and is filed under BASEBALL, Fantasy Notes, RotoRob. You can follow any responses to this entry through the RSS 2.0 feed. You can skip to the end and leave a response. Pinging is currently not allowed.