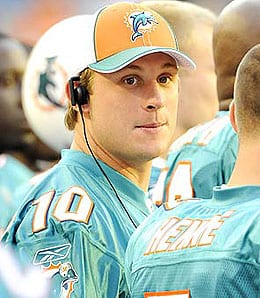 We continue the 2009 RotoRob NFL Draft Kit today with another team preview. We’re going to try to shoot out all these team previews and then start releasing the kit’s other goodies (cheat sheets, sleepers/busts lists, etc.). Stay tuned.

As a team, the 2008 Miami Dolphins were the feel-good story of the NFL. Coming off a one-win season in 2007, the 2008 squad had little expectation to succeed in the tough AFC East. However, with the introduction of the Wildcat offense and the signing of Chad Pennington, the Dolphins had a remarkable turnaround season and won the AFC East with an 11-5 record.

Fantasy-wise, the Miami Dolphins did not have a great 2008 and I wouldn’t look for any major fantasy stars from Miami in 2009 either. Pennington had a solid season with 3,653 yards and 19 touchdowns but you cannot expect much more from him. The inclusion of the Wildcat offense in the Dolphin playbook lead to many plays with both Ronnie Brown and Ricky Williams on the field together. Although both runners were highly effective, the splitting of carries hampered their Fantasy production. Dolphins’ receivers weren’t exactly Fantasy studly either. Ted Ginn, Jr. showed some signs of life, while Greg Camarillo did his best Wes Welker impersonation until he went down with a season-ending injury. Devone Bess filled in admirably, but again, was not a huge Fantasy contributor.

There were rumours in the offseason that the Dolphins would attempt to trade for Anquan Boldin but that died quickly. The remainder of the Dolphin offseason was very quiet until the past few weeks. The team did bring back Jason Taylor for a significant discount, but Miami only made headlines in the past few weeks jabbing with its two division rivals. First, Joey Porter and Channing Crowder were quoted as not buying into the Patriot hype and made the statement that the AFC East goes through Miami. Then, Crowder and new Jet head coach Rex Ryan traded jabs in the media.

The Dolphins had a somewhat predictable 2009 draft with one major exception. Going into the draft, many thought they would focus on their most obvious deficiencies: cornerback and receiver. Well, Miami took Illinois CB Vontae Davis with its first pick but caught many off guard with the selection of West Virginia QB Pat White in the second round. It will be interesting to see how quickly White is incorporated into the Wildcat offense. The Dolphins did take two receivers, Patrick Turner from USC in the third round, and Brian Hartline from Ohio State in the fourth round.

Pennington will be the starter for the Dolphins in 2009 with Chad Henne backing him up. As I discussed above, Pennington had a very consistent and solid 2008 season. He threw for 19 touchdowns and only seven interceptions and was the second highest rated quarterback in the league behind only Philip Rivers. However, that being said, Pennington will not blow you away with Fantasy statistics and he remains a middle of the pack quarterback in most standard leagues.

Brown and Williams are both excellent running backs and both have had seasons as monster Fantasy contributors. However, as long as both are healthy and splitting carries, neither will excel like in seasons past. In 2008, Brown finished with 916 yards and 10 touchdowns. On the surface that is a pretty solid season, but if you remove his four-touchdown game against New England and factor in that he only rushed for 100 yards or more three times all season, you can see that his numbers were not that spectacular. Williams finished 2008 with five touchdowns and 659 yards. Last year was Brown’s first season back from an ACL injury so I would expect some improvement but he is not an upper echelon back anymore as long as Williams is healthy.

As I mentioned, the Dolphin receivers are not Fantasy studs by any stretch of the imagination, although Ginn did show significant improvement from his rookie season and finished 2008 with four touchdowns and 790 receiving yards. He’s entering that magical third year for wide receivers, so I look for continued improvement from him as he continues to mature. Camarillo was having a career season until he tore his ACL in Week 12. At that point in the season, he had 55 catches for 613 yards and two touchdowns and was quickly becoming the possession receiver the Dolphins needed to compliment Pennington’s short passing game. It appears Camarillo will be ready for the 2009 season, but look for Bess, who replaced him last season, to get a lot of looks with the first squad. In addition, rookie receivers Turner and Hartline will be thrown into the competition as the Dolphins look for wideouts to step up. Camarillo could be a late-value draft pick if he can return to his 2008 first half form, but look for Bess, Turner and Hartline to infringe on his value.

Perhaps the biggest fantasy asset and breakthrough for the Dolphins in 2008 was Anthony Fasano. He finished with 34 catches for 454 yards and seven touchdowns, which led the team. Fasano shared time with David Martin but Fasano was a much better pass catcher and Pennington continually found Fasano in the endzone. I would target Fasano as a number one tight end given Pennington’s propensity to look for tight ends in the red zone.

The Dolphin special teams did not score a touchdown last year which is surprising given that both Ginn and Bess were involved with returning punts and kickoffs. The defense had a solid season, but did not finish in the top half of Fantasy defenses in most leagues. Porter was among the league leaders with 18 sacks and Crowder had over 100 tackles. The Dolphins took Davis in the first round and he should get a chance to start at corner. I would consider Miami a low-end number one defensive unit.