The Wire Troll: Tommy, Can You Hear Me? 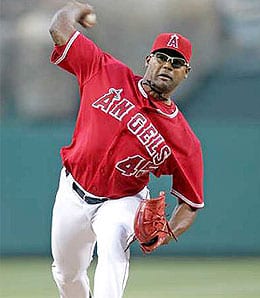 It would be impossible to not mention Tommy Hanson in this week’s column. At the same time, it is difficult to recommend picking up Hanson as he’s been owned in most leagues since the spring drafts. The 22-year-old phenom begins his MLB career Sunday (he’s perfect through 3 1/3 IP, by the way) when he faces the Brewers at Turner Field. Hanson has been totally dominant at Triple-A Gwinnett this season, allowing only 40 hits and 17 walks while striking out 90 in 66 1/3 IP with a 1.49 ERA. Fantasy owners have been anxiously waiting for this day since the beginning of the 2009 campaign. Good fortunes, “Tommy Boy,” in what should be a long and stellar career!

Kelvim Escobar, Los Angeles Angels, SP: Escobar made his return to the Angel rotation Saturday and pitched decently in a 2-1 loss to Detroit. In five IP he allowed four hits, two earned runs and four walks while striking out five. When he’s healthy, Escobar should be active in all formats and based on that first start, it appears he’s healthy. The big question is how long will this good health last? What I find intriguing about Escobar is that the bullpen might be a great fit for him at this stage of his career. Scot Shields is hurting and on the DL, and both Jose Arredondo and Brian Fuentes aren’t having spectacular years, so why not? It’s not like he hasn’t done it before.

Gordon Beckham, Chicago White Sox, 2B/3B: As recently as April 27, White Sox Manager Ozzie Guillen stated, “If you see Beckham in the big league, we are in trouble.” Yes, Ozzie, you are in trouble. The 22-year-old Beckham was called up Thursday after going 13-for-28 in the previous seven games at Triple-A Charlotte. He is ready and should be owned in all formats.

Carlos Gonzalez, Colorado Rockies, OF: The 23-year-old Gonzalez, who was enjoying a great season at Triple-A Colorado Springs, with 10 homers, 59 RBI, and a .339 BA, was called up Friday. It’s currently a bit crowded in the Rockies’ outfield, with Dexter Fowler, Seth Smith, and Gonzalez fighting for two of the three outfield slots. It looks like Ryan Spilborghs is going to be the big loser with this series of moves. Gonzalez is a solid addition in NL-only leagues and keeper leagues, but until the playing time issues get resolved, mixed leagues are a bit of a reach, unless your league has a deep bench.

Andrew McCutchen, Pittsburgh Pirates, OF: It’s hard to believe that just a short year ago the Pirate outfield consisted of Jason Bay, Nate McClouth, and Xavier Nady. The trade of McClouth this past week to the Braves opens up centrefield for the 22-year-old McCutchen. At Triple-A Indianapolis, McCutchen compiled four homers, 20 RBI, 10 stolen bases and a .303 BA. He’s been inserted into the lead-off spot for the Pirates and should be owned in all formats. Five-tool prospects with McCutchen’s upside are few and far between.

Vince Mazzaro, Oakland Athletics, SP: In his last four starts at Triple-A Sacramento prior to his promotion this past week, he managed not one, but two eight inning one-hitters and allowed only one earned run in those four starts. In Mazzaro’s first start with the A’s Tuesday, he managed his first big league win by pitching 6 1/3 innings of shutout ball. The A’s just keep on cranking out those fine young pitching prospects and Mazzaro is another to add to the list. He is a solid addition in AL-only, H2H, and keeper formats.

Matt Maloney, Cincinnati Reds, SP: Maloney made his debut Saturday and had a solid start and win opportunity ruined by the relief stylings of the aging David Weathers. In six IP, Maloney allowed six hits, one walk and two earned runs while fanning four. At Triple-A Louisville, he allowed only nine free passes and struck out 58 in 67 1/3 IP. In Maloney’s last five starts in the minors, he pitched at least seven innings in each start and allowed only three earned runs total with 25 strikeouts. Those are some very impressive numbers — I’m especially bullish about his control — so he is a must-add in NL-only leagues and keeper leagues and should be on in the radar in standard 12-team mixed leagues.

Rod Barajas, Toronto Blue Jays, C: Now here’s an example of a guy that is getting very little respect. Barajas is currently fourth at his position in RBI with 29 and third in BA with a solid .288. He’s currently owned by only 42 per cent of teams playing in leagues at CBS, so if he’s currently available in your league, find a home for him right smartly.

Laynce Nix, Cincinnati Reds, OF: Chris Dickerson has been struggling as of late and former Rangers’ prospect Nix has been the beneficiary. In the past week, he’s moved into a full-time role for the Reds and has three homers and eight RBI over that span. The power is real, anything over a .250 BA isn’t. Nix should see regular playing time, at least short term, making him a solid addition in NL-only, H2H, and deeper formats.

Ian Stewart, Colorado Rockies, 2B/3B/OF: Ignore the batting average, it will get better. Pay very strict attention to the power numbers, especially in the past week. In his past four games, Stewart has been on a tear. He’s managed four homers, 12 RBI and a .588 BA. Grab him quick if he’s still out there in your league.

Jeremy Bonderman, Detroit Tigers, SP: The 26-year-old Bonderman is getting his first start Monday since June 2008 surgery to correct a circulation problem. He has been rehabbing at Triple-A Toledo and in his last start pitched eight shutout innings, allowing six hits and striking out five. The Tigers are hoping he can regain that 2006 form and slide into the fifth slot in the rotation replacing the struggling Armando Galarraga. Bonderman is a potential two-start pitcher this week, so is worth the gamble in AL-only and H2H leagues, but I’d wait a week for the results before taking the plunge in standard 12 team leagues.

John Smoltz, Boston Red Sox, SP: Smoltz is currently hitting low 90s on the radar and the surgically repaired shoulder looks good to go. In his last rehab start at Triple-A Pawtucket Saturday, he pitched six innings of one-hit ball while walking two and striking out three. Smoltz is tentatively scheduled to join the parent team June 16, but it will pay to leap a bit early on him before that first start with the Red Sox is carved in stone.

Bobby Parnell, New York Mets, RP: J.J. Putz is on the DL and will miss the next several months after surgery to repair a bone spur in his elbow. Parnell has very quietly moved into the set-up role for the Mets. Francisco Rodriguez is dealing with back issues, so there is always the possibility that Parnell could provide some cheap saves on those days that the Mets need to rest K-Rod. Parnell is a solid add in NL-only and leagues that use the holds category.

Mike MacDougal, Washington Nationals, RP: Newflash — Joel Hanrahan implodes again, and is demoted, once again. Nice circus you’re running in Washington, Manny Acta. If you’re desperate for save opportunities, and I mean desperate, MacDougal is getting the first shot at replacing the struggling Hanrahan. Just remember that Big Mac’s last successful season closing was in 2005 when he saved 21 for the Royals. This season at Triple-A Syracuse in 8 1/3 IP he managed to allow five walks, which should be a reminder to all of us as to why he was pitching at Triple-A in the first place.

Ryan Madson, Philadelphia Phillies, RP: There is clearly something wrong with Brad Lidge, as evidenced by his sixth blown save Saturday against the Dodgers. Charlie Manuel has stated that Lidge is his man, but for how long? Madson is the perfect insurance policy in the event that Lidge’s wonky knee causes him to miss time down the road. A quick scan of the six leagues I’m partaking in shows Madson is owned in five of the six. There are a lot of teams buying Lidge insurance right about now.

By Tim McLeod
This entry was posted on Sunday, June 7th, 2009 at 1:40 pm and is filed under BASEBALL, The Wire Troll, Tim McLeod. You can follow any responses to this entry through the RSS 2.0 feed. You can skip to the end and leave a response. Pinging is currently not allowed.