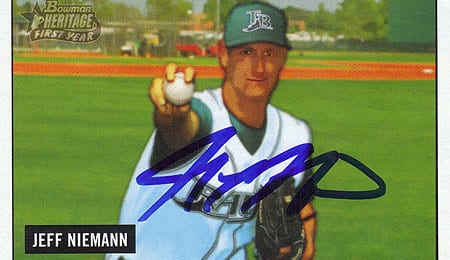 Your Jeff Niemann autographed card could soon be gaining in value with his solid performance lately.

Jeff Niemann drew plenty of attention after tossing the finest game of his career on Wednesday, a two-hit shutout with nine Ks and just one walk, but the truth is, he’s been pitching much better for a few weeks now, and it’s time to start considering him if you need help on the mound. In his last six starts, the hulking righty has given up just 30 hits and 10 runs (nine earned) in 34 1/3 IP, going 3-1 in the process. He’s allowed four homers, walked 10 and struck out 23 – showing markedly better command than he did to begin the season. Niemann should be picked up in AL-only leagues and it’s time to start watching him in mixed leagues – after all, the dude is on pace to win 14 games this year. He’ll get the Angels at home Tuesday – not a bad matchup considering Niemann has been much sharper at home this season, and the Angels – although hitting better lately – are hardly an offensive force so far in 2009.

While he probably only has value in an extremely deep AL-only league, it’s worth mentioning that Lance Cormier has really found his groove as the long reliever in the Ray bullpen this season. The groundball specialist (actually, he’s not inducing ground balls as often as he did last year) may have been a bit lucky so far, given how low his BABIP is, so while he’s clearly enjoying a career year, it’s reasonable to expect his ERA to rise closer to the 4.00+ he had last season. Cormier was solid in April and then absolutely superb in May, and the key for him has been dramatically improved control. He’s also never been this difficult to hit, but again, the fortuitous BABIP is a factor here. With the Rays rolling lately, Cormier hasn’t been needed for a week and a half, another reason he’s not a particularly strong Fantasy play. However, his career season deserves a nod.

J.P. Howell is the flavour of the week in the Ray bullpen, having earn the save Thursday. On Saturday, however, Howell blew the save and had to be bailed out by Randy Choate, although at least he wound up earning his first win of the season. Still, I think Howell is a good pickup in AL-only leagues at this point. He’s tossed seven straight scoreless outings and has been getting sharper as the season has progressed. Howell is another Tampa Bay reliever who has been aided by improved control, but even more impressive is the massive spike he’s seen in his K/9. His strikeout rate has risen every season he’s been in the bigs, but after averaging over nine Ks per nine innings last season, he’s racking up over 11 in 2009. Remember, he did a bit of closing last season when Troy Percival made one of his frequent trips to the DL. With Percival out yet again, and not guaranteed by any stretch to return this season – if ever – Howell is definitely worth a pickup in AL-only play, and should be on your radar if you’re playing in a mixed league.

By RotoRob
This entry was posted on Sunday, June 7th, 2009 at 2:59 pm and is filed under BASEBALL, Fantasy Notes, RotoRob. You can follow any responses to this entry through the RSS 2.0 feed. You can leave a response, or trackback from your own site.