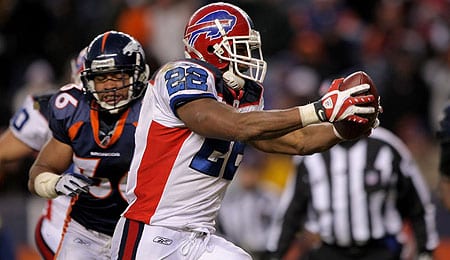 Fred Jackson should have some serious value for the first few weeks of the season.

Welcome to the 2009 RotoRob NFL Draft Kit. Over the next few weeks, we’ll be bringing you team-by-team previews, cheat sheets, sleepers, busts, rookies, and all sorts of goodies to help you prepare for Draft Day 2009. We’ll kick it off with a preview of the Buffalo Bills.

The 2008 season began with such excitement and promise as the Bills stormed out of the gates, winning five of their first six games. Much was expected of Marshawn Lynch in his second year in the league and he put together a solid 2008 campaign, gaining 1,047 yards and scoring eight touchdowns. Lynch’s backup, Fred Jackson, emerged as a legitimate option for the Bills and finished with 888 total yards and three touchdowns. Jackson showed his ability with 27 carries for 136 yards in the season finale against New England.

The Bills collapsed after their 5-1 start and underachieved the rest of the season, thereby disappointing their loyal fans by finishing 7-9 and becoming only one of three teams in NFL history to begin the season 5-1 and then go on to have a losing record. Trent Edwards didn’t have a great season and when he got hurt, J.P. Losman showed yet again that the Bills wasted a first round pick on a quarterback. The receiving corps of Lee Evans, Josh Reed and Roscoe Parrish just didn’t cut it, necessitating an off-season pick-up you may have heard something about.

When the Dallas Cowboys cut Terrell Owens on March 6, no one could have predicted that the Bills would sign him two days later. With the blessing of Edwards, Buffalo signed T.O. to a one-year deal looking to fill the void at receiver and compliment Evans, the Bills’ only other threat at receiver. The impact of signing T.O was felt immediately in Buffalo as flocks of reporters showed up for his press conference and subsequent practices. The move thrust the Bills into the national spotlight and with this comes expectations and pressures to succeed.

The Bills made only one selection of an offensive “skill” player in the draft and that was fourth round pick Shawn Nelson from Southern Miss. Nelson was one of the finer athletes available at any position in this draft class, and he’s also got an incredibly soft pair of hands. He’s an immediate upgrade at the tight end position and may be a legitimate threat right out of the gate.

This is a huge year for Edwards as he enters his third season in the NFL. He has legitimate weapons with Evans, T.O., Lynch and Jackson and he will be facing significant pressure to win in a tough division. Owens will certainly help Edwards just by his mere presence on the field, but we all know it’s just a matter of time before T.O. tests his leadership qualities.

With Lynch suspended for the first three games of the season, Jackson will be the featured back for the Bills and as a result, is a great value early in the season. While he may lose some touches to veteran Dominic Rhodes, look for Jackson to get 15-to-20 carries a game until Lynch gets back. Lynch’s situation will leave Fantasy owners with a difficult decision on draft day. With only 13 games maximum and a potential time-share with Jackson, Lynch may not be the top 12 running back option he was going into last season.

The addition of Owens should benefit Evans more than anyone. Evans has been a break-out candidate for a few years, but the threat of Owens should allow Evans to see less schemes focusing on him. The Bills’ offense isn’t a flashy unit despite reports that they have consulted Jim Kelly to incorporate a no-huddle offense into their playbook. Evans is a great mid- to upper-level receiver to target, but I don’t foresee a double-digit touchdown season for T.O.

As I discussed, the rookie Nelson may be inserted as the Game One starter for the Bills. His athleticism and pass blocking gives him the edge over Robert Royal, who caught 33 balls last year for 351 yards. Should Nelson be given the starting job, he would be a decent late-round flier.

The Bills’ defense and special teams finished the 2008 Fantasy season right in the middle of the pack. They are expecting most of their top defense players back in 2009 and the addition in the draft of DE Aaron Maybin at No. 11 overall and DB Jairus Byrd at No. 42 overall bodes well for the defense. The unit is a decent low-end number one option.

By Jordan Frank
Tags: 2009 NFL Draft Kit
This entry was posted on Saturday, June 6th, 2009 at 10:22 am and is filed under 2009 RotoRob NFL Draft Kit, FOOTBALL, Jordan Frank, Team report. You can follow any responses to this entry through the RSS 2.0 feed. Both comments and pings are currently closed.