A Little Bit of History Repeating 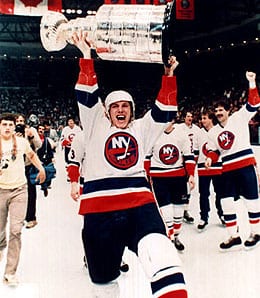 The sight of Mike Bossy hoisting the Stanley Cup was once commonplace.

So, any of you NHL fans out there remember the last time the same two teams squared off in the Stanley Cup Finals in back-to-back seasons? With both Detroit (although the Hawks went a long way towards getting back in this series Friday) and Pittsburgh just two wins away from a rematch in the finals, it’s a fair question to ask right now.

Well, you’ve got to go back a quarter of a century to find the answer. In 1982-83, the New York Islanders, led by Mike Bossy and Bryan Trottier, capped the last true NHL dynasty by winning their fourth straight Stanley Cup, downing the young, but talented Edmonton Oilers. The following season, Wayne Gretzky’s Oilers turned the tables, taking out the veteran Islanders (who also featured Denis Potvin, Billy Smith, Bob Bourne, Brent Sutter and John Tonelli) and winning their first out what would be a run of four Stanley Cups in six seasons.

Since then, no two NHL teams have met in the Finals in consecutive seasons – a real hallmark to parity in the game.

The Wings, under GM Ken Holland, have built the closest thing to a dynasty the NHL has seen in years. As assistant GM, he won the Cup in Detroit in 1997; since he took over the GM duties after that season, the Wings have won three Cups in 10 seasons, and are six wins shy of a fourth title in 11 seasons.

Can the upstart Penguins, so disappointed by last season’s loss to Detroit, play Edmonton to Detroit’s Islanders?

Of course, first Detroit has to get past the Blackhawks, a team that perhaps doesn’t have the starpower the Pens do, but man, do they ever have the young talent. Missing Pavel Datysuk to a foot injury, the Wings succumbed to the Hawks in overtime Friday to suffer their first loss of the Western Conference Final. Datsyuk had recorded an assist in three straight games, appearing to finally be getting untracked after a rather sluggish playoff.

The fact that the Wings have advanced this far with their leading scorer playing such a small role says so much about the depth of this organization. Amazingly, the Hawks have finally found a way to slow down Henrik Zetterberg as well. He had recorded points in 10 of 11 playoff games, but Chicago managed to keep Zetterberg off the scoresheet the past two games.

Yet even without contributions from their two leading men, the Wings were but a shot away from taking a stranglehold 3-0 lead in the series.

If you took Nicklas Lidstrom in your playoff pool, you’re making off like a bandit. After a goal Friday, he’s now averaging almost a point per game in the postseason. However, it was his broken stick that helped facilitate the winning goal in overtime for Chicago in Game Three, and he wound up an extremely uncharacteristic -2 for the night.

Chris Osgood, who did not exactly have a banner year this season, has been lights out in the playoffs, and he looked absolutely spectacular in saving 67 of 71 shots to help Detroit jump out to a 2-0 series lead against the Hawks. Friday, however, he was decidedly more vulnerable, giving up more than three goals in a game for the first time in almost three weeks. He’ll have to be sharper than that Sunday afternoon, or else Chicago could tie this series. Most consider Osgood the Wings’ Achilles’ Heel, and so far this postseason, he’s proved them wrong. However, if the goalie who struggled so much in the regular season suddenly shows up again, Detroit will find itself in serious trouble.

Those of you that enlisted Dan Cleary for your playoff pool are looking like freaking geniuses. Although he set a career high with 26 assists this season, Cleary hardly had a banner year. However, since the playoffs have begun, he’s taken his game to a new level. And although he failed to score a goal Friday for the first time in four games, he did log an assist, giving him four goals and one helper in the past four games. He’s averaging almost a point per game, is a ridiculously good +15 and is one playoff goal shy of reaching 50 per cent of his goal scoring production from the entire regular season. Cleary’s exploits have definitely lessened the impact of Zetterberg and Datsyuk playing below expectations. In fact, you’ve got to figure if Detroit manages to defend its title, Cleary will deserve some consideration for the Conn Smythe Trophy as playoff MVP.

More good news for the Wings came in the form of Marion Hossa’s first multi-point game in over two weeks. His struggles in the playoffs have become a real storyline, but Hossa – despite less ice time than normal – helped key the Wing comeback by logging a pair of assists on Friday. Still, evidence of the three-time 40-goal man’s scoring prowess has been scant of late. In fact, other than a two-goal effort in the deciding game against the Blue Jackets and another pair of goals in Game Four against the Ducks, Hossa has failed to bulge the twine in these playoffs. He’s due for a breakout game real soon, and that spells trouble for the Hawks.

Johan Franzen, who ripped Chicago for a goal and two assists in the opener, has gone silent in the past two games. He enjoyed a career year (71-34-25-59), but has raised his play in the postseason most impressively with a team-high nine goals and 18 points in 14 games. As good as Cleary has been this postseason, this is the early favourite for the Conn Smythe Trophy if Detroit is still standing at the end.

By RotoRob
This entry was posted on Saturday, May 23rd, 2009 at 11:23 am and is filed under HOCKEY, RotoRob. You can follow any responses to this entry through the RSS 2.0 feed. You can skip to the end and leave a response. Pinging is currently not allowed.