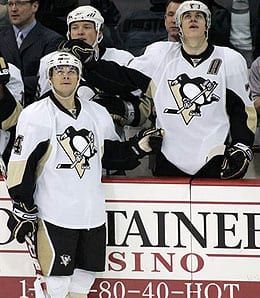 The goals were flying in so fast Thursday that even Chris Kunitz (left) potted one.

Conventional wisdom says teams get more defensive as they move deeper into the playoffs. But someone forgot to tell the Penguins and Hurricanes in Thursday’s Game Two. The two teams combined for 11 goals, with three coming from the recently unstoppable Evgeni Malkin.

Perhaps most miraculously, Penguin Chris Kunitz, without a goal in the playoffs, finally lit the lamp.

Obviously, it was a tough night for goalies Cam Ward and Marc-Andre Fleury, but one that kind of felt a long-time coming.

This was a pretty big loss for Carolina, so it’ll be interesting to see how/if it bounces back from the smack down.

Over in the Western Conference Finals, the big story is Pavel Datsyuk, who’s pretty much disappeared from the playoffs amid rumours that his alleged sore foot is actually a more serious injury. He’s no guarantee for Game Three Friday night, but Detroit has been handling Chicago pretty well, dominating through puck possession and team speed. Also helping things is Blackhawk defenseman Brian Campbell’s inability to keep the puck on his stick in overtime situations.

And still, despite two teams leading the Conference Finals two games to none, it’s still been great hockey. Unless you’re from North Carolina or Chicago. Then, it’s got to hurt.

Erik Johnson has yet to live up to his draft status as the No. 1 overall pick in the 2006 draft, and missing the entire 2008-09 season thanks to a golf cart injury did not help matters. The good news is he’s very close to being cleared and will soon be back on the ice fully healthy. We consider the Blues a serious team of the future, but toss a healthy Johnson and his puck moving ability into the mix, and St. Louis becomes a squad that must be watched very closely next season.

By Steven Ovadia
This entry was posted on Friday, May 22nd, 2009 at 9:55 am and is filed under HOCKEY, Ice Chips, Steven Ovadia. You can follow any responses to this entry through the RSS 2.0 feed. You can skip to the end and leave a response. Pinging is currently not allowed.