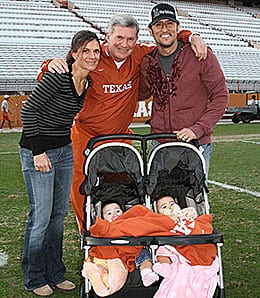 At this point, the twins have more Fantasy appeal than Nomar Garciaparra (right).

Boston Red Sox captain Jason Varitek looked just about done as a Fantasy asset after struggling through the worst season of his career in 2008. He got off to a fine start this year, but once May rolled around, the former Georgia Tech star began to scuffle again, and he’s been winding up on the wire as a result. But I think he might be worth another look before we completely dismiss him. For starters, it looks like he’s turning things around, with hits in five of six games before getting the night off in Tuesday’s opener of the Toronto series. Varitek has definitely been hitting better this season, but most impressive is the fact that his power is back. Saturday he launched his fifth dinger of the season, and – believe it or not – that puts Tek on pace for a career-best 26 homers. Yes, his walk rate is down for the second straight season, but he’s also cut his strikeout rate this year, and the more aggressive approach he’s taking at the plate seems to be working – so far. We’ve been expected the Red Sox to part ways with Varitek for several years now, but they keep re-signing him. And this season, at least, it seems wise for Fantasy owners to follow suit.

Another veteran who is starting to get dumped in some leagues is Andy Pettitte. And in this case, I can’t disagree. Thank Pink Floyd for great run support, eh? Pettitte is somehow 4-1 despite his shoddy command. He came out of the gates strong and pitched well in April, but look what’s happened since May arrived: in four starts and 23 1/3 IP, he’s been tattooed for 35 hits, 14 runs (13 earned) and five homers. He’s walked 10 against just 12 strikeouts during this stretch, yet is 2-0. Uh, okay. With the Phillies in town Saturday, I don’t like Pettitte’s chances of turning his ugly May around just yet. What concerns me most is how hard he’s had to work to achieve these middling results: 106 pitches per start – by far the most he’s thrown in his career. If you can deal Pettitte to someone desperate for pitching before his ERA soars and possibly his record collapses to match his peripherals, now’s a great time to do so. A pitcher who’s 4-1, 4.18 doesn’t sound like a bad bet. Unless you look closer, that is.

While we’re discussing fading vets, how about Nomar Garciaparra? He is supposed to be activated from the DL Wednesday, but it doesn’t sound like he’s ready to return from his calf injury. What a shocker. Jeez, I hope your Fantasy team wasn’t banking on Nomah’s activation. We ranked him as the 39th best third baseman in the preseason, but that seems extremely generous, as he’s never been worse. Out since April 29, Garciaparra is now only worthy of a roster spot in an extremely deep AL-only league, and even then, I have a hard time recommended him. He’s “only” 35, but with all the injuries in the past six years, it seems like he’s 45. The fact that he probably won’t qualify at shortstop again next year – assuming he plays on, which is a huge assumption – only worsens matters for prospective Garciaparra owners.

Orlando Cabrera, whose offensive decline has continued this season, has shown a bit of life recently, going 5-for-12 in his last three games with two homers and a walk. The dingers were a particular welcome sight considering that O-Cab had not displayed any extra-base pop up to that point. His batting eye has been very good this season, however, so there’s definitely reason to believe his BA will continue to rise towards normal career levels, but the power has been in decline for a very long time, and now that he’s in Oakland, he no longer steals bases as that’s not the A’s game. I suppose there’s a reason Cabrera has been getting dumped in a few leagues – not to mention the fact that he’s with his fifth MLB team in six seasons. And while he’s hitting better of late, I wouldn’t be using him Wednesday if I was in a daily league – Cabrera is just 2-for-17 lifetime off Ray starter Scott Kazmir.

Did I jinx Doug Mientkiewicz? Just days after I said he wouldn’t last with the Dodgers until the All-Star break, he dislocated his shoulder and required an operation that will keep him out until at least the All-Star game and more likely September. Sorry, dude. The ironic part is that after I dissed him — obviously driven to prove me wrong — he recorded hits in back-to-back games, including a big two-run double.

Johnny Damon, who went 2-for-4 with two runs and an RBI Tuesday to run his newest hit streak to four games, has been absolutely unbelievable this year, earning a nod on our early season All-Star team. But at the age of 35, is Damon really headed for a career year? How much of this is real and how much is an illusion? I’d have to say, in looking at the whole package, Damon is a superb sell-high candidate. He’s an excellent ballplayer, and the fact that he’s been healthy so far this season has been great, but there are concerns here. Ten homers already? That puts him on pace for over 40 long balls and considering Damon has never even launched 25 in any one season makes me think that this is unrealistic. Right now, Damon is hitting twice as many flyballs as groundballs. While he’s always been a flyball hitter, we’ve never seen this extreme a ratio. It’s fair to assume that will correct itself over time as well. Then, there is the lack of running. While he’s perfect on the basepaths so far, Damon isn’t stealing bases at anywhere near the rate we’re accustomed to seeing. Right now, his owners don’t care because Johnny Damon is looking more like Johnny Bench with the home runs, but once that corrects itself, are we going to be left with a high average hitter who isn’t stealing many bases? The fact that Damon’s walk rate has slipped for a second straight season is another reason to think now is the time to peddle him to the highest bidder.

By RotoRob
This entry was posted on Wednesday, May 20th, 2009 at 1:41 pm and is filed under BASEBALL, Fantasy Notes, RotoRob. You can follow any responses to this entry through the RSS 2.0 feed. You can leave a response, or trackback from your own site.