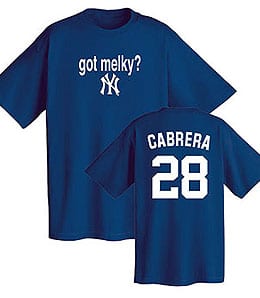 Melky Cabrera is not getting much love.

We recommended picking him up late last month, but Melky Cabrera remains available in most leagues, and I can’t figure out why. Yes, he slowed down a bit this month, but after a 2-for-4 night Monday with a run and a ribbie, he appears back on track. Since regaining the starting CF job, Cabrera has played extremely well. He’s stayed healthy so far this season, and is showing more extra base pop than ever. Better yet, the level of patience Cabrera showed as a rookie has finally returned and he looks headed for his first .300 season as a result – a sweet bonus for owners who watched him labour through last year’s disaster when he plunged to fringe Fantasy use. Need some help in the outfield? Once again, we suggest going the Melky way.

Some people are getting a bit fed up by A.J. Burnett, but control problems notwithstanding, I’m seeing slight progress here. Two of his three starts this month have been quality outings, but he’ll have his hands full Friday when the Phillies – the NL’s best-hitting road team — come to Yankee Stadium. On the plus side, Burnett has looked sharper at home (4.15 ERA). Okay, yes, the walks are extremely worrisome. Burnett is simply issuing way too many free passes this season, and that’s a trend that seems to be getting worse, not better. Sunday, for instance, his results looked great, but if the Twins could have simply delivered a key hit or two, those six walks surely would have hurt Burnett far more. In his last two starts, he’s walked 10 batters in just 14 1/3 IP, and that just ain’t gunna get it done in anyone’s estimation. We wondered whether the investment in Burnett and C.C. Sabathia was going to get the Yanks back in the playoff picture, and while the jury is still out on that one, so far, they’re pretty damn close, showing slight improvements over last season and gaining serious momentum recently with six straight wins. Generally, that’s been in spite of rather than as a result of Burnett and Sabathia, but CC’s last two starts have been more of what we’re accustomed to seeing and, as we mentioned, Burnett is pitching better. In his only loss of the season, two starts ago, Burnett actually didn’t pitch too poorly, but he was simply outdueled by ex-teammate Roy Halladay, a fate that has befallen many a pitcher over the years.

By RotoRob
This entry was posted on Tuesday, May 19th, 2009 at 12:05 am and is filed under BASEBALL, Fantasy Notes, RotoRob. You can follow any responses to this entry through the RSS 2.0 feed. You can skip to the end and leave a response. Pinging is currently not allowed.