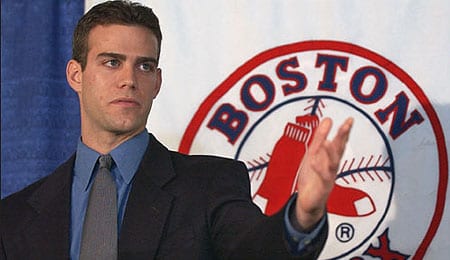 What did Theo Epstein do to get the BoSox such a favourable schedule?

Having dropped four out of six on their just-completed Western trip, the Boston Red Sox have plenty of things to be concerned about. They also have plenty of reasons for optimism.

Sure, they’re now three games back of the still-cruising Toronto Blue Jays (how long can that continue?), but the Sox control their own short-term destiny with the Jays visiting Fenway for a crucial three-game set starting Tuesday.

And yes, the rest of the AL East is making noise. The Yanks are surging with five straight wins to pull within a game and a half of the Sox; Tampa Bay is showing signs of life. Hell, even the Orioles are holding their own lately.

Yet, the BoSox remain the AL Wild Card leader and guess what? They don’t have to go west again. That’s right – it’s mid-May and the Red Sox are finished with the Western part of their schedule already. Who did Theo Epstein blow to get that sweet deal?

Of course, there’s still the issue with a No. 3 hitter who can’t hit his way out of a wet paper bag right now. Boston had David Ortiz sit all three weekend games in the hopes that he would shake off the cobwebs. We’ll have to see how that plays out, but it wouldn’t surprise me if Big Papi is shifted out of the three-spot real soon.

Fortunately, Kevin Youkilis, now the indisputable offensive leader of this team (but on the DL with an oblique strain), will start his rehab assignment Monday at Triple-A Pawtucket. He’s expected back with the BoSox on Wednesday, just in time to provide them a spark right in the middle of the big series against Toronto.

We discussed the sorry state of the Red Sox rotation earlier this month, so there’s no need to rehash here, but suffice to say that Josh Beckett – while still not his Cy Young self – has been much better since then. He’s definitely headed in the right direction.

Unfortunately, Jon Lester has been shelled in his last two starts, and suddenly you can add control problems to the mix.

And while Brad Penny’s numbers don’t exactly scream ‘pick me up off the wire,’ I really do think he bears another look. In his last three starts, he’s showing signs of life. Despite 21 hits and 10 runs allowed in 18 2/3 IP, I’m encouraged by the fact that he has not given up a dinger – those are his first three starts without doing so – and that he’s walked just five and has struck out 14. Baby steps, perhaps, but I’d be looking to pluck Penny off the wire if I had an open slot. His hit rates are down slightly overall, but are improving dramatically since that ugly April.

Justin Masterson has proved to be an astute waiver wire selection, and after taking a couple of poundings earlier this month, has bounced back in a pair of no-decisions (12 1/3 IP, 14 hits, four runs, one homer, four walks, nine strikeouts). Given that his rotation spot is likely going to disappear this week with the expected return of Daisuke Matsuzaka, there’s little reason to add Masterson to your roster at this time. He’s been too hittable this season, but the youngster’s strikeout rate has risen and his command has been solid, suggesting to me that when Masterson can finally earn a regular rotation spot, he’s got a good chance to run with it and be a strong Fantasy play. For what it’s worth, he’s been slightly better pitching out of the bullpen, but he probably won’t have enough value to be useful if he’s not starting.

The return of Youkilis will obviously provide a huge boost to the Boston attack. Out of action since May 5, Youkilis has had a little difficulty staying healthy from season to season, but he has managed to avoid major injuries, so it’s not a big concern. He was absolutely hitting the cover off the ball and was tremendously productive before he got hurt, so hopefully Youkilis won’t take long to find his groove. The Greek Gods of Walks (who never really has been a major walk man, ironically) has an OBP of .505 through the first 25 games of the season. How sick is that? Fantasy owners should note, however, that Youk has only made one appearance at third base so far; that is something to monitor as the season progresses, for he looks likely to lose his eligibility at the hot corner for 2010, unless Mike Lowell goes down at some point. It’s definitely a consideration in keeper leagues; assuming Youkilis does not qualify at third base next year, he’ll probably never be more valuable than he is this season.

One of the reasons Youkilis hasn’t played much third (other than being out lately, of course) is that Mark Kotsay has yet to play this season because of back and calf woes. However, Kotsay is getting close, traveling with the team during the road swing. It was thought that he would be activated from the DL at some point on the trip, but the Sox plan to re-evaluate him now that they’re back in Beantown. His activation will give Terry Francona more flexibility, as Kotsay can play first base, allowing Youkilis to shift over to third and spell Lowell. Other than in extremely deep AL-only leagues, that’s the closest Kotsay will come to having Fantasy value.

By RotoRob
This entry was posted on Monday, May 18th, 2009 at 1:53 pm and is filed under BASEBALL, RotoRob, Team report. You can follow any responses to this entry through the RSS 2.0 feed. You can skip to the end and leave a response. Pinging is currently not allowed.