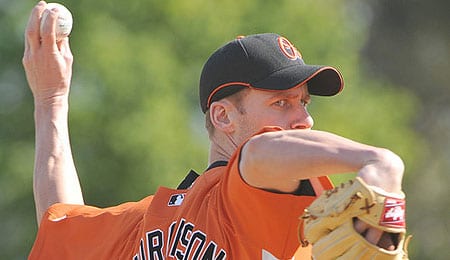 Can anyone honestly say they are surprised that Mark Hendrickson is getting ripped in the Oriole rotation?

On Thursday, we took at look at a team surprisingly tied at the top of the AL East, the Blue Jays. Today, we’ll dissect a team that has shocked no one by sitting near the bottom of the division, the Baltimore Orioles.

The O’s have dropped three straight to slip to four games under .500, and with a three-game set in Toronto this weekend, they may find the hole they’re in getting deeper very shortly.

What gives? Wasn’t this team supposed to start making its way towards .500 this year after 11 consecutive losing seasons?

In a nutshell, the team’s pitching has been truly pathetic. Yes, we all know the O’s have some superb young arms on the way (Brian Matusz, Chris Tillman and Jake Arrieta, among others), but until the cavalry arrives, B-More looks like it will continue to get shelled.

The Orioles were one of the most generous teams in the bigs last season as far as yielding long balls, and this season it’s gotten even worse. They’ve given up 40 dingers in 22 games, the most allowed in the American League. Mark Hendrickson, whose overall results haven’t been as awful as you’d expect as a starter, got ripped for four big flies in his last game, and since a fine season debut, he’s looked like firestarter and needs to be relieved of his spot pronto. Hurry up with that rehab, Rich Hill. Do not under any circumstances let Hendrickson near your fantasy team.

It’s not just the home run ball that’s been an issue, though. The O’s are simply way too hittable, dead last in BAA with opponents batting over .300 against them. This was a huge problem last year too, but now it’s almost laughable how many hits this team is giving up. The bullpen in particular has been horrid in this respect. Thankfully, Radhammes Liz and Matt Albers have been sent down the minors, but closer-in-waiting Chris Ray doesn’t look nearly ready to reclaim his old job, as he’s been battered to the tune of .344.

All told, Baltimore pitchers have given up an MLB-worst 435 total bases, 18.5 per cent more than any other team. With 26 more hits allowed than any other team, that’s more than one hit per game on average that Baltimore is giving up over everyone else. Disgusting. Jeremy Guthrie had done a solid job of limiting hits the past two seasons, but he’s been shelled for 22 hits in 15 2/3 IP in his last three starts, and 34 hits in 27 2/3 IP all told. He’s earned enough rope to stick around and get a chance to right the ship, but plenty of owners are bailing on Guthrie and if your league is under, say, 15 teams, you can probably find a suitable replacement for him.

The O’s are tied with the Tribe for the most earned runs allowed in the bigs. Adam Eaton has given up 17 earned runs in just 21 1/3 IP, yet his rotation spot is reportedly safe for the time being. He actually gained a bit of Fantasy traction with his solid start against the White Sox last week, but after he got ripped by the Halos on Tuesday, there was probably a hell of a lot of buyer’s remorse. Eaton had moments of semi-usefulness last year for Philly, but for Baltimore he’s been a serious dud and needs to be sent packing soon.

The O’s have a few minor league options to take over rotation spots in Baltimore. Jason Berken got off to a great start at Triple-A Norfolk, but he’s now on the DL because of a groin injury and Tillman definitely looks ready, but the O’s do not want to rush him. Among the relief corps, Bob McCrory and Jim Miller, both up briefly with the team last season, are pitching very well at Triple-A and deserve another chance, while Russ Wolf also looks like he could help the Oriole bullpen.

As for the offense, the O’s were a solid contact team last year, and this season it’s been even better with the third fewest strikeouts in the majors. New shortstop Cesar Izturis was extremely difficult to strike out last year (26 Ks in 454 plate appearances), but this season has been incredible, only fanning three times in 71 plate appearances. He’s still useless (other than the steals), but the dude puts the ball in play.

Baltimore had a middling offense last year, but is one of the better hitting teams in the early going this year. Nick Markakis has been a huge part of that, as he continues to develop into one of the AL’s better hitters. His extra-base pop has slipped a bit and he’s not stealing bases this year, but a 16-game hitting streak has his BA up to .381, third in the AL. He’s been an absolute on-base machine, too, with a .460 mark – a huge bonus for those of you competing in OBP leagues.

By RotoRob
This entry was posted on Friday, May 1st, 2009 at 12:21 pm and is filed under BASEBALL, RotoRob, Team report. You can follow any responses to this entry through the RSS 2.0 feed. You can leave a response, or trackback from your own site.