Sweep Dreams Are Made of This 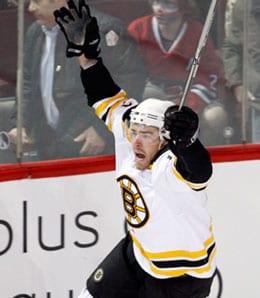 Michael Ryder stuck it to his ex-teammates in the first round.

The first round of the playoffs is usually more about who’s not around than who’s actually playing. Like a lot of people, I take a perverse pleasure in first-round eliminations.

For instance, what can you say about Montreal getting swept by the Bruins? The Habs managed just six goals, admittedly due to decimation-by-injury. The Bruins went to town, piling up 17 goals and 29 points in the series, with Michael Ryder and Phil Kessel each scoring four times.

The St. Louis Blues didn’t fare much better, getting swept by the Canucks. Vancouver had a very efficient 11 goals and 19 assists to the Blues’ anemic five goals and nine assists. Granted, St. Louis was a young team, also suffering injuries, and running on fumes after an exciting push into the playoffs. The most interesting statistic of the series, though, is the goaltending numbers. St. Louis’ Chris Mason put up a 2.34 goals against and .916 save percentage, which almost sounds like winning-team line. Of course Roberto Luongo put up a ridiculous 1.16 goals against and .962 save percentage. But Montreal’s Carey Price would have killed for Mason’s numbers. Price often looked like he couldn’t have stopped a beach ball with a bulldozer. Patrick Roy was glad he was alive, so he wouldn’t be turning in his grave.

Speaking of goaltending and Montreal ghosts, you have to be knocked out by the poise of Washington’s Simeon Varlamov, who’s posted a 1.01 goals against and .962 save percentage after one-time Canadien hero Jose Theodore imploded in Game One. Of course, you do have to factor in that Varlamov is playing against New York’s non-existent offense. The Rangers have seven goals, four assists, and a 3-1 series lead. Helping things for the Rangers is the fact that Alexander Ovechkin has just one goal in the series. And it took him until Game Four to score it.

The Wings had a fairly easy time sweeping the Blue Jackets. Columbus scored just two goals in their first three games — bothl by R.J. Umberger. Columbus goalie Steve Mason, so hot during the season, just could not handle all of that Detroit traffic in front of him. The Blue Jackets came to play in Game Four, erupting for five goals, but Detroit held on to win it with six.

Finally, many expected Philadelphia to succumb to Pittsburgh Thursday (except for diehard Flyer fan RotoRob, of course), but the Flyers found some life and managed to win Game Five dramatically with a shutout. Tough guy Arron Asham scored for the Flyers, telling you where their offense is right now. As for the Penguins, they need to follow the Flyers’ example and play with a bit more desperation, or else they may find themselves staring at a Game Seven real soon. It’s been 34 years since Pittsburgh last blew a 3-1 series lead, and I doubt it’s feeling nostalgic about that kind of disaster. Sidney Crosby got plenty of ice time in Game Five, but the Flyers made a point of targeting him with big hits all night long, and they succeeded in not only shutting him out for the first time in the series, but they hung a -2 collar on him and obviously Sid the Kid was getting seriously frustrated, taking a pair of penalties.

By Steven Ovadia
This entry was posted on Friday, April 24th, 2009 at 11:10 am and is filed under HOCKEY, Ice Chips, Steven Ovadia. You can follow any responses to this entry through the RSS 2.0 feed. Responses are currently closed, but you can trackback from your own site.