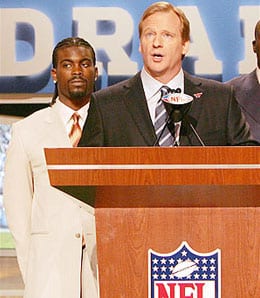 Are you ready for some more football?

The National Football League hasn’t given up on the idea of expanding the regular season by one or two games to a 17- or 18-game schedule.

“The idea has merit, I think,” NFL commissioner Roger Goodell said on Friday.

The plan calls for the elimination of two pre-season games – who would have a problem with that? – and the addition of one or two more regular season games.

A proposal is expected to be sent to team owners perhaps as early as May.

The big drawback to this plan is that the Super Bowl will be pushed back to mid-February, when it will have to compete with the Daytona 500, the NBA All-Star Game and – when applicable — the Winter Olympics.

But Goodell doesn’t believe this will be a problem. In fact, he doesn’t think fans can get enough pigskin action.

“We have not found a saturation point for pro football, which is a good thing. I don’t want to be around if we do,” he said.

The plan calls for each team to play a pair of pre-season tilts in August, have an off week on the Labour Day weekend, and then start the regular season. Each team would still get one bye week during the season and the traditional extra week between the conference championships and the Super Bowl would stay. It’s been suggested that the Pro Bowl would slot into that week, but that’s an idea rife with potential disaster.

Whether the expanded schedule means that more than the current 12 teams will make the postseason is still up for discussion.

We’ll see how the NFLPA reacts to this proposal, but one group that is definitely ecstatic about this proposition is the betting community – this is serious green in their pocket.

Good old Goodell – dreaming up economic bailouts for the bookie.

An interesting consequence of an increased schedule will be that all the single-season records will be in jeopardy. Will we think less of the man who topples Eric Dickerson’s record of 2,105 yards rushing in a season if he does it in a schedule that’s 12.5 per cent longer? How about Dan Marino’s 5,084 yards passing in a season? How long until a healthy Tom Brady breaks that? Can Randy Moss shatter his own record of 23 receiving TDs, set in 2007?

We asked a couple of our football writers what they thought of this plan and whether it would affect Fantasy owners.

From a fan’s perspective, Buck Davidson thinks the fact that football season will now run until pitchers and catchers report is a “beautiful thing.”

However, he adds, from a Fantasy standpoint, more games could mean some teams lock up playoff positions a week earlier, meaning two games of rest/cameo appearances for the studs rather than one. It could also mean a faster hook earlier in the season when the game is out of hand (in either direction). “I can’t see it affecting my draft strategy a great deal – though I might shy away a bit from the older player if it’s a toss-up between him and a youngster,” Davidson says.

Derek Jones and Andy Goldstein have often written about the “370 curse” (how running backs are affected in the long-term after seasons of 370 or more carries) and that very consideration, Jones says, “is one of the reasons I don’t like expanding the schedule.”

For coaches who can’t figure how to balance carries, Jones says, it’ll probably shorten backs’ careers — especially those who play in the playoffs.

Tell us how you really feel, Derek.

There you have it, Fantasy football owners: an expanded schedule, while fantastic from a fan standpoint, means expanded headaches managing your roster over the course of the season.

By RotoRob
This entry was posted on Saturday, April 25th, 2009 at 12:10 pm and is filed under Draft strategy, FOOTBALL, RotoRob. You can follow any responses to this entry through the RSS 2.0 feed. You can skip to the end and leave a response. Pinging is currently not allowed.