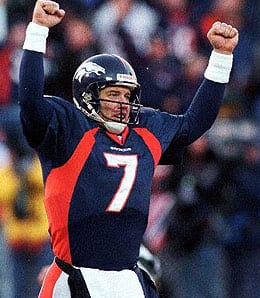 Want to enrage a Cleveland fan? Show him this picture.

The Cleveland Cavaliers, resting most of their regulars, failed to tie the NBA record with their 40th home win on Wednesday night. But make no mistake: Quicken Loans Arena has become the hardest place for a road team to come away with an NBA win. And get this: apparently, images designed to whip the home town fans into a booing frenzy are put up on the video screen when opponents go the free throw line. Among the hate-inducing shots: Michigan, Boston Red Sox and John Elway pics seem to do the trick best.

Speaking of Elway, did you hear that his son Jack left the Arizona State football program last week? Apparently, “he’s just tired of football and wants do something else with his life,” according to ASU coach Dennis Erickson. Something else? Like what? Be a trust fund baby? Hey! Actually, that’s my goal as well.

While we’re talking Sun Devils football, they’ve got this young new quarterback this year named Brock Osweiler. He’s 6’8”! And that is one serious rarity for a QB. The only signal caller that tall to ever play in the NFL was failed first rounder Dan McGwire, brother of Mark. Gonzaga tried to recruit Osweiler to play basketball, but he ultimately decided he’d rather play football.

With the NFL draft less than two weeks away, we’re heavily into mock draft season. I’ve seen a couple where the Oakland Raiders are projected to take Missouri WR Jeremy Maclin with the seventh overall pick. This guy’s speed with JaMarcus Russell’s arm could be a great combination down the road.

The 2009 NFL schedule is out now, by the way. Just over 150 days to go before the start of the season. Are you ready for some football?

With Nate Washington gone, Martin Nance could be a player to watch on the Steelers. Ben Roethlisberger’s former college teammate is looking to stick as a third receiver for Pittsburgh.

Now that Mark Sanchez has decided to enter the draft, there will actually be a competition for the QB job at USC for the first time in over half a decade.

How the hell do the Steelers win the Super Bowl and wind up getting an easier schedule the next season? What a crock of shit.

The New Orleans Saints, who got back to .500 last year, should vault over that this season, as they too have an easier schedule in 2009.

On Thursday, the Arizona Sports Hall of Fame will induct four new members, the first new entrants since 2002. Among the inductees: Bob Horner and Darren Woodson. Horner burst onto the scene, going directly to the majors after the draft. He enjoyed a great rookie year, taking home NL ROY honours right after winning the Golden Spikes as college baseball’s top player. Injuries cut Horner’s career short, but he still wound up driving in 685 runs in 1,020 career games.

The Arizona Cardinals are listening to offers for Anquan Boldin. If he winds up in Dallas, as rumoured, RotoRob football writer Andy Goldstein – a long-time Boldin man-crush victim who relocated in Dallas a couple of years ago – might die from sheer pleasure.

How about the season debut of MNF this year? Terrell Owens’ debut as a Bill and Tom Brady’s comeback game, not to mention the old AFC East rivalry juices that be flowing — now that’s a recipe for a classic.

By RotoRob
This entry was posted on Thursday, April 16th, 2009 at 8:43 am and is filed under BASEBALL, BASKETBALL, FOOTBALL, RotoRob. You can follow any responses to this entry through the RSS 2.0 feed. You can leave a response, or trackback from your own site.