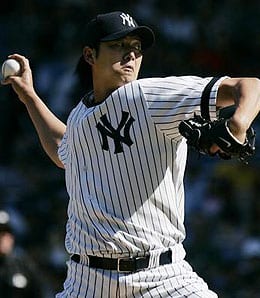 Has anyone gotten off to a worst start than Chien-Ming Wang?

The Yanks had to play their first nine games on the road, so no one is complaining about their 5-4 start. Since coming home to officially kick off the new Yankee Stadium, the team has split the first two games of its four-game set against Cleveland. Friday night’s win — the first for the team ever at its new home — pulled the Yanks within a half game of the second-place Orioles in the AL East.

Saturday afternoon, New York will look to take the lead in this series, but it’s pinning its hopes on struggling starter Chien-Ming Wang. Few have gotten out of the gates slower than Wang this season, and he’s already winding up on plenty of waiver wires as a result. If you thought his first start was ugly, his second outing was simply disastrous. All told, through 4 2/3 IP, Wang has yielded 15 hits, 15 runs and six walks while striking out just one.

His WHIP is an unsightly 4.50 and opponents are batting a video-game like .600 against him in the early going. Where the hell is that dude that had back-to-back 19-win seasons? And despite missing half of 2008 with a foot injury, Wang showed plenty of good things, holding opponents to a .249 average and upping his strikeout rate while going 8-2.

The problem here is that his sinker is not sinking, and after being out since June of last season, Wang may simply be extremely rusty. Of course, the long layoff doesn’t explain how Wang pitched pretty solidly in Spring Training, showing nice control.

On the plus side, Wang has done very well against Cleveland in his career, with a sub-3.00 ERA through five starts. At home, his record against the Tribe has been even more impressive (2-1, with an ERA just over 2.50). On Monday, however, after Wang was stung by the Rays for eight runs in just one freaking inning (which tied his career high for runs allowed in a game), manager Joe Girardi understated that “whatever could go wrong tonight went wrong.” No kidding — say it aint so, Joe.

Fantasy owners would be well advised to put Wang on their bench for the time being, especially Saturday against the solid Indian offense on the national stage (this is Fox’s Saturday Game of the Week). You can’t trade him now, obviously, so ignore those low ball offers. He did change his routine this week, throwing to live hitters Wednesday isn’t of the usual side session work, but I’d still give Wang a few starts to work through this before you do anything rash.

By RotoRob
This entry was posted on Saturday, April 18th, 2009 at 9:22 am and is filed under BASEBALL, Fantasy Notes, RotoRob. You can follow any responses to this entry through the RSS 2.0 feed. You can leave a response, or trackback from your own site.