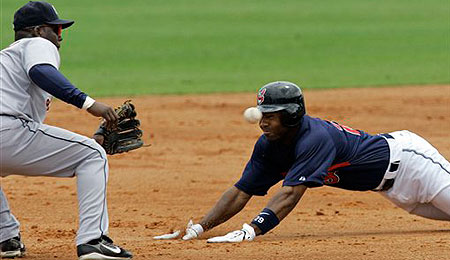 New Tiger shortstop Edgar Renteria should provide a boost to the pitching staff with his stellar glovework. (AP Photo/Tony Dejak)

No one doubts that the Detroit Tigers will score their share of runs this season, but if this team has designs on returning to the postseason after sliding last year, much of it will rest in the hands of the rotation and bullpen.

Let’s deal with what we know first. Detroit was second in the AL last year in batting, runs and slugging percentage. Clearly, this lineup can rake, and with Miguel Cabrera and Edgar Renteria now included, it’s going to be an even more potent attack.

Leading off is Curtis Granderson, who last year became just the third major leaguer (and first since Willie Mays) to put up at least 20 homers, 20 doubles, 20 triples and 20 steals in one season. He also hit .300 and ranked third in the AL in runs scored. Oh, did we mention it was just his second full season? By the way, Ivan Rodriguez will lead off against lefties, with Granderson, who struggles against southpaws, batting eighth or ninth.

Placido Polanco, coming off a career year, bats second. He’s one of the best contact hitters in the game, and just enjoyed his first 100-run, 200-hit season.

Gary Sheffield, who had a strong recovery last year, bats third. Although his days as a .300 hitter appear over, he’s still a feared slugger and top run producer.

Batting cleanup is Magglio Ordonez, who again stayed healthy last year while enjoying one of his finest power seasons.

Newcomer Cabrera bats fifth, bringing his stupendous batting averages and fantastic slugging over from the Marlins. Still just 24, would it be shocking to see him make a legitimate run at the Triple Crown soon, especially in this lineup?

Batting sixth is Carlos Guillen, who enjoyed another excellent season, as some of his doubles turned into homers. The patience he showed in 2006 deteriorated somewhat, however, taking his BA down under .300 after two straight .320 seasons.

Guillen is followed by Renteria, I-Rod and Jacque Jones.

This team will make a mockery of a lot of AL pitching staffs. But, will the pitching support the offense?

The Tigers finished 11th in the American League in quality starts last year, a figure that simply must go up to protect a bullpen already without the injured Joel Zumaya and Fernando Rodney, and also still missing Francisco Cruteca (visa problems). Relying on Todd Jones to once again defy the odds seems a sketchy proposition.

Opening Day starter Justin Verlander will be great, but the Tigers need a major bounce back from inconsistent Jeremy Bonderman, who scuffled badly in the second half last year. They will also need lefty Kenny Rogers to stay healthy and rebounds from fellow lefties, newcomer Dontrelle Willis and holdover Nate Robertson. Willis is already complaining about forearm soreness, so that’s not a good sign. He says he’s fine, but I’d monitor this situation.

Certainly improved defense, thanks to the addition of Renteria at short (a move that allowed the team to shift Guillen over to first base), will help the pitching staff.

By RotoRob
This entry was posted on Monday, March 17th, 2008 at 3:01 pm and is filed under BASEBALL, RotoRob, Team report. You can follow any responses to this entry through the RSS 2.0 feed. You can leave a response, or trackback from your own site.