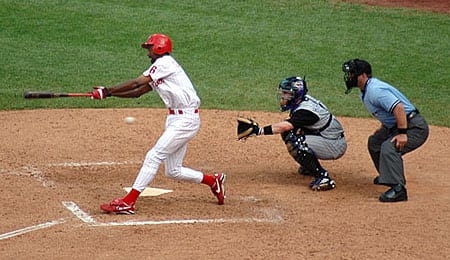 If Doug Glanville was as good at making contact as he is at writing, he’d be in Cooperstown.

So? How was your Opening Day? It’s baseball fans’ version of Christmas morning, the day everyone wakes up in the morning tied for first place in our respective fantasy leagues, dreaming of a season worth of possibilities.

I read a fantastic take on Opening Day on Monday evening in The New York Times, which posted a wonderful guest column by former big leaguer Doug Glanville. This Ivy Leaguer (he attended U of Pennsylvania) was always known as being one of the more intellectual players that ever donned a uniform. His column appears occasionally in the Times, and he’s working on a book written in a similar style.

Anyways, here are some of the highlights from Opening Day 2009:

By RotoRob
This entry was posted on Tuesday, April 7th, 2009 at 12:36 pm and is filed under BASEBALL, MLB Today, RotoRob. You can follow any responses to this entry through the RSS 2.0 feed. You can skip to the end and leave a response. Pinging is currently not allowed.