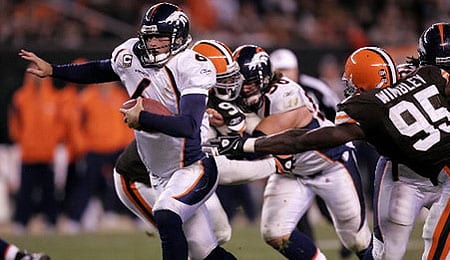 Will Jay Cutler (left) fit in with Chicago’s conservative offense or are the Bears ready to change their gameplan?

The Jay Cutler era in Denver is kaput. Chicago delivered quarterback Kyle Orton, two first round picks (’09 and ’10) and a 2009 third round pick to the Broncos in exchange for Cutler and a fifth round pick in the upcoming draft.

What does this do for the Bears? It could give them a legitimate quarterback for the first time since Jim Harbaugh back in the early ’90s (gulp). Harbaugh, the head coach of Stanford Cardinal football, led the Bears to consecutive playoff appearances in ’90 and ’91.

This move is slightly shocking from the Chicago perspective because it has gone the way of stop gap measures over the years (see Erik Kramer, Chad Hutchinson, Jim Miller). Obviously, when starting Rex Grossman or Orton, the Bears hoped finding a long-term answer would not be a problem. Instead, Lovie Smith played musical quarterbacks and seemingly nothing firmly established for an extended period of time.

Cutler’s skill set boasts arm strength and big plays. If you’ve followed Chicago offense over the years, it doesn’t specialize in long plays because of a lack of playmakers, the overall philosophy and weather conditions. In fact, last season only the Bengals (two) and Jaguars (one) had fewer pass plays of 40 yards or more than Chicago’s three.

If Cutler can come close to his numbers last year, that would mark tremendous improvement from last season’s Ortonpalooza. A look at their numbers from a season ago shows that Cutler could potentially make a difference for a historically lackluster passing offense.

To put that in some sort of historical perspective, Cutler’s statistical performance from last year would rank near the top of the charts in Bears’ history. And that begs the question, will the Bears somewhat alter their philosophy of run, run, run, and run some more?

History says no, but then again, they hadn’t made such a bold move for a quarterback in recent years. Trading a pair of number ones doesn’t mean much if the strong-arm and strong-willed quarterback is handing off most of the time. Remember, this is the same franchise that has never had a quarterback throw for 30 touchdowns or pass for 4,000 yards.

Cutler’s biggest hurdle though may be his skill players. Her will not have Brandon Marshall and Eddie Royal to throw to and he’ll have his hands full. “The place where receivers go to die” according to former Bear receiver Muhsin Muhammad, sports an average group of receivers.

In 2008, converted receiver Devin Hester, with 51 receptions, provided the biggest threat from the wide receiver spot for Chicago. Along with Hester, the two most dangerous receivers are running back Matt Forte and tight end Greg Olsen.

From the Bears’ perspective, it finally gives them credibility at the quarterback spot. However, Cutler will have to win over teammates and buck history in the process. The Bears haven’t produced a 1,000-yard receiver since 2002 (Marty Booker). If that trend holds next season, Chicago will likely watch the playoffs from home yet again.

Meanwhile in Denver, this finally ends head coach Josh McDaniels’ biggest nightmare during his brief stint with the Broncos thus far. From a pure talent standpoint, the Broncos get the short end of the stick by acquiring Orton, but they did need some sort of quarterback this year besides Chris Simms.

With question marks at quarterback and running back (Denver must determine which of its 900 backs will be able to stay healthy and actually be effective), the Broncos must cash in on their bounty of picks.

While the move hurts Denver in the short term, with the proper handling it could prosper under the circumstances. The Broncos own three picks in the first 48 selections of the ’09 draft including two first rounders (12 and 18). Thus, the Broncos can focus on fixing their 29th-ranked defense from last season (by the way, I wonder how Brian Dawkins feels now about signing with the Broncos).

It will be quite some time before a true winner can be declared in this deal due to the number of draft picks involved. One thing appears to be clear, though. Both parties could have handled this matter in a more professional and concise manner. Their indiscretions could very well result in unhappy returns in the 2009 season.

By Derek Jones
Tags: Jay Cutler
This entry was posted on Friday, April 3rd, 2009 at 12:59 pm and is filed under Derek Jones, FOOTBALL, Transactional analysis. You can follow any responses to this entry through the RSS 2.0 feed. Both comments and pings are currently closed.