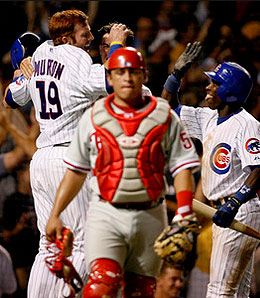 Should you keep Carlos Ruiz, centre, at $6? (Nuccio DiNuzzo/Chicago Tribune)

I was wondering if you could help me with some keeper league decisions. I currently play in a highly competitive league with 16 teams. The salary cap is $300 and we draft both NL and AL players and we can protect seven players. It’s a 5×5 league.

Each league team will purchase an “Active Roster” of 24 players broken down by position as follows:

Below are the players that I can protect along with the 2008 dollar value. Which seven would you keep?

The seven that I keep are:

The reason I go Pedro over Sheets is because of Pedro’s salary compared to Sheets. Pedro can still dominate and Sheets is just as much of an injury risk anyway.

By James Morris
This entry was posted on Monday, January 7th, 2008 at 5:51 pm and is filed under BASEBALL, Dear RotoRob, James Morris. You can follow any responses to this entry through the RSS 2.0 feed. You can skip to the end and leave a response. Pinging is currently not allowed.