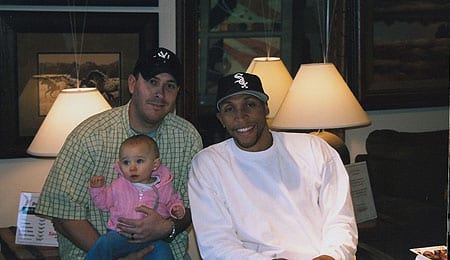 Shawn Marion, right, has looked as out of place on the Heat this season as he does in this photo. The opposing baseball caps; the mysterious baby; the ambiguously gay nature of the shot; the fact that it looks like it was taken in a furniture showroom. It’s just wrong on so many levels…

As we discussed last month, at this point, regardless of what happens in the second half, this has been a successful season for the Heat. But with five losses in seven games and a game Thursday night in Chicago against a Bulls team that’s gunning for a playoff spot and is tough at home, Miami must be relieved that the All-Star break is almost upon us.

On Tuesday night, Denver was the latest team to take out the Heat, and really, that’s nothing new. Somehow, Miami has been swept by the Nuggets in each of the last four seasons, losing eight straight overall (and nine of 10) to Denver. What’s the dealio? Okay, I get that Denver is an awesome team this year and last season Miami was totally crap. But the teams were fairly evenly matched in 2006-07 and the season before that, Miami was among the jewels of the East while Denver was middling. So why the hell can’t the Heat beat the Nuggets? Can someone explain it to me, please?

Luckily for the Heat, during its recent struggles neither of the two teams they are realistic chasing – Detroit and Atlanta – were able to take advantage, so the four through six slots in the East remain a dogfight (in fact, despite spinning its wheels lately, Miami has actually gained on Detroit). Miami, however, will need to pick things up pronto to avoid being passed by the seventh place Sixers, who have played well lately.

Miami’s turnaround this season has taken some of the spotlight off Shawn Marion’s dismal year, and given that we haven’t taken the opportunity to rip into the Matrix, it’s high time we did. Man, did we ever miss the boat when we ranked him as the fourth best forward heading into the season. The way things stand now, he’s not even a friggin’ top 40 forward! While Marion had a decent offensive effort in Tuesday’s loss (7-for-13 for 14 points), he managed just five boards, one assist and no steals, blocks or three-pointers. Remember when he was a fill-the-stat-sheet fantasy stud? While his shooting has been better since the calendar switched to 2009, Marion still doesn’t get enough touches to put up big-scoring nights. He no longer logs 40 MPG and what in the hell happened to his once strong perimeter game? Marion can’t hit from outside anymore (20.5 per cent) and he barely employs that part of his game. In fact, he’s sunk just eight lousy 3-pointers all season. This is a dude who once canned 141 in a season. Boy, does Marion ever need a change of scenery. To be honest, this is the worst he’s looked as a fantasy asset since he was a rookie with the Suns way back in 1999. Pathetic. The trade sure hasn’t worked out for either team. Phoenix no longer has an identity without Marion, and the Matrix left his game in the desert. But hey, at least he managed to hack Chris Andersen out of the game with a flagrant foul. If you can’t beat ’em, knock ’em out, right?

Did you happen to check out the American flag band aid Dwyane Wade was wearing to cover up his six-stitch cut? Nice look, dude! Of course, it didn’t stop him from pouring in 33 points.

There’s virtually no reason to own Joel Anthony, even when he’s seeing starter type minutes (as he has in the past two games, averaging 35 MPG). But if you are desperate for help in blocks, give him a look. Anthony’s five blocks Tuesday were just one shy of the Miami record for a non-starter. In less than 23 MPG of action this month, Anthony is averaging 2.2 swats per game. It’s certainly something to at least watch, especially with new starter Jamaal Magloire unable to gain any traction.

By RotoRob
Tags: Atlanta Hawks, BASKETBALL, Chicago Bulls, Chris Andersen, Denver Nuggets, Detroit Pistons, Dwyane Wade, fantasy basketball, Jamaal Magloire, Joel Anthony, Miami Heat, NBA, Philadelphia 76ers, Phoenix Suns, Shawn Marion
This entry was posted on Wednesday, February 11th, 2009 at 3:34 pm and is filed under BASKETBALL, NBA Today, RotoRob. You can follow any responses to this entry through the RSS 2.0 feed. You can leave a response, or trackback from your own site.