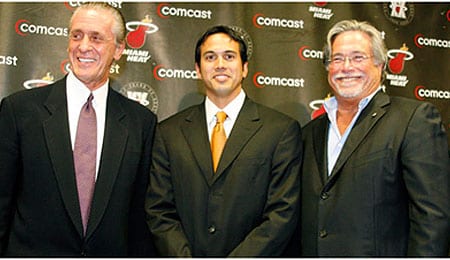 Erik Spoelstra (centre) has reason to smile given the turnaround he’s helped facilitate in Miami this season.

Regardless of how the Miami Heat’s 2008-09 season winds up, it has to be considered an unqualified success. After all, it’s only mid-January and this team has already surpassed last season’s disaster by six wins. The offense is somewhat better, the defense has improved and this team is in the thick of the Eastern Conference playoff race. But in looking at the schedule, this current season-high seven-game, 12-day road trip had the potential to really spin the Heat’s season off the rails and send it to a second straight lottery pick.

However, Miami has overcome the odds and, so far, has enjoyed success on this trip, winning its past two to improve to 3-2 with two stops to go. The Heat has held its grasp on sixth in the East, while the next three teams ahead of Miami – Detroit, Atlanta and Boston – are all failing to gain any traction in the standings. However, the Heat need to pay attention to a surging Sixer team, coming up strong from below. Saturday night, Miami makes a stop in Houston – which isn’t exactly on fire lately, but remains a very tough place to win, with the Rockets having dropped just five home games all season. Miami finishes the trip Sunday night in Oklahoma City, taking on a Thunder team that is playing much better lately and is no longer a mail-in-it W on the sked.

Erik Spoelstra, the first Asian/Filipino-American head coach in the NBA, has done a superb job replacing Pat Riley as the main court man in Miami. While the Heat could definitely be doing a better job offensively, bear in mind that it was the absolute lowest scoring team in the entire association last season. And the team’s defense – one of the few areas Miami was competitive last season – is even better this season.

One Miami player who is not impressing me recently is Mario Chalmers. Near the beginning of the season, we told you to file him away for future reference, and he certainly proved us right with his excellent play in December. However, he’s really cooling off lately, having gone just 1-for-13 for a combined four points in the last three games. He’s simply not getting enough touches so far this month to be useful, so if you have your eyes on a hot PG pickup (like Luke Ridnour or Kirk Hinrich), go ahead and make the switch. And if you’re in a league where Superintendent Chalmers has been dropped, I’d suggest you keep your eyes on the rook, as he proved he can be a useful asset. (By the way, imagine the possibilities if Chalmers was on the same team as Brian Skinner…sorry, I’m having a Simpsons moment…“Skinner!!!”)

On the flipside, it may be time to take another look at Udonis Haslem. We didn’t exactly gush over him early this season (although we did acknowledge his decent play), but Haslem has been steady this season, and with 17.5 PPG (on 15-for-24 shooting) and 9 RPG in the last two games, he’s heating up. Haslem is obviously not seeing the same kind of PT he had last year when the Heat was decimated by injuries, but his minutes have risen each month this year. If you can suck up the fact that he’s not going to offer much in the way of steals, blocks or assists, Haslem can be useful to your squad. By the way, it’s worth mentioning that, having spent his entire six-year career in Miami, Haslem is starting to show up on the club’s all-time leader list. On Tuesday, for instance, he became just the 11th Heat player to top 4,000 points and the seventh member of the 400-game club. After his recent scoring exploits, Haslem needs just three points Saturday to tie the legendary Bimbo Coles for ninth place on the team’s all-time scoring list. Speaking of legendary, please help me celebrate the first time in this site’s near three-year existence that we’ve mentioned this name. Say it with me loud and proud: Bimbo!!! And now Haslem’s name can be uttered in the same sentence – do you understand the magnitude of this moment?

Speaking of Heat history, Dwyane Wade is nearing some of his own. He’s earned at least one steal in 17 straight games, matching the second longest such run in his career. Flash recorded a steal in 18 straight games in 2005. The Miami record is 27 straight games, set by Sherman Douglas. Woah…that’s two old school Heat references. My heart can’t take this excitement.

One Heat player we discussed who might be worth a look this season was Chris Quinn, but the emergence of Chalmers has rendered him an afterthought and really only of use in a very deep league. Quinn has averaged over four dimes over the last four games, and he’s a lights-out FT shooter (he’s sunk a career-best 20 straight, matching the longest streak from the charity stripe for Miami since Blake Ahearn last season), but he’s still not seeing enough PT on a consistent basis to be useful in most leagues. Quinn spent almost half the season as the starting PG last season when the team was overridden by injuries (remember, Miami was desperate enough last season to even think Smush Parker would be useful), but has been used exclusively as a reserve this year. If Chalmers gets hurt, Quinn would be a decent option, but until then, I’d steer clear.

By RotoRob
This entry was posted on Saturday, January 17th, 2009 at 4:13 pm and is filed under BASKETBALL, NBA Today, RotoRob. You can follow any responses to this entry through the RSS 2.0 feed. You can skip to the end and leave a response. Pinging is currently not allowed.