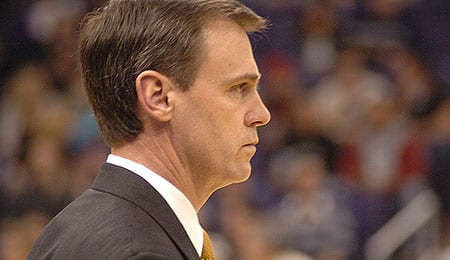 Rick Carlisle and the Mavericks aren’t looking over their shoulders as they scratch their way up the Western Conference standings.

The Dallas Mavericks aren’t ready to fold the tent just yet, apparently. The Mavs have won three straight games, including sweeping their tour of the State of Florida and now head home for a match against a very hot Blazer team that tends to be middling on the road. Don’t look now, but Dallas has passed the Suns to move into seventh in the West, and is breathing down the back of the fifth-place Hornets. Rumours of Dallas’ death have proved to be premature.

While Dallas isn’t dominating defensively like it has in the past, Rick Carlise’s crew is slightly improved its offensive numbers this season.

And clearly, the Mavs have Orlando’s number. After kicking the Magic’s ass Monday, Dallas has now won five of the past six games in this series. The fact that it was in Orlando makes it even more impressive a win for Dallas, because typically no one beats the Magic on its homecourt. Actually, lately no one has been beating Orlando anywhere, so this was a big win for a Dallas team that has had a tough time beating top clubs.

Jason Kidd flashed a bit of O Monday with 13 points while adding four steals and a block, but he continues to be horribly inconsistent, disappearing offensively for games at a time before occasionally showing up with a nice touch like he did Monday (6-for-9). For J-Kidd to start February with a fine shooting performance is a great sign as he rebounded in January (41 per cent) after a bitterly cold December (31.6 per cent). If Kidd can build on this, we might actually start seeing him reach double digits in scoring a bit more regularly. Remember that as bad as he was shooting last year before the Nets dealt him (36.6 per cent), he turned it around upon arriving in Dallas (42.6 per cent). So while Kidd hasn’t been able to match that, keep in mind that his 41.5 per cent shooting this season is actually a fair bit over his career norms.

Good sign for Dallas: The Mavs, not exactly a strong perimeter defensive squad, held the best three-point shooting team in the NBA in check, as Orlando sunk just 3-of-20 from beyond the arc on Monday (including a mere 1-for-7 in the first half). Of course, Dallas couldn’t contain the Magic’s outside game and stop Dwight Howard from going crazy (35 points, 11 rebounds). But a W is a W.

This had some shades of Dallas’ great run in recent years, when defense led the way to some huge seasons. While the Mavs are only on pace to win 48 or 49 games this season (after a disappointing 51-win season last year), their late-January run, that has carried on into February, bodes well for a possible turnaround in the second half.

Erick Dampier pulled down seven boards and scored six points before fouling out Monday, but his PT has dipped in recent weeks, and I’d only recommend him as an option in a deeper league. In fact, his PT has been dropping for a couple of seasons now, making him one of those starting centres that simply doesn’t offer enough value to be a viable fantasy option. Think guys like Zaza Pachulia and Matt Bonner. Dampier fits into that category – if you didn’t need X amount of centres on your team, none of these players would ever find their way off the wire.