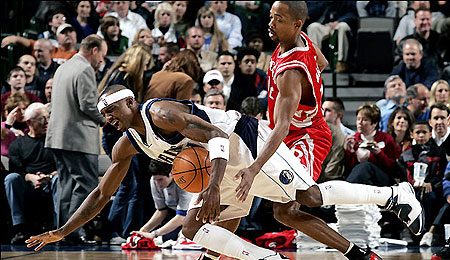 Can we just go ahead an anoint Jason Terry as the NBA’s top Sixth Man? Holy crow this dude has been sick this season. Since November 18, his worst game is 19 points. Terry is averaging 22.9 PPG in December as he continues to shine in what’s turning out to be a career year. The incredibly durable two-guard (12 games missed in 10 seasons) is getting starter minutes off the bench, and even though his perimeter game has been sliding in recent seasons, Terry is chipping in with assists, boards (3.0 per game) and doing well in steals (1.5 per game) in addition to his scoring exploits. Considering he probably didn’t go until the sixth round, the fact that he’s providing near-first round value makes him one of the top fantasy performers this season. Just imagine how far Dallas would have slipped this season without Terry. As good as he was as a starter, he’s been even more sick as a reserve.

The Mavericks are in Washington Sunday evening, and here’s one of those head scratchers: Dallas has lost three straight games to the Wizards. What’s the dealio there? Prior to that, the Mavs had won six straight in this series, but with Washington now the worst team in the East, smart money is on this current losing skid against the Wiz ending this evening.

Dallas has had plenty of problems this season, dropping seven of its first nine games (including 1-4 when Terry was starting). It was when Terry was shifted to the bench to provide offense for the second unit that things started turning around for the Mavs. With Terry coming off the bench, Dallas is 13-7 – the kind of mark we’re far more used to seeing from this team. Amazingly, he’s averaging almost three more points when he comes off the bench compared to his numbers as a starter. His move to the bench soon ignited a 12-3 run for the Mavs, so clearly it was the kick in the ass this squad so desperately needed. Of course, Dallas still has plenty of work to do – especially on defense – if it hopes to get back into the playoff picture in the West.

Jason Kidd got a nice reception Friday in his return to Jersey, and he responded by nailing a trio of treys on his way to a 17-point night. It wasn’t nearly good enough for the W, but it was nice to see J-Kidd finally put up some points after struggling offensively for a few games. His numbers are down across the board in December after he enjoyed a strong November with scoring and rebounding. Kidd has stayed healthy this season, but he hasn’t been nearly as aggressive as normal, and that’s manifested itself in a career worst one trip to the line per game. Small wonder his scoring has dipped below double digits for the season. Fortunately, that seems to be turning around recently, with 10 charity stripe trips in the past five games.

By RotoRob
This entry was posted on Sunday, December 21st, 2008 at 2:41 pm and is filed under BASKETBALL, Fantasy Notes, RotoRob. You can follow any responses to this entry through the RSS 2.0 feed. You can skip to the end and leave a response. Pinging is currently not allowed.